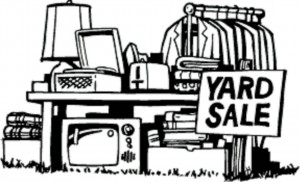 Before we get started today, I’ve had several people ask me about signed copies of the book.  I swear it’s true… I’m not just blowing smoke here.  So, I thought I’d open it up for orders again, briefly.  At the bottom of this post is a link where you can buy one, and I’ll remove it on Saturday or Sunday.  If you’d like a copy of Crossroads Road with my scrawl on it, then order away!  As always, thanks for giving a crap. [SORRY, you missed it. But the regular unsigned copies are still available.]

Toney and I are thinking about having a yard sale in the not-too-distant future.  Well, it’s Toney’s idea, of course.  I’d never come up with something like that… But I’m going to help in any way I can, and we’re going to try to get rid of some of the crap in our basement and garage.

Our basement is a mess, especially.  There are boxes down there that were sealed shut for our move to Southern California — in 1996 — that have never been opened.  Plus I just generally come with a lot of baggage, emotionally and otherwise.  I’m not really a fan of throwing stuff away.

So, I have every issue of Rolling Stone magazine that I bought during the ’70s and 80s, plus National Lampoon, Creem, Trouser Press, Sports Collectors Digest, The Sporting News, etc. etc.  I mean, it’s a metric shitload of reading material.

I also have every single zine I collected through the years, which undoubtedly looks like a mound of trash to my wife.  But it’s invaluable to me.  That’s the work of some of the most creative and interesting people in the world.  If something happened to it, I’d be despondent.

Somewhere down there is a box that contains everything that was on my desk at my old Atlanta job. I remember just throwing it all in a box, taping it up, and putting it on the truck.  I haven’t seen it since…  Under my desk calendar I kept a piece of paper where I’d note every concert I attended, sorta like Harv, I guess.  Also, the company gave us each a chunk of the Berlin Wall, which could be used as a paperweight.  (Kinda hipster, huh?) My chunk was really cool, with plenty of spray paint on one side.

Another thing I’d like to locate in that cluster-fornication:  my dad’s dog tags, from when he was in the service.  They’re somewhere around here, but I haven’t seen them since the Clinton administration.

But, of course, there’s also a lot of full-blown crap in the basement.  And that’s what we’re going to try to sell.  Furniture that’s not being used… lamps… a computer printer that’s never been removed from its box…  Also, I’ve got roughly a million compact discs, and half-a-million DVDs, from my years in the “biz.”  I might try to sell the ones I don’t care about, for a buck each, or something.  We’ll see.

Do you have much yard sale experience?  Either as a seller or a buyer?  Tell us your stories in the comments.  Have you ever found something really great at a yard sale?  Like an original Rembrandt, or whatever?  We need to know.  Also, if you’ve ever hosted one, how did it go?  What do we need to be on high-alert for?  We’re fully inexperienced and need your guidance.

I’m also interested to know what kind of cool stuff you’ve got stored away in your basement, attic, or garage.  Please tell us all about it.