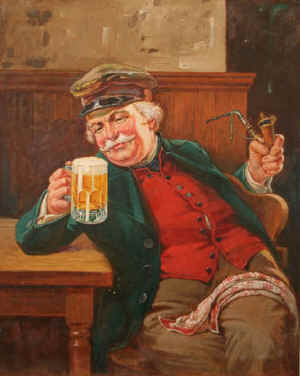 On Saturday Toney and I visited the Insufferable Beer Snob Tavern (as I call it), inside Cooper’s Seafood in Scranton.

They have a rambunctious bar there that attracts college students, and features a large deck and people projectile vomiting into fireplaces, etc.  But hidden away in the rear of the sprawling restaurant complex is another, almost secret drinkery that’s more to my liking.

The room is small, relatively subdued, tricked-out with dark wood, and looks like a library in a millionaire’s mansion, circa 1948.  And, most importantly, they sell an amazing lineup of obscure, super-snooty draft beers…  Yes, the joint has my name written all over it.

We hadn’t been there in a long time, because our lives are crazy, but used to go two or three times per month.  On Saturday there was a sign outside that said they were offering Boddington’s on tap during the month of July, served in a British pub glass you could take home.

“Cool!” I shouted, before realizing it was no longer July.  Then I got irritated that we’re so lame we missed a great promotion that ran for an entire month.

I love Boddington’s.  It was on tap in the lobby bar at our hotel in London, and brings back pleasant memories of scratching my head in utter confusion while watching a cricket match on a huge TV amongst eastern Europeans in red sweatsuits.  I wanted a couple of those glasses…

And I got ‘em.  At first the bartender said they were completely out, that they were only being offered in July.  “C’mon man, it’s July 32!” I said.  And he somehow came up with two of the things.  It was a miracle!  Only fifteen seconds earlier none had existed, yet here they were.

Then we tried a Saranac summer ale that was fairly odd.  It didn’t even taste like beer really, it was more like lemonade, or something.  I drank it, and it wasn’t as horrible as it could’ve been, but it went directly to the NEVER AGAIN file.  I generally like Saranac beers (a lot), but this one was a little too novelty for me.

And to close out the category, I went with an Uncle Teddy’s Bitter, from a cask.  By far the best beer of the day…  It was served at room temperature, was mind-blowingly good, and is exactly why I love going to Cooper’s and “exploring.”

Yes, Toney and I are the Lewis & Clark of alcohol abuse…

While at the Snobby Prick Bar & Grill, we discussed many things.  Those little Saturday excursions are almost literally the only time we’re alone, without a million distractions.  Many of our biggest decisions have been made inside various barrooms in Lackawanna County, PA (for better or worse), but usually we’re just going on and on with the goofy shit…

And I’ll use our disjointed weekend conversation as the basis for our Questions of the Day.  I have two for you today.  Neither is great, I’m afraid, but together they might add up to something semi-interesting…  And here they are:

In how many states have you been issued a driver’s license?  Can you beat me?  I’ve had licenses in five different states:  West Virginia, Norf Carolina, Georgia, California, and Pennsylvania.  Have you had more than five?  How about foreign countries?  Tell us about it, won’t you?

And if you’re married, or living with someone, what’s the percentage breakdown on the household chores, male vs. female?  I admit I could do more…  Ahem.  I say it’s 75% Toney, 25% Jeff.  But Toney believes it’s more like 85/15.

However…  I load the dishwasher after meals, unload it once the filth has been blasted-off, make our bed every day, take out the trash, mow the grass, occasionally dust and vacuum, etc.  I’m not a COMPLETE slug.  Sheesh.

What about your house?  Give us your percentages by gender, in the comments section below.

And I’ll be back tomorrow, with a big ol’ Topic Dump ™.