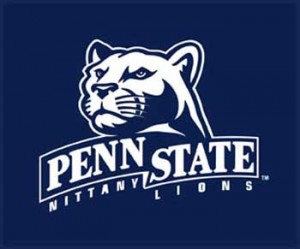 Our oldest son went off to college yesterday.  For a week, anyway.  He’s at a swim camp at Penn State, until Friday.  It’s a week of astronaut-training intensity, with the college swim coaches, and will undoubtedly be a memorable experience for him.  And hopefully valuable, as well.

There are 120 kids at this camp, from around the state.  They live in the dorms for a week, eat in the school cafeterias, etc.  It’s a little taste of college — with a shitload of swimming packed into each day.

Five or six kids from his high school swim team are participating, and we took part in a convoy of sorts with the other parents yesterday morning, all the way to State College.

I don’t really like the convoy, if you wanna know the truth.  The lead car is always going a little too slow for my tastes.  Or, if I’m the lead car, I have to worry about all the people behind me.  It’s too much responsibility.  Am I going too fast?  Have I lost anyone??  Not a fan of the convoy…

But we made it without losing anyone, and stopped at Perkins for lunch.  A whole bunch of us took over one entire room of that place.  And I had to sit at a table with people on both sides of me.  I hate that.  It’s like the clump of three seats on an airplane, and you’re assigned the middle one.  Know what I mean?

We almost never go to Perkins, because our local one smells like a wet dog, but I remembered they have a really good mega-salad there, with pieces of fried chicken on top.  I located it on the menu, and it was exactly what I was craving.

However…. I was one of the last adults to order, and everybody else opted for sandwiches.  So, I felt social pressure to also order a sandwich.  I had visions of the waitress bringing out cheeseburgers and whatnot — until they got to me.  Then she would have to use both hands to deliver a plate the size of an on-deck circle.  At that point everybody would have to make a comment about it — this lunchtime curiosity — and I’d feel kinda douchey.

Plus, salads are a little poofter, right?  I think that’s unfair, but I don’t make the rules.  So, I just went with a club sandwich, which turned out to be really good.  Mmmm… smoky turkey.

After lunch, we continued on to the check-in place — a few blocks away.  “Just the kids and one adult!” some unknown authority figure shouted at us.  So, the moms went into the building, and we dads hung around outside, chitchatting and checking our phones.

The boys’ dorm was just a few yards from where we were standing, and we carried all our son’s crap up to his room.  His roommate would be one of the other kids from his team, which was a relief.  Some were paired-up with complete strangers.  Needless to say, I wouldn’t care for such a scenario.

And holy crap, those rooms are tiny.  I’ve been in plenty of dorm rooms in my time, and this one was by far the smallest.  It was like a jail cell.  Two single beds took up 75% of the space, and behind each was a radically abbreviated desk and closet.  It felt like you could stand in the middle, extend your arms, and touch two walls in any direction.  That’s probably not an accurate memory, but it’s way it seems to me now.

Across the hall was an ancient 1950s-era bathroom, and the whole time we were there toilets were flushing non-stop.

When we got home Toney checked the prices of dorm rooms in that particular residence hall.  They’re called “small doubles,” and cost $1800 per semester for in-state students.  They’re literally a sleep chamber.  No way you could study in there, or do any real work.  Submarines probably have more elbow-room.

The other kid’s parents were there, as well.  And we were all peppering them with advice, etc.  Clearly, they couldn’t wait for us to get the hell out of there.  Both boys seemed to be in a state of high distress, because we wouldn’t leave them alone.  I finally told Toney we should leave, and all four adults said their goodbyes.

I hope he’ll be OK, I thought, as we descended inside the wonky elevator.  The campus was crawling with high school kids.  There are all sorts of “camps” going on this week — not just swimming — and the dorms were rockin’.

It felt weird leaving him there.  I’m very good at imagining the many “complications” he could encounter in such a setting.  But, of course, he’ll have a blast.  He’s infinitely more mature and responsible than I was at his age.  Heck, he might be more mature than me now…

When we got outside, someone suggested we walk over to the swimming facilities, to take a look at the pools and everything.  It was pretty impressive — especially the outdoor pool.  And as we were walking back toward our cars, we saw the boys walking across the common area, with girls from their swim team.

Man, they couldn’t WAIT for us to get out of there!

Another set of parents from our convoy was in the parking lot, and they said they were going for some ice cream at The Creamery, before they returned home.  We decided to tag along, and the place was pandemonium.  But we finally received our cones.

They were perfectly fine, but not as great as I’d anticipated.  Everybody in this area talks about The Creamery, and acts like it’s the greatest ice cream ever produced on the planet Earth.  It was good, there was certainly nothing wrong with it, but I think I was over-expecting.  Or maybe I have a chip on my shoulder?  I’m unclear.

While we were driving home, Toney and I were talking about Nancy and how she always puts people in categories.  People aren’t just people to her, they’re always “my Cuban friend,” or “my African-American colleague,” or “our Muslim neighbors.”

I told her our day probably wouldn’t impress Nancy much:  “We had a nice lunch with four white couples this afternoon, and met another white couple for ice cream.”  Heh.

Last night, around 10:00, I texted our son and he was the king of one-word answers:

Everything OK?
Yeah.
How was the workout tonight?
Good.
How was dinner?
It was good.
Where are you now?
The room.
Are you in for the night?
Yeah.
OK, good night.
Good night.

Oh, it was an exhausting conversation, filled with much detail and nuance.  For some reason I don’t think homesickness is something we need to worry about…  <sigh>

And I don’t really have a Question for you guys today, so I’ll just go with the old standby:  What did you do this weekend?

Of course, if you have anything to say about our Penn State adventure, feel free.  Do you have any similar stories, about your kids or yourself?  Please use the comments link below.