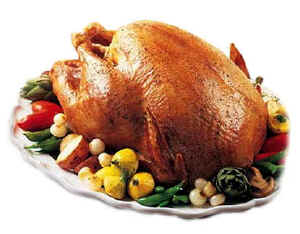 One day last week, when I was at work, Toney mentioned that she’d “burned the hell” out of some quesadillas in the oven.  I guess she put them in, got preoccupied with a phone call, and everything spiraled downward from there.  By the time the smoke alarms started chirpin’, the only thing left was three black, smoldering discs.

I remember her telling me this, but didn’t give it much thought at the time.  It was more of an exasperated, informational kind of thing.  But on Saturday it all came flooding back…

My employer gave us a frozen turkey during the run-up to Christmas.  But since we’d already bought one, we stuck the work-turkey in the basement freezer.  And on Saturday Toney decided she was gonna cook it.  In fact, she’d planned ahead and moved the basketball o’ meat from the deep freeze to the fridge, several days in advance.  You know, for thawing purposes.

On Saturday morning she turned on the oven to pre-heat, and the house filled with a horrible stink.  Then the smoke alarms started going off again.  WTS?  I came running, to see what was going on, and the main floor of our house was all smoked-up.  Good god!  I almost needed a miner’s helmet to navigate through the darkness.

“I cleaned the oven after those quesadillas, but I guess I didn’t do a very good job?” Toney said, while throwing open windows all around the place.

“Something’s on fire in there!” I shouted.   It was true.  Inside the oven was a six-inch flame, burning with great vigor and showing no signs of weakening.

“What is that, a cheese fire?” I wondered.  “Should we just let it burn itself out, or what?  I didn’t even know cheese was flammable?!”

We stood in the smoky kitchen, staring at the eternal flame through the window on the front of our stove door.  And at one point I saw the flames leap to something nearby, possibly a slice of green pepper.

“You say you cleaned that oven?” I said.  “There are vegetables in there!”  This was followed by no reply whatsoever.

And did you know that green peppers don’t burn nearly as long as cheese does?  Until Saturday, I didn’t either.

It was unbelievable.  You should’ve seen our house!  The place was full of smoke, and the boys were holding napkins up to their noses, and engaging in exaggerated coughing jags.  Andy even puked by the front door.  But he’s a puker-dog, so it’s unclear if that had anything to do with the oven fiasco.

The fire eventually stopped burning, and Toney announced she was going to engage the self-cleaning function of the oven.  I asked how long that takes, and she said four hours.

“So it’s pizza for dinner, instead of turkey?” I said.

“I don’t think anyone will shed a tear,” she answered.

Toney punched a few beeping buttons on the stove, and the display read: CLEANING.  Then the thing got impossibly hot.  The amount of heat rolling off that box was scary, like a smelting furnace, or something.  Sweet sainted mother of an alcoholic glass blower…

And the funk!  It transformed several times throughout the process, and changed flavor (or whatever).  But all were fairly disgusting.  Near the end it smelled almost metallic, like a Translucent bowel movement.

It was horrible, and amazing.  I think there was nuclear fusion happening inside our oven, and when it was over there was nothing but a post-apocalyptic landscape in there.  It was like the Road Warrior inside that bitch.

Do you have any kitchen horror stories to tell?  You know… fires, explosions, floods, decapitations, etc.?  If so, tell us about it in the comments.