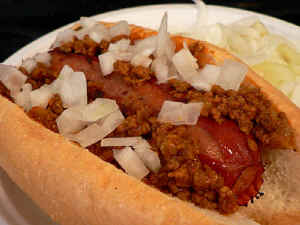 I was talking with someone who attended the Bloomsburg Fair this past weekend, and she claimed to have spent more than $100 on “fair food,” just for herself.  There was no sharing, she assured me, it was all for her.  Then, an amazing list was rattled off, and I just stood there blinking real fast, wondering if it would ever end.

I can’t remember everything, but the menu included two pork barbecue sandwiches, two gyros, a funnel cake, cheesecake dipped in chocolate, deep-fried Oreos, a “blooming onion,” cheese fries, cotton candy, perogies, and many other things.  She also ingested “about $30 worth of drinks,” including root beer, iced tea, and several slushies.

She told me this is an annual event for her.  She goes wild for fair food, and sets money aside for her yearly festival of fairway gluttony.  And she’s skinny too, which makes me somewhat angry.

Anyway, I was running her big honkin’ list through my head, analyzing it and wondering if I could put away that much food in a five hour period (the final estimation: yes), and I blurted, “Hey wait a minute!  No corndogs?”

And her mind-blowing response?  Are you ready for this?  She said, “I’ve never had a corndog in my life.”

“Let me get this straight,” I shouted.  “You LOVE fair food, but you’ve never had a corndog?  That’s like saying you’re an expert on the state of Arizona, but haven’t made it to the Grand Canyon yet.”

“But it’s a deep-fried wiener in breading,” she answered, her face all distorted in mock-disgust.

“Oh, so now you’re taking the high road?  After you just told us you ate a full blooming onion by yourself?  And weren’t hot dogs on your list?  That’s just a wiener in a bread cozy!”

It was a ridiculous conversation.  But it leads me to today’s Question, or actually Questions.

In the comments section please tell us something you’ve never eaten, which might surprise people.  I’ve mentioned this before, but I’ve never tasted Lucky Charms.  Not once.  I’m just not a fan of pencil erasers floating around in my cereal bowl, and have felt this way all my life.  As far as I’m aware, I’ve never partaken of any of the marshmallow cereals.

And I know a guy who’s never had an omelet, because he doesn’t like the way the word sounds.  You know, omelet.  He holds the same opinion about yogurt.  If it doesn’t feel right coming out of his mouth, it ain’t going in.

Do you have something that might fall into this category?  If so, please tell us all about it in the comments.  What food have you never tasted, that might shock people?

Also, what’s your favorite so-called fair food?  I like cheese fries, and chili dogs.  Mmmm… I wish I had some right now.  What about you?  It’s very important that we know your favorites.

Extra credit Question: Inspired by my omelet friend, mentioned above, tell us about the pickiest eaters you’ve ever known. I come from a family of picky eaters, but it never really took hold with me.  I mean, seriously.  I think I must’ve rebelled, or something.  Do you know any especially picky eaters?  Tell us about ’em.