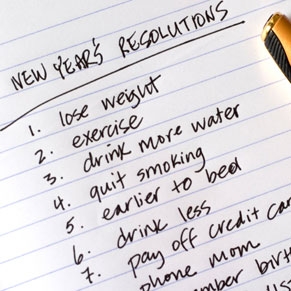 Have you ever stuck with a New Year’s Resolution for more than a few weeks?  Has it worked out, even once?  Were you able to transform some part of your life by making a change, starting on January 1, and seeing it through until it became a permanent part of your daily routine?

I’ve made such pledges, and put forth a half-assed (in some cases, quarter-assed) effort during the follow-up phase.  It’s always the follow-up that’ll get you, I’ve learned…  Everything’s smooth sailing until you’re required to take consistent action.  Wotta rip-off.

A couple of times I’ve vowed to quit drinking beer, because I thought it might make me more productive.  Plus, I think I got suckered into believing that everything I enjoy must surely be killing me.  But the exercise only made me more irritable and unhappy, and my productivity didn’t change at all.

Heck, I didn’t drink THAT much, and drink even less now.  And cutting back is infinitely better than the prospect of never tasting a Dogfish Head 60 Minute IPA again, for the rest of my life.  Shit!  Will somebody please hold me?

One year, if you can believe it, I actually went on a fad diet, starting on the first day of the year.  I think it was the Long Beach diet, or one of those deals.  I was going to turn my life over to it, lose sixty pounds, and foster the physique of a Black Crowe.

Ha!  I think I made it a week living under that horrible torture, before I cracked.  It seems like I was eating chicken breasts and slimy salads day and night.  My memory might be a bit skewed, but that’s how I recall it.  By the fifth or sixth day I was ready to stab someone in the face. I was starving, bored, and miserable.  I finally (after about six whole days) proclaimed it “bullshit” and went to Long John Silver’s (or somesuch).  Ahhh, and I could finally breathe again.  Sweet, sweet grease…

The last few years I’ve forgone the New Year’s Resolution altogether, because of my .000 batting average, but I want to give it another shot this year.  However, I’m going to keep my goals private.  They have nothing to do with health or diet, or any of that stuff, and more to do with my “professional” life.  I’d rather not get into it on the internet…  Not now, anyway.

But I’ll be drawing up a plan, trying to stick to it, and improving a few things.  2010 sucked a whole flat of eggs, and I’m not about to just sit around whining and wallowing in self-pity and allowing it to continue.  Funk dat.

And I’m gonna turn it over to you guys now.  I can’t write in here…  I wish you could experience just five minutes of this boolshit.  Sunny NEVER stops talking, the TV is blaring, and her lung-blower is humming and cutting in and out.  Cooome on, next Tuesday…