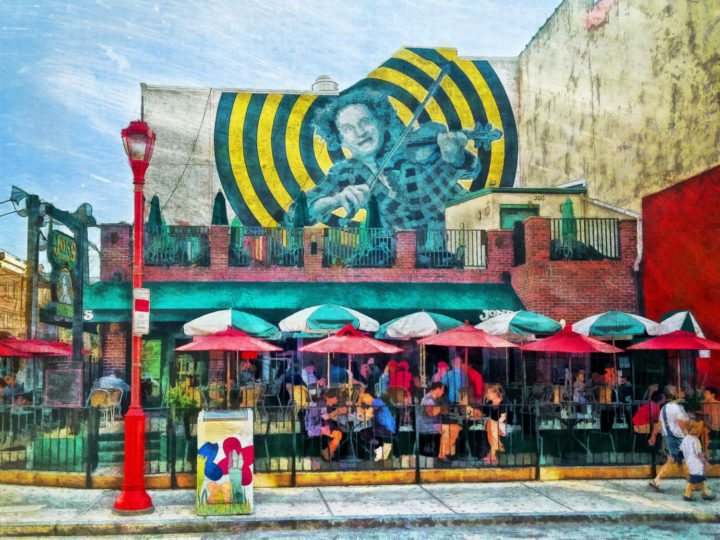 Last time I was going to tell you guys about my day trip to Philadelphia, and started in with the R.E.M. thing. And before I knew it… the whole update had been hijacked. Oh well. It happens sometimes. I’ll just do it today. Let’s get the whining out of the way first, though; I have a cold, and don’t feel all that great. I could sense it overtaking my entire life force yesterday, like some insidious demon from another realm. And now it’s fully in-place, with complete control of me. I’m like Will on Stranger Things at this point. Fantastic.

The trip to Philadelphia was fun, but nothing too outrageous happened. Other than paying $15 to leave my car in some filthy piss-sodden parking garage. $15! Yes, I know it would’ve been $35 in NYC, or whatever. But excusing stupid shit by pointing to other stupid shit just doesn’t cut it in my book. Pass the beer nuts.

Anyway, the boy and I walked around the South Street area for a few hours, and it was a good time. It was a little rainy, but not enough to cause any major problems. We had lunch at Jim’s Steaks, and it was excellent as usual. We went upstairs to that weird dining room, and had to stand along a wall to eat. The boy wasn’t happy about that, but it turned out OK.

I had a cheesesteak with Cheez Whiz and onions. The guy in front of me ordered his using the local lingo: “wit'” and all that stuff. Needless to say, I just said “Cheesesteak with whiz and onions.” I do not have the right to use the local lingo, and would feel like a complete fraud, as well as a douche, if I attempted such a gambit. The sandwich was GREAT, though. Possibly the best cheesesteak I’ve ever had. I’d been there before, but this one seemed especially good.

We spent a large amount of time in Repo Records, which was also fun. I bought this CD, which I didn’t even know was available. I’d never seen it, except on vinyl. But what do I know at this point? I’m like this guy.

And we logged at least 45 minutes inside Atomic City Comics. Neither of us know much about ’em, but the place is pretty insane, and we had a good time browsing around.

At some point I had to urinate with a fiery urgency, and there’s no place to go in a setting like that. Maybe a parking garage? I attempted to offload at Jim’s. But both unisex bathrooms were occupied, and nobody was coming out. So, I finally gave it up. Every other business had no public rest rooms or, if it was a restaurant, they required you to buy something. I finally went into a Starbucks and Frankenstein-walked to the men’s room. It had a keypad on the door. Grrr… So, I ordered a small coffee and asked for the code. 1939, she said, and I finally found sweet relief.

Afterward, I was sitting there drinking my unwanted coffee, and some swarthy asshole came in and demanded the code. He didn’t buy anything, he just hollered his demand. They eagerly gave it up, which felt like a ripoff. When he came out he bought nothing, and left. I didn’t care for that. He was not a customer, he was just some freeloader who bullied his way to illegitimate urination.

It was a good day. At least I think so. If the boy has a blog of his own, which I don’t know about, he might’ve written a completely different account of events. In fact, that’s probably a definite. For some reason I exasperate him.

By the way, it snowed last night. I mean, the roads are OK, but there’s actual snow everywhere. So, it’s started. The weather pump has been primed. At any point I can now find myself white-knuckling it home from work, my entire body rigid with anxiety. Good times.

Also, today is my ten-year anniversary at work. Can you believe it? It feels like maybe four years, and it’s been ten. It’s disturbing, my friends. Highly disturbing. Every year is now going by in a month, or something. I was at WEA for almost ten years, and Warner Home Video for seven. If you don’t combine them under the Time-Warner umbrella, my current job is the longest run of any I’ve had. That seems bizarre to me.

I have to go now. There’s some guy in our kitchen replacing our garbage disposal. He showed up two hours early, which bugs me. Two hours late would be worse, but early is bullshit too. I have to go yuck it up with this guy for a few minutes, and go to work. I feel like garbage, but the show must go on.

Please don’t forget to use our Amazon links while doing your holiday shopping. There’s one at the bottom of every update, and also in the sidebar. Just click through, and shop as normal. It’ll cost you nothing extra, and I’ll receive a small percentage of whatever you spend. It’s a simple and painless way to support The Surf Report!