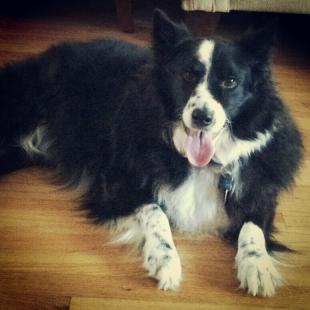 Sorry I’ve been away for so long. I was distracted. I could fill you in on the root of it all, but nobody would benefit from such an exercise. Everything’s been said a million times; we’d be breaking no new ground. So, let’s just get back into it, shall we?

We celebrated our dog Andy’s 12th birthday this past weekend. And by “celebrated,” I mean we said, “Happy birthday, Andy!” He was born in June 1, 2001. Our kids can’t really remember a time when he wasn’t around. The older boy vaguely recalls the day we brought him home, but they’ve both grown-up with good ol’ Black Lips Houlihan.

And in honor of Andy turning 12, here’s a brief State of the Dog report:

A few nights ago I let him out to sling urine, serve-up some yard crullers, or whatever was on his mind — and he was viciously attacked by a standard poodle. That ridiculous beast is owned by our next-door neighbors (not the Half-Shirts, the people on the other side), and it’s mean as hell. It looks poofter, but acts Mike Tyson.

The thing came tearing around the corner of the house, and was upon Andy like a lion on a zebra. WTF?! I had a full pint of Yuengling in one hand, and was trying to get between those two snarling and barking and snapping hounds… without spilling my beer. I kicked that tall-ass dog a couple of times, but it just kept coming. It was a high-stepper with murder in its heart.

Andy held his own for a few seconds, but quickly switched to retreat mode. That spindly bastard was deranged. I was about to throw my beer on it, when the son from next door came sprinting across the front yard and practically tackled the thing. I was just standing there, blinking real fast.

He wrangled it, and started dragging it by its collar back to their house. “Sorry,” he mumbled, and I didn’t answer. Andy was unhurt, but all whipped-up on adrenaline. He sat in the middle of our living room floor for 15 minutes, panting at an accelerated clip.

And last night I was dragging our trash cans to the curb, after work. This was at 2:30 in the morning, and I could hear that giant poodle inside the house next door completely losing its mind. It was barking like mad, and possibly throwing its body against a wall. Holy shit. That thing will probably kill me someday. And that would be just my luck… brought down by an abnormally tall poodle. I don’t care for any of it.

Of course, Andy is a little crazy too. Yesterday he wanted out, but the mail hadn’t come yet. So, I put him on a leash, and walked around the yard with him. I couldn’t risk the mailman arriving while Andy was running free. Black Lips HATES the mailman, and would probably go airborne on his ass.

He snorkled around the yard for a few minutes, read and sent some peemail, and finally humped-up like a kangaroo for the finale.

And as he was in mid-shit, the mailman came walking up. Unable to abort, Andy continued to dump, while barking and baring his teeth. He never abandoned his shit-stance, but still voiced his displeasure at the presence of the evil delivery person.

The mailman chuckled, and continued on down the block. And once Andy finished the task at hand, he started kicking like a bull, and sent a divot flying halfway to the street. “That’ll show him!” I said, and he strutted into the house, like George Jefferson. Clearly, he was pleased with himself.

Unfortunately, Andy is starting to show his age a bit. He’s not nearly as active as he used to be, and his teeth are starting to collapse. In a year they’ll be fully horizontal, if something isn’t done. He has buck teeth on the bottom now, and you can see a lot of them, even when his mouth is closed. I’ve started calling him Chief Fallen Tooth.

Because of his teef problem, we’ve had to switch to a moist dog food that comes in individual serving pouches. And man, he loves it. He’s constantly wanting another pouch. He keeps telling me, with his spoon-bending stare: “Pouch me! Pouch me again!!” He’s becoming a pouchaholic, and we might have to send him to the Frisky Ford Center.

But, according to this website, he’s only 69. My parents are older than that, and still kicking ass. So, we’ll hopefully have the pleasure of his company for a few more years. He’s a good friend.

And so, I’m pleased to announce… the State of the Dog is strong!

I’ll see you guys again next time. It probably won’t be tomorrow, but I’ll shoot for Saturday/Sunday. And I’ll get my shit back together next week, I promise.