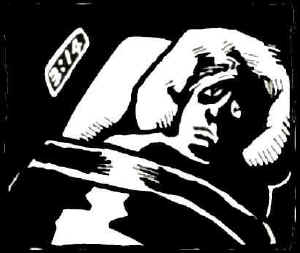 Last night at work I was listening to an old Jean Shepherd radio show from 1974, and there was a commercial for Newsday, a New York newspaper.  The announcer announced that Newsday would be serializing a new Rose Kennedy autobiography, in its entirety, daily for two weeks.

I like old commercials, but this one was kinda dull, and my mind started to drift.  Until the guy said, “And for the first time ever, Kennedy talks at length about her retarded daughter!”

Yesterday I woke up in some kind of deep, deep funk.  I finished the second draft of my “book” on Saturday, and was pretty excited.  In fact, Toney and I celebrated with an ill-advised number of adult beverages.  Saturday was good.

But I was depressed the next morning.  I’d be returning to work later in the day, to my pre-second-draft-in-the-can world, as if I’d spent the previous ten days hanging around on couches, watching Caddyshack or whatever.  And not hunched over a laptop for ten hours per day, tweaking and rewriting.

It was some kind of postpartum let-down, I think.  And Sunday was bad.

Of course I didn’t really think my life would instantly change the moment I was finished writing.  It was just a primal thing, way down deep.  There’s no instant pay-off to writing a “book,” and it sucked going back to what I’d left (all fired-up and enthusiastic) almost two weeks before.

But I feel a lot better today.  It was just a momentary downward spiral.  I’ve leveled-off, thank you very much.

It was a pretty intense experience, too.  I must’ve logged a hundred hours inside that library, and by Saturday I was fully sick of the place.  Also, during the middle of the week I couldn’t sleep very well.  I went to bed before 10 o’clock one night, exhausted.  And laid awake for hours, my mind racing and misfiring ‘n’ shit.

Eventually I turned off the alarm clock, left a note for Toney to call and wake me up at 9:30, and somewhere around 4 a.m., finally drifted off.  I was starting to lose my grip; it was mildly disturbing.

But I got it done, and I think the second draft is a lot better than the first one.  I fear there will have to be a third go-round, but we’ll see what happens.  I’ve got the manuscript out to some folks, and am looking forward to their feedback.  Hopefully all five will say, “It’s perfect!  Don’t change a thing!”  Heh.

And speaking of books, and postpartum depression…  The mailman just brought me a copy of Game Six, a book about the 1975 World Series.  It’s not very old, and I bought it for 19 cents.  It’s a hardcover, and looks like it came straight off the shelves of Barnes & Noble: perfect, unread condition.

How much you wanna bet the author agonized over that thing, just like I did last week?  And a few months after it’s published… 19 cents.

Yeah, I’m going to try not to think about any of that.

I hope you guys enjoyed the guest posts last week, by our lineup of once and future Surf Report columnists.  Just so you know, I also asked lakrfool, but got no response.  I might not have his most current email address.  Or he just ignored me.  I don’t know.

Anyway, thanks again to Metten, Brad, Buck, and the Angry White Guy.  Well-done, guys!  And much appreciated.

Last weekend the Evil Twin and I went back-and-forth for a couple of days, and eventually came up with a new shirt design.  You can see it here.  I wanted something simple, with the original fish, and light-colored for summer.  Once again, the Evil Twin didn’t disappoint.

I’m going to offer this shirt as a pre-order until June 18, and will cover those orders only.  I don’t expect to sell an enormous number of them, but have a feeling it’ll end up as a favorite, in the long run.  So, if you want one, now’s the time.  Place your pre-order here, and the T-Shirt Lady will make one just for you.

As for a Question of the Day… this one was triggered by our oldest hooligan, who told his brother a few days ago that a video game must surely suck, because it has a picture of a dragon on the front.  It reminded me of one of our original Rules of Thumb:  If the video box shows a beautiful woman pointing a gun, the movie is shit.

So, I’d like to know:  What is a sure sign that a DVD (or videogame, I guess) is going to suck?  What one clue in the artwork telegraphs it for you?  Use the comments link below.

And it feels great to be back!  Thanks for reading, and participating.