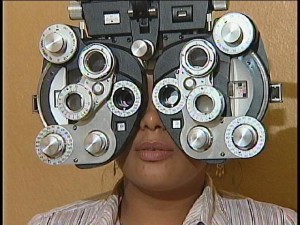 I have an appointment with the eye doctor today at 2:20.  Hopefully he can get me out of these glasses soon, because two people at work have already said I look “professorial.”  Can you imagine my horror?  Plus, the whole world is in soft focus, like a Hallmark sympathy card.  And I can’t have that.

There’s also a snow storm bearing down on us, and it’s supposed to be at the height of its shittiness between midnight and 5 am.  Considering that I’ll be driving home from work at 1:30 am… I see some white knuckles in my future.  And a vigorous Kegel workout.

I heard someone at work making the tired, old complaint about still writing the previous year on their checks.  “How long does it take until that stops?  A month?” she laughed.  And I thought, “Who in the hell still writes checks?  What is this, 1979?”

I think Toney is forced to write a few checks, to pay bills.  But we pay as much as possible, online.  And I use my bank card for everything.  Last night (for instance), in the cafeteria at work I bought a cup of soup and a Snapple, and paid with my bank card.  It cost less than three dollars, but I almost never have cash.

And I don’t even know where my checkbook is.  I haven’t used it in a year.  Do you still write checks for anything?  It feels like a throwback to a different era to me.  Like party lines and Tony Orlando.

Brad sent me something this morning that made me laugh: this pic.  Apparently Pyromania is going to be an authentic Def Leppard tribute band.  Unlike those poseurs in Love Bites.  Their drummer just tucks his arm inside his shirt, and pins up his sleeve.  But you can totally see it under there… so fake.

Yeah, I’m just talking out my ass; I have no idea if there’s a band called Love Bites.  But I can hear that comment being made, inside my head.  Ya know? And it’s hard to tell, but did the guy actually misspell Def Leppard on that flyer?  Wotta dotard.

Here’s some semi-related hilarity, from a few years back.

Back during a previous lifetime I was involved with a girl for many years, and we were engaged to be married.  It never happened, of course, which is a good thing for all parties involved.  But she used to ask me these really weird questions, and I was wondering if any of you have ever encountered such a thing.

Maybe once every six months, she’d launch into this thing where she’d come up with tragic scenarios, and ask if I’d still love her if they should ever come true.

What the hell, man??  I probably endured ten of those sessions, over a six year period.  And during the early days I’d always say, “Of course I would.”  But near the end I started asking for more information, before offering an answer.  Like, “Your whole face, or just part of it?  Would you be able to get away with wearing a Phantom of the Opera mask?”  Yeah, she didn’t much care for the follow-ups.

Have you ever gone through anything like this?  Or was my girlfriend just especially strange?  Have you ever had a significant other who liked to hit you with ridiculous hypotheticals?  Or any kind of ritualistic questioning?  Please tell us about it in the comments.

And I need to call it a day now, and get ready to put my chin on the tissue paper.