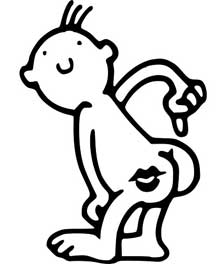 I’ve worked in offices most of my adult life, and have encountered, I believe, every species and sub-species of ass-kisser along the way.

Oh, there might be some exotic variation I don’t know about, perhaps in the former Soviet Union or Tennessee, but I’m fairly confident I’ve witnessed most of ’em, in all their disgusting glory.

After I got home last night I turned on Butch Walker, tapped a cylinder of the golden elixir, and tried to capture on paper the main categories I’d thought about during my late-night commute.

And here’s what I came up with…  Once I’m finished here, I’m going to rely on you guys to fill in the holes.  ‘Cause I have a nagging feeling I listed more inside my car, than what I remembered at home.  My brain doesn’t always play along.

In any case, let’s get started.

The Buddy This style of sucking-up requires the sphincter-spelunker to pretend he’s the boss’s buddy.  He jokes around and engages in gentle ribbing of the authority figure.

He also asks about the boss’s family members, using their first names.  He doesn’t say, “How’s your wife’s new hip?  Is this one a keeper?”  Instead, he says, “I hope Sarah’s recovery is going well?  Give her all my best!”

You know, as if “Sarah” knows this shitpouch from Adam, the bagboy at Kroger.  Or has any use for his best.

The Buddy might not be so irritating if he’d just let nature takes its course, and allow a genuine relationship to develop.  But he rushes things, acts like a blue-ribbon douche, and causes his co-workers to fantasize about him being roasted alive in a fast-moving house fire.

Golf One of the few sports men can engage in while wearing polo shirts and pressed slacks, golf allows the less-aggressive crack-snacker access to the boss’s inner-circle.

This is a perfect compromise for the would-be Buddy, who isn’t prepared to forfeit ALL his dignity.  At least not in one lump-sum.  They just pretend to be addicted to the game, and act like it has nothing to do with butt-burrowing.  Oh, nothing at all.

Office golfers are brown-nosers, make no mistake about it.  They just do it with a little more subtlety.  But that doesn’t change the fact that I’d like to kick all them full in the reproductive system.

The Chameleon This is the guy who takes on the interests of his boss.

I once worked with a large teardrop-shaped gentleman with a chronic skin condition.  For a couple of years, before a management shakeup, I only heard him talk about the Dodgers and Van Halen.

But when a new boss was installed, who was a big wine snob, this guy suddenly became an expert himself.  Overnight, it seemed, the dude became a real cork-sniffer.  And there was mass eye-rolling across the entire second-floor.

The Chameleon is among the most transparent of anal-analyzers, and for this reason deserves one beating after another.

The Gift Giver This is the Buddy or the Chameleon taken to the next level.  These are people who just happen to see things in stores that make them think of their boss, and decide to buy it for them.  It’s usually a book, or a CD, or something along those lines.

At the same office where ol’ Flaky Skin Wine Lover worked, there was another accomplished colon-captain who found out his new boss loved exotic chocolates.  So he started bringing him boxes of the stuff.

You know, because the dude had just happened upon it somewhere, all accident-like, and it reminded him of his new “friend.”

It’s funny, though.  He routinely stumbled across really weird chocolates, made with Scandinavian yak milk or whatever, almost on a monthly basis.  And I never saw that shit anywhere.  I mean, I’m out and about too, but never came across much radically bizarre candies.

Interesting, isn’t it?  In fact I’m skeptical, which is probably why I so often fantasized about him being killed in a freak runaway church bus accident.

The Snitch This is the person who, for ethical reasons only, tells the boss about all the shenanigans going on behind his back.

Due to high moral standards and a devotion to the company, he feels compelled to keep management apprised of the goings-on in the department.  It’s always a very difficult decision, you understand, but he just wouldn’t be able to live with himself if he kept quiet.

The Snitch also pulls the boss aside, from time to time, to point out how certain workers aren’t doing their fair share.  Because, you know, of those same ethical reasons.  Under normal circumstances, he wouldn’t say anything; it’s just that he cares so deeply about the success of the company, etc. etc.

This particular brand of rectum-romeo is the most loathsome of them all.  And if they found his crumpled body in the parking lot, it would be like an Agatha Christie novel:  every single person a suspect, including the boss who can’t stand the fucker either.

So who did I leave out? I know I had two or three more categories, while driving.  Oh, I was on a roll…  Use the comments to help me close out the category, won’t you?

Also, if you have any stories about specific ass-kissers (or whatever you want to call them), I’d like to read those as well.

And since we’re talking about work, I should probably remind you to draw a picture of your boss, and fax it to me.  I’m building a gallery! The number is 570-585-6856.  Or, if you prefer, just scan it and send it to jeff at TheWVSR dotcom.

Please also check out the two latest posts at Mockable.  I’m incredibly biased, but I think they’re extra-good.  I wrote one, and Metten wrote the other.  Don’t miss ’em.

I’ll update again late tomorrow, or early on Saturday.  I’m way off-track this week.  But it’s only a temporary situation, I assure you.

Have yourselves a great rest o’ the day.