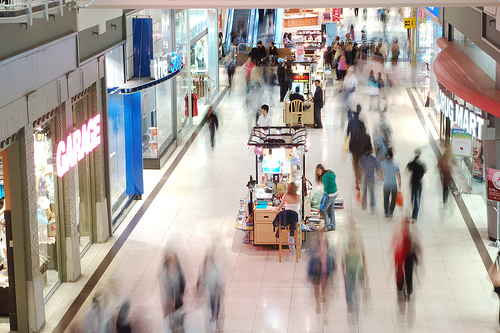 Over the weekend I decided I needed a fleece jacket.  I have a couple nice winter coats, but all my lighter ones have seen better days.  My favorite, a green pull-over rain jacket (or somesuch), is starting to fray around the edges.  And I can’t have that.

So, we started at Dick’s Sporting Goods, and I was shocked (shocked, I tell ya) by the prices.  A plain North Face fleece, nothing special beyond the logo, was eighty bucks.  Eighty!  And Columbia wasn’t too far behind.

I’m sorry, but that shit is out of the question.  What am I, the mayor of Douchetown?

I considered going to Target and just getting a no-name version.  Heck, it’s just a torso cozy, who cares about the brand?  But Toney convinced me otherwise, and said we should try the mall.

I hate the mall, but begrudgingly agreed.  And within minutes I’d found exactly what I was looking for.  It was Columbia, fifty-five percent off the original price, and an additional discount if we used our JCPenney credit card.

So I ended up getting a really nice jacket for less than thirty bucks.  Original price:  seventy(!).  And they had all the enormo-sizes, and everything.  Pretty cool.

I never consider the mall.  I have it in my head there are no deals to be found there, that the prices are jacked-up so retailers can pay enormous rent on their fancy-pants spaces.  Plus, as mentioned, I pretty much hate sprawling shopping complexes, and avoid them whenever possible.

I didn’t always feel this way.  When I was in my twenties, and earlier, I kinda liked spending time at the mall; an ex-girlfriend and I would often make it our evening destination.  And I remember enjoying it.

But something’s happened, either to me or the malls themselves, and I now have no interest whatsoever.  On rare occasions when I’m required to visit one, I become almost instantly fatigued by boredom, and shuffle around like a victim of elephantiasis.

There’s just nothing there for me now.

I remember hanging out in bookstores, but they’re all out in the parking lots at this point.  And I used to find great cut-out LPs at National Record Mart (including the first three Jam albums, and the original Nuggets).  But I don’t even bother visiting mall CD stores these days; the prices make me grimace like Gilbert Gottfried.

And in the early days of the Town Center Mall in Charleston, there was a store called Heaven.  They sold retro hipster t-shirts and knickknacks, and had extra-tall candy counters – so you’d feel like a kid standing in front of them.  And they stocked Zotz and Razzles, and all manner of stuff I’d almost forgotten about.

So, that was fun.  As was the food court.  My parents aren’t exactly the adventurous types, and I hadn’t been exposed to many unusual foods.  You know, like calzones, and tacos.  When the Town Center first opened, their fast food lineup seemed impossibly exotic.

Yes, and I tried them all, with the exception of the Greek place.  They had a big slab of shiny gray meat rotating on a giant skewer.  The guy (who always had his short sleeves rolled up) would slice off a few slivers, and wrap it up in what looked like a wash cloth.  No thank you.

I have no idea what kind of “meat” it was (lamb?), and suspected they just turned off the heat/rotation mechanism at closing time, then back on in the morning.  I had no proof of it, but was convinced their enormous quivering meat slab sat there for months on end.  Hell, for all I know, they’re still working on the same one, from opening day in 1983.

And there was a pet store, which we used as the world’s worst zoo (Look, a terrier!!), and a Dairy Queen, and a video game arcade, and several other interesting destinations.

But it’s all over now; I have almost literally no interest in what’s being served-up by those places.  I like books (no decent bookstores inside malls anymore), music (ha!), electronics (nothing, unless you count Radio Shack — and I don’t), and that’s about it.

I’d rather slam my face into an industrial fan than just wander around aimlessly looking at clothes.  I only care about cell phones one weekend every two years, don’t use cologne (call me a radical, but my goal is to smell like nothing), and have little interest in an all-natural apricot/milk buttock-mask.

The food courts don’t even do it for me anymore.  I guess I’m one jaded mofo, I don’t know.  But they’re all the same, it doesn’t matter what city (or country) you happen to be in.  Gristly and suspicious Chinese food (Look, a terrier!), a Subway with even higher prices, a place that offers-up expensive “stuffed pizza,” and all the regular fast food joints, only worse.

The one exception?  Chick-fil-A.  I still get excited by Chick-fil-A…

But who’s at fault here?  Me, or the malls?  And what’s your feeling on the subject?  Do you still make “the mall” an entertainment destination, like people seemed to do in olden times?  What do you get from them?  What’s the attraction?

At this point, the only mall I have a burning interest in visiting, is this one.  But it has more to do with mass zombie death, than the Pepperidge Farm kiosk.

So, there ya go.  Do with this topic what you will…

I’d also like to know how much you guys are paying for gas where you are.  I filled up a couple days ago, and paid $2.89 a gallon.  Five years ago I would’ve recoiled in horror at that price, but thought it was a freakin’ bargain on Tuesday.  What’s it like in yer neck of the woods?  Use the comments link below

And I usually don’t update on Fridays, but since I let every one of us down yesterday, I’ll be here.  I can’t promise quality, but I will promise words.  Tomorrow, I will post more words…