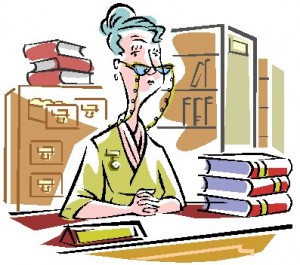 The local library holds a book sale twice a year, and I wandered into it last time, not expecting much.  I figured it would be hundreds of battered and musty hardbacks that hadn’t been checked-out since 1931, and mutilated volumes donated by bad-taste neighbors on a spring-cleaning jag.

But I was so very wrong.  I didn’t have a lot of time to explore, but found eight or ten must-haves almost instantly. Including several Bill Bryson travel books… They all looked brand new, as perfect as anything on the shelves of Barnes & Noble, and cost $1 each.

I was rushed that day, but made a vow to do better next time. You know, since it was so shockingly kick-ass.

And next time was this past Saturday – a day I was required to work many hours of overtime. Grrr…  I was going to miss it again. Why won’t the gods allow me to buy cut-rate books in bulk?! Is that so much to ask?

So I was bitching about it to Toney, and she told me she’d seen an ad somewhere that said “friends” of the library could shop on Friday evening, at some sort of VIP sneak preview, or whatever.

Friends of the library? The crap?  I called them up, and they said I could donate as little as $5 annually, and that would allow me to shop on Friday night, between 6 and 8. Just stop by the library, the woman said, make a donation, and I was in.

I’d do it!  I was supposed to get off work about 6 o’clock on Friday, and could probably be at the sale before 7. That would give me a full hour of treasure-hunting. Good stuff. If there’s one thing I like better than new books, it’s new books that cost almost nothing.

So I went to the library on Thursday, and the woman at the counter acted like I was wearing a necklace of turds. She asked, in an accusing tone, if I wanted to donate just so I could get into the book sale early.

“And you want to donate the minimum, I suppose?”

I was handed some forms to fill-out, and when I was almost finished, my new friend informed me it was so late in the game I probably wouldn’t be allowed entrance. It would be better, she said, if I just paid at the sale itself.

I didn’t fully trust her, I thought she was trying to sabotage my operation, but I was finally convinced, and left.

On Friday I tore-ass home, choked down some dinner, and arrived at the sale at 6:50. There was another woman guarding the door, and she was much friendlier than the previous one. I filled-out their forms, paid the $5, and was allowed inside.

And it was table after table of books, loosely arranged in sections, with a price of $1 each! Oh, what a beautiful sight.

Five or six of my fellow VIPs were already shopping, and seemed to be in the kind of frenzy I was preparing to surrender myself to.  Oh yeah. I knew I wanted to linger in the trade paperback section, because that’s where I’d hit the jackpot last time, so I did a quick tour of everything else first.

I looked at the fiction hard covers, the biography section, a few of the computer books for dotards, and eventually made my way to the main event.

And, as if on cue, one of the women behind the checkout counter hollered, “I’m sorry folks, it’s 7 o’clock. Closing time!”

Wha’?? I’d been told they were staying open until 8. Indeed, one of the other customers said he’d received an email from the library saying the hours were 6 to 8, and that’s what the newspaper ad said, as well.

“Well, I’m sorry. Those were mistakes.  We’re closing right now, so please bring your purchases to the counter,” the woman said, without offering even the slightest bit of wiggle-room.

I couldn’t believe it.  I hastily scanned my favorite section while the other guy checked-out, found a perfect copy of The Road by Cormac McCarthy, and that’s everything I left with.  They practically shooed us out of there with brooms.

“We’ll re-open tomorrow at 9 am!” the woman yelled at our backs, as we grumbled toward our cars.  Yeah, thanks for that.  Very helpful.

So, I ended up paying six dollars for one book.  Not horrible, I guess, but nothing like the act of literary gluttony I’d planned.

The entire exercise was nothing short of unsatisfactory.

On a more pleasant note, set yer DVR for October 21.  PBS will be showing the British documentary about Mark Everett (from the Eels), and his search for information about his eccentric, deceased father.

I saw it at an Eels show in Philadelphia, but the sound was really muffled and terrible.  So I’m looking forward to watching it again, for the very first time.  If you know what I mean.

Check it out, it’s really good.

I was browsing at the beer store a few days ago, and they had a single case of Fuller’s London Pride.  I think I drank more of those when I was in England, than anything else.  Well, with the possible exception of Boddington’s…

So, I was pretty excited to find it.  I’d previously bought a case of Fuller’s ESB from them, and it had been very tasty indeed.  And London Pride is even better.

But when I asked the cashier the price, he ruined everything.  45 dollars!  The ESB had been $36, and that had made my hands shake.  No way in hell I’m paying 45 bucks for a case of beer.

I’m sorry, but the tipping point has been reached.  I will not pay it.  I mean, what am I, a complete asshole?

And finally, in one of the older Secrets’ classes they’re preparing to bury a time capsule…  Students are supposed to bring in items they believe best illustrate the life and times of middle schoolers in 2008, and they’re going to bury it all on school grounds, with instructions for a future class to dig it up in fifty years.

Sounds pretty cool to me.  One kid, I’m told, brought in a container of that horrible Axe body spray, and the teacher vetoed it.  He was afraid it might explode, under extreme temperatures.

But it was a perfect choice, because most of those kids are doused in that crap, at all times.  Whenever the Secret has a few of his friends over, I practically have to go out in the yard to breathe.  I think they strap themselves into a harness, and have someone lower them into a holding tank of cheap, overpowering cologne.  Blecch.

Anyway, that’s my question today:  what would you put into a time capsule, to accurately illustrate your middle school/junior high years?  I’d have to go with a few baseball cards, a Cincinnati Reds cap, a copy of National Lampoon, and a Penthouse, waterlogged after being hidden inside a tree stump for three years.

What about you?  Use the comments link below, to help us build this most important historical document.