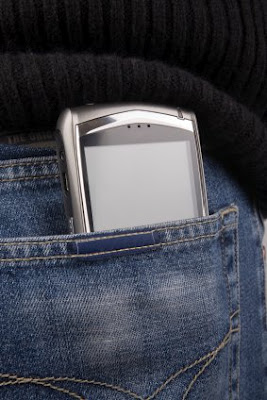 Yesterday afternoon I got out of the shower (sorry to put that image in your head), and noticed I had a missed call from area code 213 — which I know is in Southern California — and a voicemail. Interesting, I thought.

I listened to the message, and it was just a couple of guys talking in a car. It was muffled, and I couldn’t make out most of the words. The radio was playing, some kind of all-talk format, and these guys were just chit-chatting and driving along. Clearly, it was a butt-dial.

Curious, I kept listening until the pair arrived somewhere, and began talking with a loud-voiced, over-caffeinated woman. I hit the END button, and tended to the task at hand: Toaster Strudel prep.

But who the hell could it have been? They had my number in their phone, I presumed. And after I polished off my tasty treat (with the enthusiastic help of Black Lips Houlihan), I plugged the phone number into Google. The first page of results didn’t look promising, but on the second page I found a resume, and the mystery was solved.

It was a guy I used to work with — kinda sorta. And he’s one of the biggest assholes I’ve ever met in my life. Yeah, I know, assholes are hardly an endangered species, but this guy was the gold standard. If they ever construct a Mount Rushmore of Miserable Pricks, his pinched face will certainly be represented.

Grrr… Just the thought of him made my blood pressure spike. I’d blocked him from my memory for years, and now here he was again, insinuating himself into my life. Doesn’t he ever clean up his contact list?! I haven’t spoken to that bastard since early 2007.

I emailed one of my old co-workers and told him the story. He wrote back: “Holy crap!! That’s hilarious!! Who the heck butt dials anymore. Really??!! Obviously on top of his game as usual.”

And last night while I was at work his ass called me again. He left another marathon message, and I listened to the first couple of minutes. He was speaking baby-talk to a yappin’ dog. He routinely made women cry inside their cubicles, and probably a few men as well, but he was loving the hell out of that little mop dog. And so it goes…

I need to call it a day now, so I’ll turn it over to you guys. Do you have any history with butt-dialing, or text messages that went to the wrong person, or any similar electronic disasters? If so, please tell us your story. Use the comments link below.