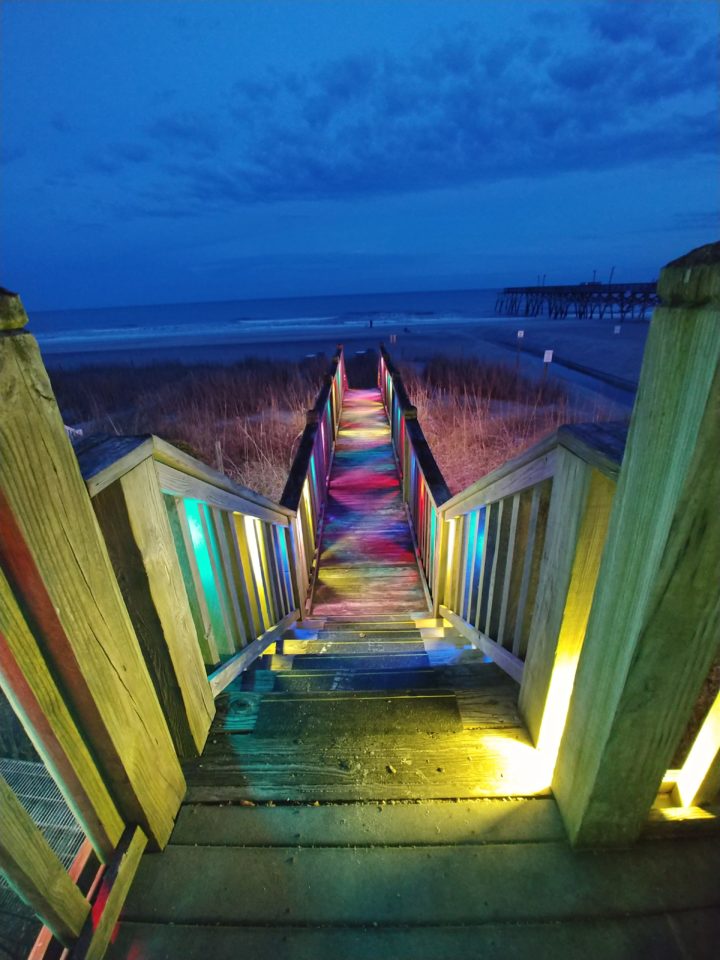 As I was leaving my job for our big Myrtle Beach extravaganza somebody warned me not to get sunburned. And I responded, “Oh, that’s not what this is about. It’s all about eating and drinking near water.” And somehow I crystalized the theme of the trip quite well, in a semi-smartass off-hand remark. So, in this one, I’m going to give you a quick recap of the eatin’ and drinkin’ that took place during our trip. I’ll break it down for you, day by day.

And in the podcast, I tell you about some mistakes we made while planning the excursion. Some fairly major mistakes… It’s now called The West Virginia Surf Report podcast, and episode one can be heard right here, or wherever you get podcasts. Please check it out. I think it’s a fun episode. Here’s the summary:

Our big Myrtle Beach trip has now come and gone, sadly. In this one, I tell you about the tactical errors we made while planning the extravaganza, and the resulting consequences. You live and learn, they say. But at this point shouldn’t we already have learned? It feels like we should’ve. Maybe we’re stupid? Hey, anything’s possible. But mistakes were made, my friends. The trip wasn’t a complete bust, but there were issues. And I break it all down for you in this first episode of the new West Virginia Surf Report podcast. It all leads to a surprise ending that I could’ve never predicted. Never! I hope you enjoy it. Thanks for listening!

Now let’s get to the food and drink!

We arrived in the early evening and, after securing a rental car, went straight to the funky retro motel. Seemed OK, I guess. We were still alive with excitement and willing to dole out many benefits of many doubts. Once we were settled, we drove to Walmart to get supplies for the room. Meaning beer and chips, etc. Last time we were there they had a small but reasonable craft beer section, but it now seems to be taken over almost completely by swill. Close your windows at night, ’cause the swill is creeping! But we were able to procure a 15-pack of Founders All Day IPA. Not exactly exotic, but it’s good.

Then we went to dinner at River City Cafe. They have a couple of locations, I believe, but we were at Surfside Beach. We sat outside, and it’s where I took the photo above. Pretty cool, huh? River City is a burger joint, with all sorts of exotic offerings. But I just went with a bacon cheeseburger, and it was completely fantastic. I don’t know if it was because I was hungry, or what. But it was one of the best burgers in recent memory. The fries were also near-perfect. It was semi-cold out there, but other than that… a 100% home run.

Beverage selection for dinner: Sweetwater IPA. It was OK.

We went to lunch at a place called Taco Mundo and it was mildly frustrating. The setting was beautiful, overlooking water (which is the theme) and expansive. But the food was inconsistent. We ordered an appetizer trio, which was chips and pico de gallo, queso, and guacamole. The queso was excellent, but the pico was bland as all hell. Toney liked the guac. I don’t eat that garlic mess, but she gave it a good review. But wot up with the pico de gallo?? Not good.

Then we had a special that included two “premium” tacos of our choice, and some sides. I played it safe and went with grilled chicken and taco americano. And again… the chicken was fantastic but the americano was bland. It’s weird. Some of it was great, and some of it was boring. The sides were also unexciting. So… I don’t know what to say. The stuff that was good was REALLY good. But not all of it fell into that category.

No beer at lunch. Too early in the day to flip that switch.

For dinner, we did a return visit to Tupelo Honey. We went there last year too and found it to be overpriced, but good. And since there were only two of us this time, we thought we’d go back. And we’ll probably never return. I think we’re done. I just couldn’t pull the trigger on any of their regular entrees, because of the prices. So I went with the burger special, and it came with nothing extra. “How much for a side o’ fries?” I asked. Five dollars, she said. What?! The burger was fine but not as good as River City Cafe. So, what’s the point? Also, there’s a weird vibe in there that I can’t put my finger on. As I said, I believe we’re done.

Beverage selection for dinner: New South IPA. It didn’t blow me away.

Cracker Barrel for a late breakfast! It was pouring rain that day, so we were hangin’ near the mall. The Barrel is always a good choice, I don’t care what anybody says. So, two greasy thumbs up from me. I went with the Old Timers’ Breakfast and ate it all, including the grits.

And to keep the lowbrow theme going, Toney begrudgingly agreed to indulge my request to have dinner at a place I used to love as a kid: K&W Cafeteria. We used to go there on family vacations, back during the 1970s, and I was a big fan. I was somewhat surprised to see it was still in existence and apparently popular. Toney thought it was a buffet, like Old Country or Golden Corral. But I assured her it was an old fashioned cafeteria where you go down the line and point out the stuff you want. Then they hand it to you, over the glass. So, she went along with my nostalgic endeavor. I told her I was going to attempt to recreate my go-to meal circa 1978. I did, and it cost something like $18. Just for me. Shit! But it was reasonably good. Nothing spectacular, but you can tell everything’s made fresh. It was fun, no regrets. Toney wasn’t blown away but didn’t hate it.

After dinner, we went to Publix and bought an additional 6-pack for the room: Westbrook IPA. I don’t think we drank it until the following night, but it was excellent. 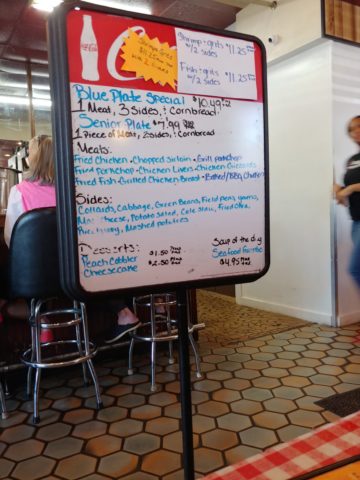 For lunch, we went to a place called Big Mike’s Soul Food. It’s in a fairly nondescript cinderblock building, and even though it was before noon… it was already crowded. We were seated and the waitress asked if we’d ever been there before. After we said no, she just walked away. Said nothing, just turned and left. What the? But a couple of minutes later she returned, dragging this big ass sign. “Here’s how it works,” she said and left again.

I was about to order fried chicken as my “meat,” but panicked at the last second and changed it to grilled chicken breast. A tactical error, I believe. It was good, but nothing special. But the sides were kickass. I went with collards, boiled cabbage, and macaroni and cheese. All were great. And the chicken was good but tasted like something I could do on our deck grill. I blame myself… Toney went with the fried fish, and it was nothing but raves from her. She freaking loved it.

Afterward we each ordered the peach cobbler, and it was also incredible. By that point, there was a gang of people waiting for tables, and they were eyeing us, telling us to get the fuck out with their eyes. In any case, Big Mike’s is highly recommended. Excellent.

Dinner was at Nacho Hippo, a hip and funky “Mexican” place. I believe it’s run by the same people who own River City Cafe. Everything was really good but super-Americanized. I don’t have a problem with that, but I’m sure others might. I ordered some kind o’ giant nacho plate for dinner, and it hit the spot. Everything was fresh and good, and the atmosphere was fun. Their beer selection was not good, and we both went with another New South IPA. That was mildly disappointing. But I’d return to Nacho Hippo without hesitation. It was fun.

Lunch at Sea Captain’s House. It’s a famous and fairly expensive seafood place, right on the ocean. I’m not big on seafood, but Toney likes it. I ordered a flounder sandwich, and it was good. It tasted super-fresh and the tartar sauce was unusual and tasty. They served it with hushpuppies that were, possibly, the best I’ve ever eaten. I believe this place has been there since 1962 and draws huge crowds. Indeed, by the time we finished our lunches, it was trending toward pandemonium in there. Our table was only a few yards from the Atlantic Ocean, and it was definitely a memorable and enjoyable meal. A little pricy, but not that bad. I have a feeling the dinner prices would make me sweat, though.

Dinner was our only repeat: River City Cafe. For some reason, I didn’t like it as much the second time. It was fine, but the first time was GREAT. We had another Sweetwater IPA with our burgers.

Then we returned to Publix for another 6-pack for the room: Wicked Weed Lieutenant Dank IPA. Good, but somewhat odd.

And I’m going to leave it there, ’cause something crazy happened on Friday. You can find out in the podcast. See how this is going to work now…? The podcast and the website are going to be intertwined. Maybe. Sorta.

Anyway, I hope you enjoyed this recap of the main theme of our trip.

I’ll see you guys again on Thursday, with more Myrtle Beach ridiculousness. Oh, there are stories to tell.