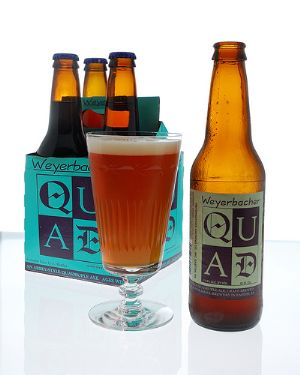 On Friday evening I attended the one-year anniversary party for WILK radio’s Friday BeerBuzz program.  It was a lot of fun, and I had exactly one too many.  I wasn’t smashed or anything, but I probably should’ve resisted that final pint.  I’m a paranoid sumbitch, in my old age.

But everything worked out OK.  I’m happy to report that I didn’t end up in a federal pound-me-in-the-ass prison…

The party was held at an odd deli/beer store/picnic area.  It’s hard to describe.  They have (according to the sign) 1100 different beers in stock.  I didn’t count them, but they certainly offer a huge selection, including some stuff I’d never seen before.  And I know a little bit about fancy-pants beers.

They serve sandwiches in the place, and have round restaurant tables in the front section.  But in the rear of the store there are a bunch of picnic tables set-up, in the middle of the massive beer selection, and they sell pints of drafts there.  It’s like a beer garden inside a convenience store.  Very strange.

Seated around the tables were fans of the radio show (presumably), and everybody was drinking like they were entered into some kind of contest.

Weyerbacher had reps on-hand, and were serving up samples of their brews.  Tasty.  I was familiar with some of them, but a few were new to me.  All were interesting and good.  The last one I tried, something called Quad, was high-octane.  Wow!  If I’d purchased a full pint (something I considered for roughly one second), I probably would’ve gone full-Otis.

While enjoying my one-too-many beers, I talked with Surf Reporter Joe T., who couldn’t be a nicer guy.  And I spoke with Webster and Nancy, the hosts of the morning show, as well as Bil, the host of the BeerBuzz segment and proprietor of MyBeerBuzz.com.  I also shared some of my semi-drunken wisdom with Bosco (sp?), the producer of the morning show.  Everybody was really friendly, and I had a great time.

At one point we were standing there (in this weird convenience store with draft beer), and an older woman walked up to us.

“Are you Joe Thomas?” she asked.  Then:  “And you’re Bosco?”  Finally, she looked at me, and said, “Who are you?”  I told her my name, and she said, “Oh, I don’t know who that is.”  And she turned her back on me, and started talking to the other two.  Damn!  Good thing my self-esteem was already burned to the ground by eighth grade.

And the next thing I know…  Joe has a Flip camera out, and is trying to get the (possibly tipsy) woman to kiss Bosco on the lips.  And she did it.  I think everything started spiraling out of control shortly after they tapped that keg of Weyerbacher Quad…

I spoke with a couple of people about a super-limited edition Sam Adams beer, called Utopia.  It supposedly costs $125 per bottle, and one person said it tastes like soy sauce.  Supposedly it’s 20% alcohol, and can’t be sold in Pennsylvania.  I’m unclear on the details, but I believe I’ll pass, regardless.

And I vaguely recall someone claiming to have tasted over 10,000 different beers.  Can that possibly be true?

Near the end I noticed people coming out of the cooler, with pints of something interesting-looking.  I mean, from behind the Budweiser and Coors, and all the other mass-market stuff.  I asked an employee of the store about it, and he said they were hand-pumping a beer by Breaker Brewing in there.  What the?  Did you need to know a secret password to get one of those babies?

And that turned out to be a bridge too far…  I HAD to have one of those secret beers, available only to the rich and well-connected.  And it was excellent, but when I reached the bottom of the glass I had cartoon blue jays flying around my head.  I needed to get out of that place before I entered “the zone,” at which point all bets are off.

Joe asked if I’d sign his copy of Crossroads Road before I left, and I have no idea what I wrote in it.  Or if I signed my own name.  I went to a Burger King, had a Whopper with cheese (no pickles), and decompressed for a while.  I felt a lot better after ingesting that cannonball of fat, and drove home with my eyes darting around, and my hands welded to the steering wheel in the ten and two o’clock positions.

I’m getting old and paranoid.  The 1988 me would almost certainly shake his head in disgust if he could see me fretting and worrying in 2011.  Oh well.

And by the way… Toney and I went to the Banshee Pub in Scranton on Saturday afternoon, and had several additional kickass microbrews.  I had Yards IPA and Founders Centennial IPA.  Both were fantastic, and I was careful to keep my shit in check, so as to avoid another white knuckle ride home.

What did you do over the weekend?  Was it completely dominated by beer, like mine?  Please tell us about it in the comments.