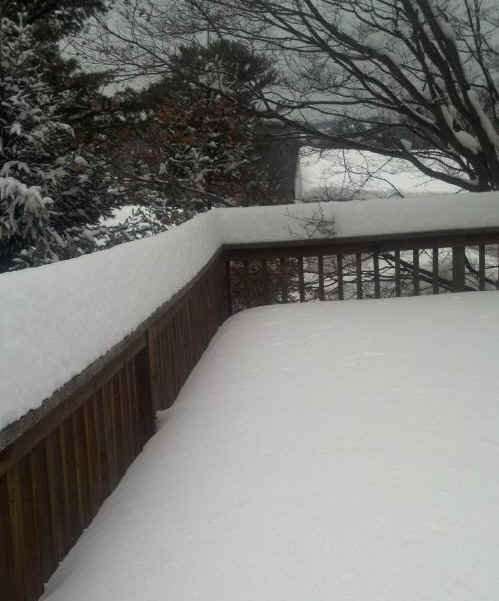 After being hammered by snow on Thursday, another six inches fell on Friday. We’re so beaten-down by now, it felt like nothing. But I had to go out there and shovel again, before I left for work. And I’ve about had it with that crap. Our driveway is almost like a tunnel at this point; both sides are taller than our cars. There’s almost no place to throw the snow.

Yes, the profanity was coming quickly and in unusual combinations.

The photo above is our deck, taken yesterday afternoon. You can see the substantial size o’ the snowpack. But Toney cleaned it off, and transferred everything to the yard. I’m glad she did it while I was working — and I didn’t know about it — because I would’ve been a nervous wreck. It’s a wonder the whole goddamn thing didn’t fall off the house, and take her with it.

This winter is outrageous. It’s like the apocalyptic winters of my youth, which I’ve undoubtedly exaggerated in my mind. But this is the real thing, and it’s not my dad shoveling and driving in it… it’s me. Wotta rip-off.

Andy (aka Blacklips Houlihan, aka The Snout of Truth) is having trouble with it, too. He looks like a porpoise at Sea World, moving across the yard. He disappears for a second, reappears a foot away, disappears again, etc. He’s using the dainty rear-chassis-drop method for peeing, and that seems to serve him well. But the shitting is a BIG production.

It takes him a long time to find the proper spot, which annoys me to no end. I can’t figure out the criteria he’s using to make the determination. “Just do it!” I scream, like a coked-up Nike executive in a whorehouse (or whatever).

When he finally divines the proper spot, he begins rotating with his head beneath the snow. Round and round he goes, until he’s created a crop circle roughly four-feet across. Then he walks out into the middle of it… and takes a triumphant dump. And after he finishes, he Sea Worlds it back to the house with a smile on his face.

I apologize for writing so much about the weather. I mean, seriously… But it’s been dominating our lives over the past few weeks. It’s just one storm after another. And when it’s not snowing, it’s 1 degree outside. Sheesh.

So, let’s turn this one into an update about outdoor shitting, instead… You know, like Andy does it.

Sometimes, after a few beers, I might take a leak out of doors. Especially if it’s past midnight during the summer, and I’m waiting for the hound to serve up his final yard cruller of the day. But I can’t remember ever crapping outside. It’s probably happened, but I’m getting no results with my mental Google search.

What about you? Got anything on this one? How about novelty urination? I once peed on a guy’s clean and folded laundry. Heh. It was a simpler time.

If you have anything on these important subjects — outdoor pooping and stunt pissing — please share them in the comments section below.

And I’m going to go find something to eat now. Good god, it’s been almost two hours since my last feeding. I cannot be expected to continue under these conditions!

See you again soon, my friends.