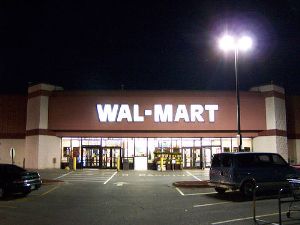 Last night I stopped at Wal-Mart on my way home from work, to buy contact lens solution.

And before I get into all that… am I the only person in the world who ALWAYS wants to spell “lens” as “lense”?  What’s the story with that?  I’m a very good speller, but there are a few random words that refuse to fall into line for me.  Every single time… I type it as lense, and get the red squiggly line of dumbassery.  Do you have anything like that?  Just some simple word that always gives you spelling trouble?  Please tell us about it.

For the past two days I’d been using tap water as makeshift contact solution, and experience tells me that two days is the limit.  After that, I start having problems.  My eyeballs ache, and I’m prone to sudden stabbing pains that leave me with tears streaming down my face.  It sometimes appears to my co-workers that I’ve just started crying, for no apparent reason.  And that kind of thing can hurt a person…

So, I went to Wally World at 2:15 a.m., on my way home this morning, and it’s a very interesting place in the middle of the night.

They’re always working on the floors, for one thing.  Every time I’m there late at night, they’re waxing some section of the floor.  Is it like painting the Golden Gate Bridge — just a continuous never-ending process?  I suspect it is.  I think they have full-time waxers.

Last night I was forced to take a radical detour through the women’s underwear section to get to the lens juice.  And this ain’t Victoria’s Secret…  I’m always amazed at the gigantic bras there, with steel safety cage, etc.  The straps are as wide as a seatbelt, and each cup could accommodate a full bushel of corn.

When I finally emerged in the toiletries section, I saw a morbidly obese woman piled-up on a motorized chair, with a young girl walking alongside her quivering girth.  The motor was laboring greatly, and I sneered to myself:  “Wotta selfish, irresponsible hog.  That girl is only five or six years old, and should be in bed.  It’s almost 2:30 in the morning!”

Was that too harsh?  (Not that I feel any differently today.)  What’s your reading of that situation?

I found the eye stuff, and picked up the appropriate solution.  Then I decided to go ahead and buy other stuff I’ll eventually need, since I was already there.  I hate to run out of toothpaste, or whatever.  It’s a giant pain in the ass to have to make a special trip to the store for something like that.  So, I try to keep one step ahead of it.

I walked down the deodorant aisle, and it looked like a crime scene.  Or maybe the mob received a tip that a stolen bag of heroin “revenues” was hidden amongst the Speed Stick?  It was a total war zone.

I nearly rolled my ankle on a cap that had been separated from some Sure, or whatever.  What the hell, man?  I had a feeling that when that capless thing was found, there would be a big black hair stuck to it.  Blecch.

I gathered up all the stuff I wanted, and started making my way toward the cash register.  And I saw Big Mama repeatedly ram a blood pressure machine with her battery-powered cart.  She was irritated because she’d been forced off the main drag by the waxing crew, and was having some kind of jiggly-necked hissy fit.

The little girl was standing back a few steps, acting like this was just standard operating procedure.  And I just went around them with no expression on my face.

At the register there was a teenage girl with lots and lots of rips in her jeans and a red stripe in her hair, buying a bag of beef jerky.

When it was finally my turn, the cashier had a terrifying coughing fit, and for a few seconds I thought she was going to go down.  But she regained her composure, wiped her mouth with the back of her hand, and rang up my stuff.

Man, I love giant stores in the middle of the night.  Do you ever shop while the rest of the world sleeps?  Any good tales to tell?  Please share.

And here’s a video of two British hipsters supposedly visiting a Wal-Mart for the first time.  It’s kind of funny, despite the high smugness-factor.  It’s worth a look, and fairly short.