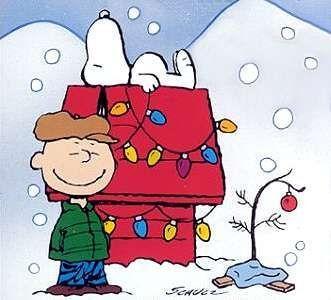 Here at Surf Report World Headquarters there are seven DVDs that must be enjoyed every Christmas season, lest we run the risk of tearing a hole in the time/space continuum.  Or whatever.

Five we watch as a family, one Toney and I enjoy together, and the last I do solo.  And here they are, The Essentials:

A Charlie Brown Christmas I’ve been watching this all my life, literally, and there’s something very calming and reassuring about it.  Compared to current shows on Nickelodeon and Cartoon Network, it feels exceedingly gentle and quiet.  Almost like those Nick Jr. programs produced in Canada, featuring bears wearing vests.

However, there’s a deceptive edge to it.  Many of the kids, you’ll notice, have a mean streak.  They’re not very nice to one another, and are shockingly cruel to Charlie Brown in particular.  That poor round-faced bastard gets shit upon, time and again.

The story is good, the tone is unusual and perfect, and the music is great.  If I’m having trouble getting into the Christmas spirit, I pour myself a couple fingers of Makers Mark, and put on this DVD.  A short time later: mood officially adjusted.

Rudolph the Red-Nosed Reindeer More Christmas comfort food from my childhood…  This is the best of the slightly-freaky Rankin-Bass claymation holiday productions, and an annual must-watch.

The first half of the show is better than the second.  I like the scene with the exasperated gym teacher-like flying instructor, who has no regard whatsoever for the state of Rudolph’s self-esteem.  And then there’s Hermie(?!), the slightly effeminate elf who under-performs at Santa’s toy-making sweatshop, because he secretly longs to be a dentist.  WTF?

Also, you’ve gotta love the grandfatherly and obese snowman, voiced by Burl Ives, who glides around and sings iconic Christmas songs throughout.

When Rudolph and Hermie go on their road trip of self-discovery, I lose interest somewhat.  But it’s still kinda fun, especially when they encounter the Abominable Snowman, who is also slightly effeminate.

Similar to Charlie Brown, Rudolph is treated like crap by his peers.  Until, of course, they figure out a way to exploit him for self-gain.

A Christmas Story I was one of seven or eight people who actually saw this movie as a new release, in a theater.  I remember checking it out because Siskel & Ebert praised it from the balcony.

But it didn’t become a proper holiday classic until years later, after it was released on video and Ted Turner started playing it into the ground on TBS.

And a classic it is.

Co-written and narrated by the late, great Jean Shepherd, it features one unforgettable segment after another.  Flick’s tongue stuck to a metal pole, Ralphie a-cussin’ and a-sluggin’ the evil bully Scut Farkus, the leg lamp, the Red Ryder BB gun, the freaky department store Santa…

I’ve since become a fan of Shepherd’s old radio show, and heard him tell many of the stories that ended up in the movie, on recordings that date as far back as the early 1960s.  For years he urged his listeners to cover New York City with graffiti that read, “FLICK LIVES!”

A Christmas Story will end up being Jean Shepherd’s legacy, proof that he actually walked around on Earth for a while.  And unlike, say, Randy Newman’s “Short People,” it’s not such a bad deal.

‘Cause it’s a great movie, and an enduring holiday classic.

National Lampoon’s Christmas Vacation For years I resisted this one, because it’s Sunshine’s favorite.  Do you ever do that?  Force yourself not to like something, for fear of being lumped-in with a person you don’t want to be lumped-in with?

I do.  But over the past couple of years we’ve bitten the towel, and watched Christmas Vacation, anyway.  And I consider it an error corrected.

It’s big goofy fun, with plenty of memorable moments.  I like the scene in which Chevy/Clark is trying to read a magazine in bed, with Christmas tree sap all over his hands.  And his expressions while eating the emaciated over-cooked turkey make me laugh every time.

And then there’s Cousin Eddie…

Christmas Vacation is not a great movie, but it’s a good time.  And what’s wrong with that?  Nothing, I say.

Due to a decade-long Sunshine-fueled boycott, this is a relatively new addition to The Essentials list.  And it gets better with every viewing.

Elf This one doesn’t get much love, for some reason.  I think it has a lot to do with Will Ferrell’s portrayal of the man-child lead character.  I can see how it might be irritating to some folks…

Not me, however.  I find the whole thing hilarious.  In fact, I think he should’ve won an Academy Award for the role.  Let me check Google for who actually took it in 2003…  Sean Penn in Mystic River?!  Please.  Didn’t he just sit on a porch and cry during that film?  Elf kicks that turd’s ass.

Anyway, the whole family watches it every year, and has a great time with it.  You can file a lawsuit if you’d like…  I find it to be genuinely clever, and funny.  It reminds me of one of my other favorites, Cabin Boy.  Which doesn’t get much love, either.

A few years ago my parents visited at Christmastime, and the boys talked them into watching Elf.  When it was over both my Mom and Dad had looks of utter confusion on their faces.  And my mother said, “How in the world did someone even think-up such a thing?”

Black Christmas This is the one I watch by myself, because it’s an R-rated horror film, and Toney has no interest.

I first saw it during the early days of HBO, under the title Stranger in the House.  And it frightened me so bad there might’ve been some light spotting.  For years I considered it to be the scariest movie I’d ever seen.

It takes place in a sorority house, a few days before Christmas.  The girls start receiving bizarre (and I mean bizarre) phone calls from someone unknown, then begin disappearing, one by one.

The movie corresponds to standard slasher-film formulas, but was made years before Friday the 13th, etc., and is much, much better.

I have a DVD copy squirreled away, and break it out every December.  And while it’s not quite as scary as it seemed in 1976, it still makes me pull the blankets up a little higher in bed.

Someone did a remake a couple years ago, but I haven’t seen it.  I hear it sucks, and have no interest in bringing bad vibes to the Black Christmas experience, thank you very much.

The Homecoming Some folks accuse me of being ironic when I sing the praises of this film.  But that simply ain’t the case.  It’s my favorite Christmas DVD by far, and I couldn’t be more sincere.

The movie takes place during the Great Depression, way out in rural Virginia somewhere, on a plot of land known as Walton’s Mountain.  A big family lives there: the parents, the grandparents, and a metric shitload of children.

The father is working out of town, and is due back for Christmas.  But he’s running late, and a radio news report of an overturned bus — with fatalities — has everyone on edge.

The film works on many levels.  It’s not only a better-than-average made-for-TV movie (the basis for The Waltons series), with a feel-good ending that never fails to put a lump in my cynical throat.  But it’s also filled with some of the best lines of dialogue in cinematic history.

In fact, I don’t think a week has gone by, in a couple of decades, when something hasn’t caused me to crank off a quote from The Homecoming.  Just ask my long-suffering wife…

Patricia Neal’s portrayal of the (slightly crazy?) mother is classic, and the almost-psychedelic scene in which John-Boy is driving Charlie Snead’s car to find his father, is mind-blowing.

Every scene is memorable, almost every line a keeper.  I’ve probably seen it thirty times by now, and shout dialogue at the screen, like a nerd at The Rocky Horror Picture Show.

The Homecoming is a cult classic, without a proper cult.  For years it was impossible to find, and I thought about buying a fire safe for my prized VHS copy.  But now it’s readily available on DVD, and I have two copies.

You know, just in case.

So, where did I go wrong?  What did I leave off the list?  What are your Essentials?  Set me straight in the comments.

And this was originally going to be a Suggestaholic post, but it turned out to be a lot longer than planned.  So I’m posting it here.  What of it?

Before I go, here’s something worth revisiting.  You know, since we’re talking holiday cheer…