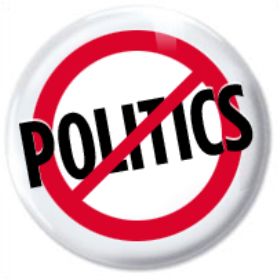 Now that we’re in another political season (already), I’m looking forward to hearing about the people the candidates have met while out campaigning.

“I was in a diner last week, Sherry’s Diner, in Raw Sewage, Arkansas, when a mother of Siamese twin war veterans approached me in tears…”

I love when they tell us about these conversations, and it’s even better when they bring the people onstage with them, like Carrot Top and his trunk of “funny.”  Someday, if I’m lucky, I’ll also be able to play the part of fully-exploited political prop.  Look at this man!  No, look!  Don’t turn away!!

And it’s fun to watch the candidates drip-feed their talking points to the media, then hear people at work or the grocery store, or whatever, repeating them — as if they’re saying something really original and profound.

Years ago I had a forum attached to this website, and people would go there and start political flame wars all the time.  They repeated the same buzzwords and well-rehearsed arguments, over and over again.  I got tired of it, so I went in and set up a bunch of rules that would cause the forum to automatically change certain phrases, to new phrases that I chose.

There were a bunch of them, but the one that worked the best was “Halliburton.”  Whenever someone typed that word and posted it, “I have a tiny penis” would appear in its place.  Comedy ensued.  I kept adding these kinds of rules, until it was almost impossible to maintain a political argument there.  So much fun…

But I’m going to make a pledge to you now:  there will be no political commentary at TheWVSR in 2012.  Not by me, anyway.  It’s not that I don’t think it’s important, or that I’m uninformed (you might be surprised).  It’s just that the world is already lousy with armchair political scientists, and I can’t see the need for another one.

If you desire a political blog, it’s certainly not hard to find…  But the West Virginia Surf Report will serve as a sanctuary during this election year.  When it all starts to weigh you down, you can come here and join a conversation about vomiting, Elvis Costello, fast food, juvenile delinquency, House Hunters, fat people falling off toilets, etc.

And so, I hereby proclaim this website a Politics-Free Zone.  At least through the election…  I don’t want to be in the business of censoring anyone, but please also try to hold back on the political snark in the comments.  I’d rather not install a rule that turns “Obamacare” into “I sniff the buttholes day and night,” and that sort of thing.  But I will, if necessary.

Thank you for your attention to this important matter.  And pass the beer nuts.

This past week was tough on me at work.  I struggled to make it through four days, after recently sailing through eleven with little trouble.  I COULDN’T WAIT for the weekend, and today it finally arrived.  Ahhh… sweet relief.

But I was sitting in Moe’s a little while ago, polishing off a cannonball of chicken and rice, when my phone rang.  It was my boss’s boss, and she asked if I was available for a special project on Friday and Saturday.  So, there you go…  My Loverboy dreams are dashed, once again.

Yeah, I know.  I could’ve said no, but that’s not the way I roll.  Plus, we can always use the extra money.  I’m trying to write a book and keep getting knocked off course, which is frustrating.  But whatever.  The Bat Phone rang, so I need to do my duty and serve Gotham.  Or something.

Speaking of work, someone brought in a giant bucket of Atomic Fireballs last night, and put it in the middle of our department.  There was a sign taped to it that said, “Our team is red hot! Help yourself to some red hot candy.”

After mumbling “oh, brother,” I decided to take them up on their offer, and unsheathed a fireball into my mouth.  I used to like them as a kid, so I went to work on one of those jawbreakers like it was 1974.

And within two minutes I was near-tears.  It was unbelievably hot, and just kept on going.  I seemed to remember layers of relief, but this thing was unrelenting and felt like it was burning a hole through my face.

“Holy fuck!” I hollered, and everybody laughed.  But I wasn’t trying to be funny.  It was like a hunk of plutonium in my mouth.  I kept gripping it between my front teeth, so it wasn’t touching any skin.  But even then… I could feel heat radiating off the thing.  I wanted to spit it into a trash can, but refused to be defeated.  Eventually it disappeared, leaving strips of dangling skin in its wake.

I used to like those things?!  Wonder if I would’ve also enjoyed an hour or two on “the rack” at the Tower of London?  Good god.

Have you had any recent encounters with the full-sized Atomic Fireballs?  The ones that are slightly smaller than a golf ball?  Please tell us about it.  Also, have you ever revisited a food that you remember liking, and was shocked at how bad it was?  That might be a long-shot, but it’s all I got.

I need to call it a day, my friends.  All four of us are going out to dinner tonight, which is super-rare.  So, I’ll see ya next time – whenever that happens to be.  My inner-Loverboy is weeping softly into his red leather pants…