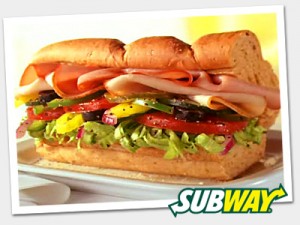 Yesterday I went to Subway for lunch, and had a foot-long turkey and black forest ham sub.  They call ’em hoagies up here in these parts, but I feel like an idiot saying that word.  Hoagie.  I try to avoid it, but sometimes it’s just not feasible.  When in Rome, you’ve got to douche it up like the Romans do…

In any case, I thought I’d break down the components for you guys.  No, this isn’t one of my poop updates (unfortunately), I’m just going to briefly tell you my immediate thoughts on each part of the sandwich.  Excited?  I don’t blame you.

Bread  I’m not really a fan of Subway’s bread.  It’s too chewy, if you know what I mean.  Sometimes you have to clamp down on it with your teeth, grip it with both hands, and pull.  That’s not really the way it’s supposed to work.  Your arm muscles shouldn’t be thrown into a state of full-flexation while eating a sandwich.

That being said, however, some days the Subway bread is better than others.  And yesterday’s was about as good as it gets.  Often it’s like that horrible candy called Circus Peanuts, but this time it was pretty close to Bread Classic.

The meat  I thought about buying the new fried chicken sub, which I’ve seen advertised on TV, but couldn’t pull the trigger.  For some reason I suspect it’s all microwaved and rubbery.  Am I wrong?  When they say “fried” I have a feeling it happens in a plant somewhere (probably Ohio), and arrives via UPS.  They aren’t frying up any chicken breasts at the local Subway, they’re just removing them from a heavy plastic transport sack and nuking the bastards.  Right?

So, I went with the cold cuts instead.  It’s also fairly disgusting, but I try not to think about it.  The turkey/ham combination was on sale this month, so that’s how I arrived at my specific decision.  It all tastes the same anyway, so who cares?

American cheese  I like a thick slice, which is why Panera’s sandwiches are so good.  They don’t skimp on the cheese heft at Panera…  Subway skimps, though, especially on the more premium offerings.  I like provolone, but it’s so thin… it’s just a hint of cheesy goodness.

So, I usually go with the thickest (cheapest) thing they offer:  white triangular pieces of American cheese.  Recently they’ve started arranging them differently, so there’s no overlap.  I preferred the old method, because you’d occasionally get a double-layer in your bites, and it was a pleasant surprise. Now there are no double-layers, unless you go in and move things around.  And I’m a very busy man; I don’t have time to be rearranging cheese.

Lettuce  I like shredded lettuce on a sandwich.  Why is it so much better than just a big flapping leaf?  Occasionally I shred it at home, but usually decide it’s too much of a hassle.  But when somebody else is doing the shredding, I’m there.

Tomato  Sometimes Wendy’s has a sign posted near their cash register that says something along these lines:  “Due to the recent drought, tomatoes are less plentiful than usual. We will include a tomato slice on your sandwich if you request one, but you’re shockingly selfish if you do.”

And I always say, “Be sure to slap a couple of tomato slices on that bitch!”  ‘Cause you’ve got to have it.  It’s a very important component, and the whole experience is ruined without it.  Tomatoes are the key to temperature calibration, consistency, and taste.  I don’t care about the drought.  Use a hose.  Sheesh.

Onions  I always say “and just a little bit of onions.”  They like to pile them on there, which leads to me pulling them off and getting my fingers all stanky.  And have you noticed how long a set of onion fingers will hang around?  For three days, that’s how long.

I prefer a light dusting of onions, and it’s difficult to achieve when somebody else is in charge.  I’ve considered knocking down the fourth wall, going around to the other side of the sneeze guard, and taking matters into my own hands.  But so far I haven’t had the courage to do it.  I’m generally cussing and stripping the things off after one bite.

Cucumbers  There was (is?) a restaurant in Greensboro called Spring Garden Bar and Grill that served turkey sandwiches with thin slices of cucumber on ’em.  I’d never had that particular topping on a sandwich before, and completely loved it.

When I think of that joint now, I recall two things: sandwiches with cucumbers, and a black man telling his friend, “Yeah, you can tell this is a white man’s bar… Motherfucker over there talking about his mailman.”  But that second thing has nothing to do with what we’re talking about here.

Ever since Subway began offering cukes on their sandwiches, I’ve been an enthusiastic user.  It’s fantastic, and I thank the Spring Garden Bar and Grill for widening my fixin’ horizons.

Green peppers  The best burp generators on the planet?  It’s debatable, of course, but green peppers are among the finest repeaters of them all.  They’re the gift that keeps on giving!  Plus, they’re crunchy and taste really good.  I’ve started ordering them on my burgers at Five Guys too, but they cut them in really thick hunks.  Subway does it better:  thinly sliced.  Mmmm… they make everything better.  For hours and hours.

Pepper  I used to order salt and pepper, but the meat (and probably the cheese) is already loaded with sodium.  So, now I go with a little pepper only, and it’s a perfect complement to a reasonably good lunch.

At this point the sandwich engineer will ALWAYS be taken aback when I say, “And that’s it.”  No mayonnaise?  Or mustard?  Or super-saturation of hair tonic, or whatever that oily shit is?  “No, that’ll do it,” I say.  And I get the feeling he doesn’t approve, as he reluctantly puts my sandwich inside the big condom.

And that’s the way I roll at Subway.  I told you this was going to be kick-ass!