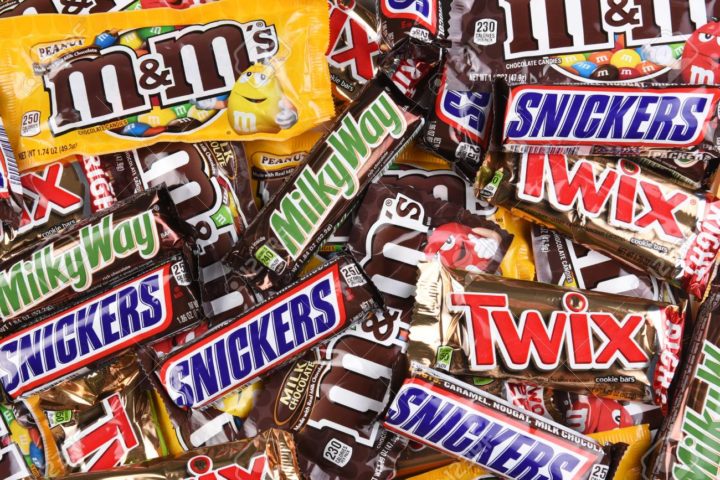 Last time we shared the candies we dislike, and today I’m going to make an effort to rank my Top 5 favorite candy bars. I don’t eat them all that often anymore, but I’ve rifled-down enough during my ridiculous life to have an opinion. And it’s difficult to limit it to just five. However… if I expand it to 10 it feels like I’m padding the list with a couple that are not top-tier. So, let’s give it a shot. Here are my five faves, ranked:

I realize there are a couple of controversial entries there. Including number five, which seems to be the most divisive candy bar of them all. But, what can I say? I love ’em! When I admit this, my heterosexuality is sometimes called into question. Because I enjoy a light and delightful candy bar?! Whatever. When I’m at Target or Walmart and spot a box o’ those beauties near the checkout, I’ll go for one every time. But I don’t see them as often as I used to, and it concerns me.

The other one that might surprise people is number two. Most of the top tier entries have been around for decades, but Take 5 is relatively new. And I find it amazing that such a perfect concoction was created at such a late date. 2004, according to Wikipedia. It feels like every combination must have surely been tested by then, right? But here we are. This is a solid and fantastic candy bar, definitely one of my favorites. I wish I had one right now.

Kit Kat kicks ass, needless to say. When we were in England they had a massive number of novelty versions, and I see a few over here too. But it’s the original that I love. Sure the Sunday Roast version is intriguing, and the Pepperoni Pizza Kit Kat is probably interesting, but just give me the tried and true. The best candy bar of them all!

The others are classics, and would probably appear on many Top 5 lists. The ones that were left off, but are also really good: Milky Way (like 3 Musketeers but with a ribbon of delicious caramel as a bonus), Almond Joy (I’m a big fan of coconut in this context. I don’t always like it, but it works here), and Payday (when they’re fresh they’re really good, but they are often semi-stale), and Caramello (damn, should this one be in my Top 5?!).

Some popular ones I don’t really like include Heath, Butterfinger, and Nestle Crunch. I like Krackel but Nestle Crunch makes me sad. It’s a poorly-executed knockoff, waxy as all fuck.

What do you have on this one? Tell us about it in the comments. Am I way off? Set me straight, won’t you?

And there’s a new podcast episode available, if you’re so inclined. Check it out here.