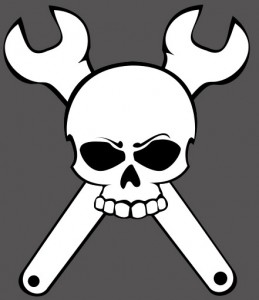 We moved into our current house in early 2000, and have had plumbing problems on a semi-regular basis, almost from the start.

In fact, there was a significant hidden issue even before we bought the place.  We had it inspected by a company with a good reputation, and prices to match.  And they let us down, big time.  The pricks.

The upstairs toilet was leaking underneath, inside the flooring, and within a month or so water was dripping through the ceiling downstairs.  When the contractor tore it apart, he said the thing had been leaking for many months.

We had to rebuild the entire floor in that room, replace the tile, and all manner of fantastic fun.  It cost us a lot of money, and we weren’t happy.  We had some cash saved to set up our new home, and a big hunk of it went, almost literally, down the toilet.

We tried to go after the inspection company, we even saw a lawyer about it, but their “guarantee” had more holes in it than our main turd-transport pipe.  It was worded so they were almost completely protected, and didn’t really have to perform much of a service.

Anyway, fast-forward to 2009, and guess what’s happening?  That’s correct, water is leaking through the downstairs ceiling again!  In the exact same place.

On Friday we had a plumbing contractor look at it, and, among other things, he surgically removed the water spot with some kind of saw, and stuck his head up in there.  It’s that toilet again, and all the wood underneath is super-saturated – just like in May 2000.  Grrr…

We’d talked about replacing that crap-catcher, because there was something not-quite-right about it.  But we never got around to it.  Now we’ve got a mess on our hands.

The good news?  When we refinanced our mortgage last time, they talked us into buying a home warranty.  I think it was free for the first ninety days, then they added twelve dollars a month to our payments, or something along those lines.

And they’re actually going to pay for about two-thirds of this fiasco.  I’m shocked, if you want to know the truth.  I was braced for a long list of reasons they wouldn’t “be able” to cover our claim.

So, this time we’re doing it right.  That old Lyndon Johnson toilet is being put out to pasture, and everything’s going to be new.  Everything from the sub-flooring on up.  I’m tired of monkeying around with it.  By this time next week we should have a commercial-grade toilet in there, so powerful it’ll suck the intestines right out of ya.

And it’s not going to cost us a ton of money, either.  We’re going to have to pay for the upgrades, but the main work is covered.  Considering everything we’re having done, we’re getting off easy.

They’re starting on Wednesday morning, and will be blasting out the tile with some sort of air gun, or whatever.  Mildly concerning…

Yesterday we decided on the new fancy-pants flooring, and they’re going to bring three toilets to our house(!), so we can spend a little time with each before making our decision.  Heh.  I’ll be wanting to take all of them for a test-drive; a new toilet is a big deal, and shouldn’t be taken lightly.

Yes, it’s already been a memorable experience, and promises to get even better.  Here are a few random notes from My Friday With a Plumber:

When he stuck his head inside the new hole in our downstairs ceiling, he howled in protest and said there was a “bee’s nest” in there.  Inside our house??  What the?

He flicked it a few times, and nothing happened.  So he just casually plucked it out of there, like he was picking an apple.  I nearly dropped a rectal plate.  I’d never seen a person grab a hive like that.

“Bees were living underneath our toilet?” I stammered.

“So, a whole swarm of yellow jackets could’ve flown straight up my ass?”

“Ha, that would’ve been something to see…”

He rigged the toilet so it wouldn’t leak in the short term, but warned me not to allow anyone to sit on it, unless there’s an emergency.  “If someone’s on it, and starts hearing an unusual noise or feels the toilet tilting, they need to abandon ship – right now!”

Gulp.  I guess I’d better stay away from Starbucks for the next few days…?

He told me one of his customers had paid a company to do a complete remodel of her bathroom, and after about two months the toilet started sinking into the floor.  He said the thing was radically unlevel; the people were shitting on a slant.

Baffled, he cut into the floor, and found a piece of plywood and all the usual stuff.  But below it were cardboard boxes.  The builder had cut corners by using cardboard boxes as shim material!

Have you ever heard of such a thing?  I’m having a hard time believing that one…  I mean, seriously.

He also said a “large” woman had a water leak in her living room, but they couldn’t find the source of it.  There were no pipes where the water was coming through the drywall, and they didn’t see any problems in the upstairs bathroom.

He said he and his team spent many hours there, trying to get to the bottom of it.  He wondered if the size of the woman might have something to do with it, and quietly had his biggest helper stand inside the shower.  Nothing.  Nothing was leaking.

Eventually, after several return visits, he met the woman’s boyfriend – also morbidly obese.  Between the two of them, he said, they must’ve weighed 700 pounds.

He went about it delicately, but finally got her to admit that she and her boyfriend like to take showers together.  They were doing it a couple of times per week.  So, he loaded up the shower with three or four people, approximately the same weight as the couple, and the mystery was solved.

Yes, the guy’s a hell of a storyteller.  I wouldn’t mind having a few Yuenglings with him someday.  I have a feeling we’ve only scratched the surface of the tip of the iceberg here.

And since we’re getting ready to drop more than a thousand bucks on this crap, I’ll try to turn it into a Question…

Use the comments link to tell us about the last time you spent more than a grand all at once, for one particular thing.  Was it more exciting than a new toilet that won’t go crashing through the floor following a violent Burrito Supreme blowout?

I seriously doubt it, but who knows?  What did you buy the last time you spent more than a thousand dollars on something?

And I’ll get back to the normal stupidity tomorrow.