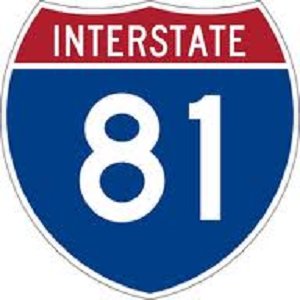 I was driving to work on Sunday, southbound on I-81 (the Devil’s Parkway), when my rear passenger tire shit the bed.  I’d been rolling along, singing loudly to “Bright Future in Sales” by Fountains of Wayne, and my world suddenly went wobbly.  The car felt weird, there was a new sound I didn’t like, followed by a pronounced jimmying.

I pulled off on the shoulder, checked my mirrors until there was a brief gap in the high-speed projectiles of steel and glass, and jumped out to take a look.  The rear passenger tire was flat, and the car looked collapsed and kind of sad.

What the heck, man??  Tractor trailers were rocketing past, each nearly sucking the clothes off my body, and I was convinced one of the drivers of the cars would be texting, drift, and crash into the rear of my Camry.  And everyone within fifty yards would be roasted alive inside the resulting fireball.

I climbed across the guard rail, and began looking through my credit cards ‘n’ crap, hoping to find a AAA card.  I had it, amazingly enough, and called the number on the front.  A recording asked me to say the name of the city I was nearest, and I yelled, “WILKES-BARRE!!”  It was so loud out there, I thought I needed to scream.

“If Rochester is correct, press one,” the voice answered.

WTF?  I pressed two, tried it again, and had similar results.  Finally, a real woman came on the line, and she asked a million questions. I could barely hear her, because of all the traffic noise, and she eventually transferred me to another woman who asked the exact same questions, in the exact same order.

Both were friendly, however, and the second one told me help would be arriving within thirty minutes.  I thanked her, and started pacing back and forth.  I looked at the car, and knew I could change the tire.  But then I looked at the vehicles screaming past, five feet to the left of it, and decided I’d just wait for a professional.

And within ten minutes, maybe less, a wrecker pulled in behind me.  The guy was cool, told me I’d picked a dangerous place to get a flat, and went to work.  He put a heavy-duty jack under the car, lifted it off the ground, removed the lug nuts with a battery powered apparatus, and had the full-sized spare on there in less than 45 seconds.

I offered him some cash, and he wouldn’t take it.  So I just thanked him and took off.

I don’t know if I got lucky, or if AAA has greatly improved their service, but that was about as good as it gets.  Especially for me.  I was braced for some kind of tragi-comedy, but it was almost completely painless.  We allowed our AAA membership to lapse for about a year, but rejoined just a couple months ago.  Money well-spent.

Thanks to everyone who has purchased the Kindle and Nook versions of Crossroads Road.  If you haven’t yet, what are you waiting for?  Here are your links, once again:

Thanks, also, to everyone who pre-ordered a signed copy of the trade paperback.  I received the proof copy of the paperback on Friday, but there was a problem.  Amazon’s software stripped out one entire layer of color from the artwork, and we had to submit a revised production file.  But everything should be cool now, and we’ll get that party started momentarily.

So far, I haven’t heard from Apple about my application to be a vendor in their iBooks store.  Grrr…  I’m trying, I really am.  Please stay tuned.

And finally, thanks to everyone who’s helped me spread the word about Crossroads Road on the internet.  Please don’t let up.  This needs to be exposed to folks outside the Surf Report community, and I need your assistance with that.  Please harass everyone you know who has a sense of humor, and the absence of a stick up their ass.  It’s much appreciated.

For the Question of the Day, please tell us your stories of car trouble, mechanical breakdowns, tire blowouts, engine fires, etc.  You know, your most memorable vehicular malfunction tales.

Use the comments section below, and I’ll be back tomorrow.