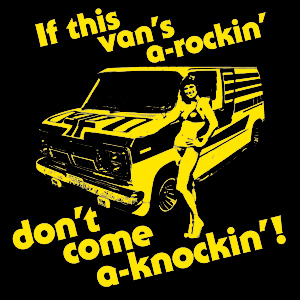 During the years immediately following my high school graduation, I dabbled in college and worked at a filthy grocery store located within easy walking distance of my parents’ house.  It was a ridiculous place, run by crooks and alcoholics, and I was a so-called stocker.  Which meant I stocked the shelves, but also did whatever else the red-nosed managers ordered me to do.

We stockers bagged groceries, operated cash registers, collected carts in the parking lot, refilled vending machines, climbed up on the roof to change the sign, ground hamburger, swept the floors, swabbed toilets, built displays, and just about anything else that happens in a grocery store.

A person accustomed to working in a strict union shop would’ve had a stroke in that place.  We did it all, whenever the drunks demanded.  And received minimum wage, and a daily ration of insults, in return.

Probably because of the constant abuse, the stockers were unusually close.  We looked out for each other, and were kinda-sorta friends.  At least while we were working.  It was one of those “unite or die” situations.

And during the middle part of my tenure there, a new stocker was hired.  He was an older guy, probably in his early thirties, and was known only as Brogan.  I assume that was his last name, but I’m not completely sure.

For years, we learned, Brogan had worked at the Volkswagen plant across the river, and had been making some unimaginable amount of money.  Something like $18.00 an hour, which seemed impossible to us; we each worked full-time, and brought home about $104.00 per week.

He and a few hundred of his coworkers had been laid-off from that plant, and Brogan wasn’t taking it well.  The man was in a downward-spiral.  He was big and burly, but had massive plum-colored bags under his eyes.  He looked like an unmade bed, at all times.

But he fit right in, and we liked him.  He told us stories about his wild drunken escapades, and they invariably ended with him having some form of taboo sex with a divorcee in the back of his van.  He picked them up in the lounge at Smiley’s, a questionable motel that catered to long-haul truckers.

Most of us were in high school, or recently graduated, and Brogan’s tales were amazing, a huge hit.  We’d gather around him, like we were in the presence of Moses himself, and hang on his every word.  And he never let us down; he had the storytelling abilities of a seasoned master.

Since he was at Smiley’s Lounge every (every!) night of the week, and had trouble making it to work in the mornings, he started parking his big ol’ Chevy van outside the store.  He’d catch a few winks of drunken slumber there, and shortly before he was supposed to punch-in, one of us would walk across the parking lot and bang on the driver’s side window.

A few minutes later Brogan would come dragging in, unshaven, his clothes all messed up, and his hair going in every direction at once.  He always looked like hell on those days, and usually smelled like stale liquor and cigarettes.  He’d drink three or four outsize tankards of coffee from the deli, and eventually start to reanimate.

Then he’d tell us about the night before…

I think somebody must have questioned the truthfulness of Brogan’s tales of relentless debauchery, because he arrived one morning with a tape recorder.  He had us gather around, and hit the play button.

And what we heard was high-tempo squeaking, occasional grunts, and Winston-ravaged moaning.  It sounded like a couple of rutting boars in a brass bed.  And it went on and on and on…

I couldn’t believe it.  We could barely make eye contact with each other.  Brogan finally explained that he’d hidden the recorder inside his van, for our benefit.  You know, since we’d questioned his honor.

We listened intently, but once we’d heard five minutes of this horrible noise, we got the general idea.  Brogan, sensing he was losing his audience, hit the fast forward button, to get to “the good part.”

But he went too far, and when he hit play again we heard the sound of someone pissing, like Niagara Falls.  Apparently the pair finished, and Brogan had stepped outside the van for a few moments.  What a romantic evening that must’ve been…

Yes, he was a memorable character, for sure.  But he didn’t stick around long.  The day our store manager told us we’d have to start wearing ties to work, was the beginning of the end.

All of us groaned at this news, but Brogan argued.  He also yelled, and used an abundance of profanity, right in the faces of the manager and an assistant, and in front of the other stockers.

They didn’t care for his combativeness and disrespect, and told him he’d either be wearing a tie the next morning, or be unemployed.

So, Brogan showed up the next day wearing a tie — but no shirt.  He was stripped to the waist, except for a blue necktie.  And he just started working, like it was any other day.

The assistant manager (the same guy from the day before) almost exploded a blood vessel in his neck, and came charging out of the office.  He was sputtering belligerence in red-faced outrage, and told Brogan to get out.

The two of them walked outside and we could see the assistant manager yelling and waving his hands around.  It was incredible.  Brogan was, like, the greatest person ever.

And somehow he wasn’t fired (he was likable as all hell), but the assistant told our hero he’d be spending the day cleaning out “the trash house.”

This was the worst job in the whole store.  The trash house was a room on the back of the building, with a door that opened to the parking lot.  It was always full of slimy rotting garbage, decomposing heads of cabbage, and all manner of nastiness.  The smells that emanated from that thing are unlike any I’ve encountered since.

But Brogan didn’t seem to care.  He pulled his van over, cranked some Ted Nugent, and got to work.  He was using a snow shovel to remove the filth, and singing along.  He was seemingly having a great time, and this irritated management, of course.

One of them finally went out and told him to turn off the music, claiming it was annoying the customers.

And that’s when our shirtless friend overplayed his hand…

Brogan grabbed a sign that had previously been part of a wine display.  It was on a stick and looked like a picket sign.  He walked to the front of the store, near the main entrance, and started marching up and down the sidewalk chanting, “Higher wages!  Better working conditions!”  with this wine advertisement over his shoulder.

Every member of management almost went full-Scanners and converged on the guy.  And after a few minutes Brogan got into his van, drove away, and we never saw him again.

And you know that Eminen song where he brags, “And it feels so empty without me.”  Well, that’s exactly the way we felt.  After Brogan disappeared, there was a sizable void in the place.  The guy was larger than life, and it felt so empty without him.

I’d love to know where he ended up, but have no idea.  I don’t even know his first name, so it would be hard to track him down.

Anyway, Brogan was a memorable character I have known.  And I’ll tell you about others in future updates.

If you’d like, please tell us about a memorable character you have known.  Use the comments link below.