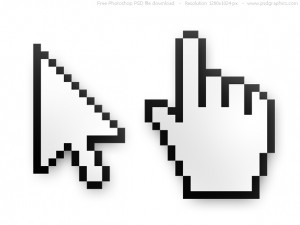 Last night at work a woman was watching a training video on a computer near mine.  The video was minimized, so it wasn’t taking up the entire screen, if you know what I mean.  Yet, she left the cursor on the picture, in the upper left quadrant to be exact.  And it was making me crazy.

I tried not to look at it, but couldn’t stop myself.  Every 30 seconds or so, I glanced over to see if she’d moved the cursor away from the video.  But she never did.  It made my entire body go rigid.  It was all I could do not to scream ENOUGH!! and physically commandeer her mouse.

Then, during lunch break, that very same woman made a comment about the way some guy was eating his sandwich.  It was inside a baggie, and he was slowly feeding it upward and eating from the exposed edge.  It was kind of weird, but I hadn’t seized on it.  I saw the guy eating his sandwich like a Gogurt, but it didn’t bother me for some reason.

And how is that possible?  How did the cursor bug the shit out of me, and the push-up sandwich didn’t?  And vice-versa with my co-worker?  It’s difficult to understand.

Toney can hear our dog Andy lick his lips from one end of the house to the other, and I don’t even notice it.  But when our kids go into their bedrooms and play battle of the bands — one blasting Led Zeppelin, the other the Dead Kennedys — at ear-splitting volume, it’s as if she doesn’t hear it.  She zeroes in on the subtle lip-smacking of a dog, but doesn’t notice pure, undiluted cacophony.

And our youngest boy HATES when people repeatedly hit their forks on their dinner plates.  It makes him insane (I’m with him), but he and his brother crack their knuckles continuously.  “Stop it!” I holler, my eyes bugging out with agitation.  One unnecessary sound bothers him, and the other doesn’t even make it onto his radar screen.  Why is that?

Back to lip-smacking for a second…  If I hear a person doing it, I feel like I’m about to jump out of my skin, and leave a husky husk behind.  But when Andy does it… I don’t notice it.  People should know better, I think, and dogs are dogs.  They walk around hoping to get a whiff of stale piss, regularly lick their own asses, and eat garbage with gusto.  I tend to expect more from adult humans.  Right?

Or is it something else?  Do you harbor any such contradictions?  If this bugs me, why doesn’t that?  That kind of thing?  If so, please tell us about it in the comments. And if you can explain some of it, that would be cool too.