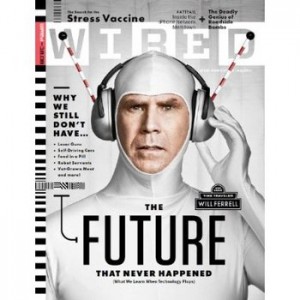 About a year ago I went on a tangent and subscribed to a bunch of magazines.  They’re usually really cheap at Amazon, and I thought I could use a few more obligations in my life…  What the hell was I thinking?

Now all of them have expired, and I only want to continue with two:  Wired and Entertainment Weekly (aka The Crapper’s Companion).  All the others were almost completely ignored, including two past favorites, Rolling Stone and Esquire.  So, I’m going to let them go.

Do you subscribe to any magazines?  During the pre-internet days I loved them.  In fact, one of my favorite places in the world was a good newsstand.  Whenever I was traveling, I’d try to find the best newsstand in the area, and would devote at least an hour to checking out all the great stuff there.  I was convinced that stores in different states had wildly differing inventory.

I especially liked the ones that carried British music magazines, like New Musical Express and Melody Maker.  They were always about three months out of date and very expensive, but I didn’t care.  They’d come all the way from England.  One time I bought a British music mag (Sounds?), and it had an Adam and the Ants button attached to the cover.  I about shit my pants with excitement.

I also liked the stores that were a little extra-hip, and carried some of the old punk zines, like Maximum Rock ‘n’ Roll and Flipside.  Some of them even carried a few wildly exotic titles such as Boston Rock – which was excellent.

I even subscribed to the Village Voice for several years, when I was a teenager.  I loved to look at the ads for all the punk shows that would be happening during the upcoming week.  It all seemed impossibly faraway, almost like a different planet.

And sometimes I’d go rogue, buy something completely off the wall, and see if I might find something interesting inside.  Like OMNI, or Psychology Today (I ain’t shittin’ ya).  And I’d occasionally dip my big Fritos toenail into comic books.  I liked the war stuff, like Sgt. Rock, G.I. Combat, and The Haunted Tank.

But now… I have a hard time working up a halfway decent give-a-shit about any of it.  Now all the decent music magazines cost about twelve dollars, and have a full-length CD taped to the front.  Funk dat.  And even the mags that are delivered straight to my front door are usually ignored for six months, then tossed into the trash.

Oh well.  At least Wired and Entertainment Weekly still get my blood pumping a little.  Do you subscribe to any magazines?  Which ones?  Do you actually read them, or is it just six months and out?  Tell us about it, won’t you?

The decline of the magazine has also ruined the shopping mall for me.  Years ago malls weren’t such a bad place, because they always had a bookstore or two — with a large newsstand.  But not anymore…  They’re all gone.

And there are no decent record stores in malls either.  Back when dinosaurs roamed the earth, places like National Record Mart would have a kick-ass cutout bin, and it was like a treasure hunt for me.  The cutout bin at NRM in the Huntington Mall yielded the first two Undertones albums, two early albums by The Jam, and the original double-album Nuggets compilation.  All absolute classics, for something like $2.99 each.

Now it’s just FYE and shitholes like that.  I won’t even walk into those places.

There’s nothing at the mall for me now…  It’s all clothing stores for women and/or teenagers, and places that apparently sell underwear to middle-schoolers.  WTF?  I feel like I’m committing a federal crime just walking past those places, with their life-size posters of 14 year old girls in bras and panties in the windows.

Sure, you might find a store that sells scented candles, or baseball caps, or vitamins.  But who gives a crap about any of that?  I don’t.

The food courts aren’t even any good nowadays.  Back in the day they had Orange Julius and Chick-fil-A, but our mall just has the standard fast food joints, and a horrible Chinese swillateria.  Oh, and that place that sells thick-ass slices of stuffed pizza for six dollars a throw…  No thanks.

So, I guess what I’m saying is that the internet has taken the place of magazines, newsstands, record stores, and shopping malls for me.  I still can’t get a Chick-fil-A sandwich through my computer, but it’s only a matter of time.

What do you like about shopping malls?  Anything?  What stores do you actually enjoy visiting?  What about the food?  Didn’t it seem better during the 1980s?

Also, please tell us about your magazine habits, circa 2011.