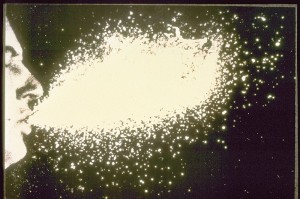 My breathing bags are under assault.  Somebody said it’s ragweed that’s causing the entire world to sneeze and snort right now?  I don’t know if that’s true, but I’m a physical wreck.  And that’s a fact.  My lungs are inflamed, the left nose hole is continuously dripping, and my equilibrium is off.  I feel really weird, and last night at work sucked.

But just one more shift and I’m a free man for a few days.  My work week ends at 1:30 am.  I’m seriously considering working on Saturday again, for the additional dollars, but I’ll have Thursday and Friday to decompress.  It seems like I’ve been running wide-open for weeks on end.

I worked this past Saturday night, and it felt like Sunday.  I worked Sunday, and it was some sort of detached otherworldly day, belonging nowhere.  I was off on Monday (mowing my ass down to a smoldering nub), and it felt like Saturday.  And when I returned to work yesterday, it was like Sunday again.  Man, I’m all jacked-up….

Toney and the boys are at work/school today, so it’s just me and Andy (Blacklips Houlihan, Mayor McStench).  After I came downstairs this morning, and was puttering around with the coffee maker, I heard lots and lots of sirens.  And I immediately started imagining all sorts of horrible scenarios involving family members.

Do you do this?  Or am I just unusually neurotic?  Whenever somebody isn’t home, and I hear or see an ambulance, I have to text the absent person and make sure they’re OK.  I’m convinced the “amba-lance” is racing to their side, and someone will eventually shout, “Bring that with us!  Maybe they’ll be able to sew it back on!!”

Is that just me?

Next week I’m going into the yurt, starting on Tuesday.  I rented it Tue/Wed/Thur, and tried for Fri, as well.  But they’re all booked-up.  I think I’ll be able to finish the latest incarnation of my “book” during that marathon session, and might be in a position to submit it (again) to my agent during the following week.

And here’s what I’m going to purchase for my three days inside the ludicrous forest hut:  five gallons of water (no running water in the yurt), a pound of Dunkin Donuts coffee, a small container of milk (for the coffee), a half case of Mountain Dew, a large box of Little Debbie Oatmeal Creme Pies (tradition), a family size sack of chips, and a daily footlong sub sandwich from Sheetz or Subway.

I might also buy a Mariah Carey frozen meal, in case I pull a late-nighter, and need an emergency supplement.  But I don’t really like being out there late at night.  I know I probably sound like a ball-baby bitch (copyright Sunshine, all rights reserved), but I’m usually the only person in the campground… it’s incredibly dark… and kinda… Blair Witch, if you know what I mean.  I’m OK inside the yurt, but outside always feels like the early scenes of a horror movie, right before everything is plunged into unspeakable bloodletting and terror.

And on the following week Steve and I will be traveling to Philadelphia, to see the Eels.  So, it’s a full docket, as usual.  But that’s the way I like it, I now realize.  And just so you’re up to date, I just sneezed seven times in a row…

The Question of the Day:  Have you ever written a letter to a celebrity?  If so, what happened?  Did they write you back?  Were you satisfied with their response?  I guess we can include Twitter interactions and that sort of thing, as well, but I’m mostly thinking about actual letters through the mail.  Tell us your stories in the comments section below.

Many years ago, some of you might remember, I sent an identical letter (along with a self-addressed stamped envelope) to several people I admire, and logged the results here.  As you can see, most didn’t respond, the pricks.  Soupy did, though!  He was awesome.

Holy crap!  Five of them are now dead!!

In any case, I’m thinking about repeating the experiment, and would like to get your suggestions on people to contact.  Who do you think would be appropriate?  Which celebs or sorta celebs should I write, and ask for an autograph?  Help me out, won’t you?

I’ll be back tomorrow, with more of this hard-hitting journalism.