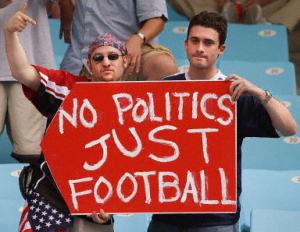 I’ll be voting tomorrow, as soon as I get two or three cups of coffee down my neck.  I have a strong opinion about it, but won’t be sharing it with you guys.  No need to thank me…

I was sitting somewhere eating a bowl of potato soup yesterday (purposely vague), while everybody talked politics around me.  And I was cringing like I was entered in a cringing contest.  So much disinformation… so much propaganda being regurgitated… so little understanding about the way things really work…

I don’t pretend to be a political scientist, but come on.  Before you form your angry opinions about shit, it might be a good idea to move beyond the bulleted talking points of your favorite political party.  I just sat there, listening to all this crapola — from both ends o’ the spectrum — and continued spooning soup into my mouth, with no expression on my face.

And I thought, “Why are so many people unable to stay out of these kinds of conversations?”  Of course, years ago I would’ve inserted my little smug and sarcastic barbs, too.  I used to be one of them, but now that I actually know a few things… I have no desire to get into it; the urge has completely left me.

It’s why I discourage political talk at the Surf Report.  It makes me crazy.  The people who are really into it spew “facts” they learned at partisan cable channels and blogs.  And the casual participants usually just cling to whatever party their father and grandfathers belonged to, with all the ancient stereotypes attached.  Eventually people just start shouting, and aren’t too interested in listening.  No opinions are ever swayed, people just get pissed off and/or sound like complete maniacs.

So, I have my opinions, and I’ll be going to the polls tomorrow and voting a certain way.  And that’s where it ends for me.  I won’t be sermonizing, I won’t be going door to door like a Jehovah’s Witness, and I won’t be waving a signboard like I’m on Let’s Make a Deal.  I’m just going to pull the lever for my guys, and go to work.

By the way, I also started out clinging to my dad’s political party, and now I’ve gone in the opposite direction.  The transformation was complete around 2000, I’d say, when I was 37.  And it’s something we don’t talk about around the Thanksgiving table, thank you very much.

Please don’t argue about Obama and Romney… It’s really dull and annoying.  But I’d like to know if you’ve changed your political opinions through the years.  Or if you’ve remained the same.  Did your original views come from your folks, like most people?  Or, like the two guys above, do you just not give a crap?

Also, have you ever lost friends or contact with relatives because of political differences? Do you argue, or just keep eating your soup in silence?  Please tell us about it.

I know I’m playing with fire here, asking for comments about politics, and not wanting political arguments.  Especially on the day before a presidential election.  But let’s give it a shot.