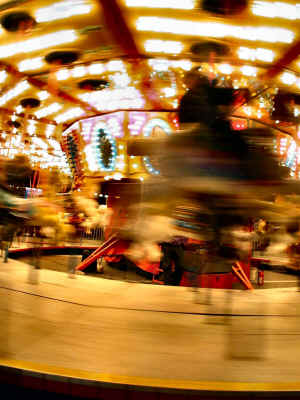 On Friday we went to Knoebels in (as my spiritual adviser Bob Mould would put it) black sheets of rain.  It was a planned event for the older Secret’s swim team, and another kid was riding with us…  Otherwise we would’ve postponed it.  I mean, seriously.

We drove in a torrential downpour almost the whole way, and my wipers were going so fast I was afraid they might fly off and go sailing end-over-end into the woods.  And the main street in our little town was like a fast-moving creek; at one point an empty Tide bottle passed us on the right.

Toney was in constant contact with other people in our loose-knit entourage, and we were informed that traffic was stopped cold on I-81 (go figure).  So we left the interstate and just started driving in the general direction of the amusement park.

This threw Penelope, our British GPS guide, into a tizzy, and she kept trying to convince us to turn around and get back on 81.  But we continued, in a defiant manner, and she finally recalculated our asses to Knoebels, without using the Devil’s Parkway.  And we arrived at least a half-hour before everyone else, even though we were the last to leave our house…

As is the tradition, we stopped at the bathrooms when we first got there (it’s a long drive), and some old man sidled up to the urinal next to mine.  And he said, “Oh my god, this rain is going right through me.  I’ve spent the whole morning in the bathroom!”

What the hell?  What was he talking about??  Rain doesn’t make a person pee, does it?

The boys immediately rode several rides, in a full-on rainstorm.  And within minutes I was completely soaked, my t-shirt drooping and weighing about thirty pounds.

We bought a pizza (damn good), and dried off a little, but got drenched again once the pie disappeared.  It was crazy, but it’s a funny thing…  After about 45 minutes of continuous bitching, I got used to it.  Eventually I didn’t really even notice the rain anymore.  I guess it’s possible to adapt to almost anything?

And surprisingly enough, nearly every ride remained open.  The crowd was pretty light (of course), and it felt like we had the run of the place.  The younger Secret and I rode the Phoenix roller coaster, got off, and right back on again.  Usually we’re standing in line like a foo’ for an hour.

I know it probably sounds strange, but it wasn’t a bad day.  Not at all.  We had instant access to all the rides, and had a great time.  I don’t think I can fully endorse the idea of visiting an amusement park in a monsoon, but it worked for us… somehow.

A few random notes from the day:

While the Secrets and their (odd) friend were on something called the Downdraft, someone’s shoe came flying off the ride and nearly hit Toney.  It went sailing past her right shoulder, and ended up in some decorative foliage.  I’m just glad it wasn’t a prosthetic, or a set of false teeth.

While on the Phoenix I cooked up an idea for the future…  Near the beginning of the ride you go through a pitch-black tunnel for an extended period, and I’d like to someday pretend to vomit in the darkness.  Maybe I could smuggle on a freezer bag full of bean with bacon soup, make puking sounds, and sling the contents over my shoulder?  What do you think?

And right before the rain finally ended, we overheard a woman tell her husband, “This rain is making me go to the bathroom all the time.  It’s going right through me!”  What in the pearl-handled hell?!  What are these people talking about??  I seriously have no idea.

Finally, my food intake for the day:  three slices of pizza, a half pound of cashews, a sweet tea slushie, and two ice cream cones (chocolate/vanilla swirl, and Moose Tracks).  Knoebels has great food, at decent prices, and I do my best to, um, support their efforts.

And that’s pretty much it.  Are you planning any end-of-summer events?  We’ve only got a few short weeks before school cranks back up again, and are going to try to squeeze in a quick trip to my parents’ house in West Virginia.  We haven’t been there in a long time, and I’m fairly wracked with guilt.

What about you?  Is the summer fun over, or are you just getting started?  Tell us about it in the comments, won’t you?

And please remember… I’m trying something new this week: updating twice a day.  So don’t forget about this morning’s update, right below this one.  I also posted a review of the Long John Silver’s fish taco on Sunday, so check that one out, as well.