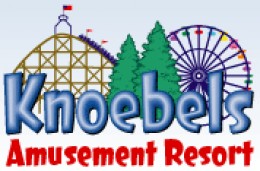 On Friday evening Toney noted that none of us were scheduled to work the next day, and suggested we seize the opportunity and spend the day at Knoebels. It’s a great old amusement park an hour or so from here, and we try to go a couple of times every summer. So far this year, we hadn’t been.

And it wasn’t horrible — the boys seemed to have fun. But the place was incredibly crowded, and bubbling over with white trash. I’m not sure if we’d ever been there on a Saturday. We always go on a weekday, when it’s not so… colorful. On Saturday it felt like we’d been sucked inside a Walmartnado.

Sideshow-caliber obesity I’m not exactly petite, but felt like a tiny sprite of a man on Saturday. If your self-esteem needs a booster shot, I recommend a weekend afternoon at Knoebels. You’ll come out of it feeling like one of the beautiful people, and find yourself holding up a pinky while drinking and eating, for at least 24 hours.

Godawful tattoos At this point in history I don’t have a problem with tasteful tats. They’re so common, I barely even notice the good ones anymore. But on Saturday there were lots and lots of bad ones. You know, things like cartoon characters flipping the middle finger, and profanity-laced phrases. Anything “bad ass.” Also, tattoos on necks, faces, hands, and backs of thighs. Those, I notice.

Clothing from a different era I think many people stopped paying attention to the world around them the day they downed their first Milwaukee’s Best. That’s my theory, anyway. They got stuck there, and have continued to wear the fashions, listen to the music, and use the cultural references that were current when they had their first beer. Hence: Flashdance shirts, stone-washed denim, t-shirts with fringe on the bottom, REO Speedwagon cassettes, and “Lighten up, Francis.” Am I wrong?

Recent injuries On Saturday I saw dozens of arm slings, casts, crutches, and neck braces. What the hell is going on?! Did these people just return from a battlefield somewhere? The whole thing had a distinct Civil War feel to it. I expected to see muskets, and little kids playing drums and marching into the sunset.

Communicating via hollering Once again, I’m confused. I just don’t understand why so many people insist on arriving at a place, going off in different directions, and YELLING to one another. “Colt! Don’t eat that!! Get over here! Colt!!” How about just staying together, and talking in normal conversational tones? Is that too “uptown?”

Perpetual anger You’d think that people who defiantly live life on their own terms would be happy and fulfilled, right? Folks who live by the mantra “I don’t care what anybody thinks of me” should theoretically be the happiest amongst us. Yet, they’re seemingly pissed-off most of the time. Go figure.

It was an interesting exercise, that taught me a valuable lesson: never again on Saturday. It started out PACKED, with Disney-like lines at every ride, and only got worse as the day progressed. I’m assuming many of the parents had to sleep one off, and got a late start? I’m only guessing.

I love Knoebels, I really do. But we’ll be visiting on weekdays from now on, thank you very much. For a Question, I’d like to know about your encounters with the Walmartnado. Where have you tangled with it recently? Please tell us your tales in the comments section below.