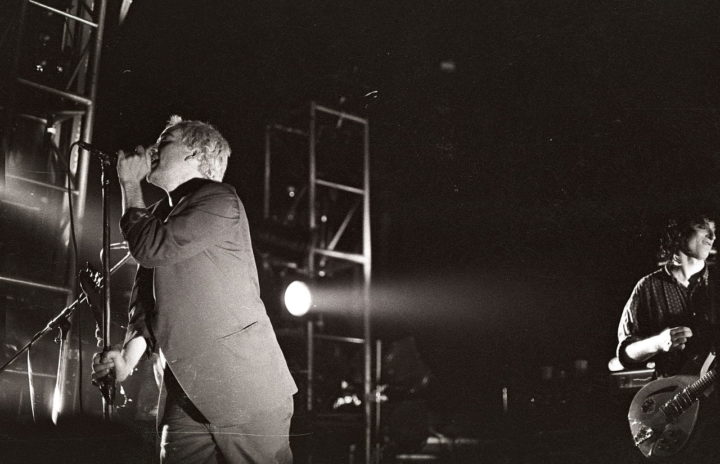 When I was 22 I finally moved out of my parents’ house, and out of West Virginia at the same time. On what felt like a whim, I just packed up all my shit and moved to Greensboro, NC. I was going nowhere fast and needed some kind of dramatic shakeup. So, I got a job in Greensboro stocking shelves at a Food Lion grocery store, and was fairly miserable and sad for a while. I think I moved in October, and Thanksgiving that year was especially tough on your corpulent correspondent. Oh, I was having a pity party to rival all previous such events combined.

But I now had access to some interesting live music. In West Virginia it was just stuff like Journey and Kansas and Jefferson Starship. But I was suddenly living in a place where I could actually see some of the crazy underground bands I listened to. If I dared to go in search of the venues, that is… I had no idea where anything was, and was mildly intimidated.

The first such show was R.E.M. and The Minutemen at a high school auditorium in Winston-Salem, on December 8, 1985. I remember I asked my roommate (now deceased) if he wanted to go with me, His ears perked up when he thought I said R.E.O., but lost interest once I clarified. So, I went by myself.

It was great, and I couldn’t believe I was actually seeing it. I was probably the most appreciative sumbitch in the hall that night. It was so much cooler than Foreigner/Wet Willie/Nantucket at the Huntington Civic Center. I remember the crowd wasn’t very kind to The Minutemen, which I didn’t care for. Do you know what you’re witnessing, people? Do you know how thankful you should be?! Indeed, D. Boon, one of the leaders of the band, died exactly two weeks later in a traffic accident. Hey, my conscience is clear. But I can’t speak for anyone else there that night. Sheesh.

Anyway… a few days ago I did a Google search for the exact date of that show for some reason, and found something that blows my mind. Check it out. It’s some kind of home decorating piece for yuppies and assholes who care deeply about quartz counter tops and his & her sinks in the en suite. It’s bizarre. Why would they choose that particular band, that particular show, in that particular city? The chances are remote, right? We’ll probably see the Property Brothers hanging one of those things soon, during the fake rushing-around segment right before the “big reveal.” One of them will hang it on a wall, the other will do a final karate chop to an accent pillow, and invite in the couple.

It’s weird. If I were the high-horse type I could probably fashion some kind of self-righteous protest about phony nostalgia, or corporate America appropriating and profiting from my cherished life experiences, or something. But I’m clearly not very good at such things. Does it bother me that shitheads all over the world will probably have that poster hanging in their houses and apartments, but didn’t actually attend the show? No. What do I care? Fuck ’em.

Here’s the actual poster for that concert, by the way. The new poster isn’t even a reprint of the original, it’s some kind of cool and with-it modern thing. Hey, whatever. I’m probably going to buy one, anyway. The smallest one, for the bunker. Right? Gotta do it. I was there, goddammit! BTW, the photo above was taken during the 1985 tour, but NOT in Winston-Salem.

Speaking of buying stuff, it’s time to start reminding you guys to please use one of our Amazon links while doing your holiday shopping. Or your personal shopping. It’s all the same to me. Just click through, shop like normal, and Amazon will give me a small percentage of whatever you spend. It’s painless, and costs you nothing extra. Thanks in advance!

I don’t really have a Question. If you’d like to help me with my high-horse protest, that would be OK. My brain doesn’t work that way, I don’t find great joy in being aggrieved like many people do. Also, I’d be interested in knowing about the times you’ve been truly homesick. That Thanksgiving I reference above was terrible. I had dinner by myself in a Shoney’s restaurant that was filled with laughing and smiling families. And I was off to the side at a table for one. The waitress was clearly taking pity on me, and I lashed out at her during a disagreement about pie. It was ugly. The woman was just trying to be nice, but all I could think about was my family back home in Dunbar, sitting around the table without me. So I was mean to a waitress who was working on Thanksgiving, and trying to be friendly. Good job! Or we can go with the most memorable concert you’ve seen. I’m not sure the high school R.E.M. show was my most memorable, but it was definitely one of ’em.