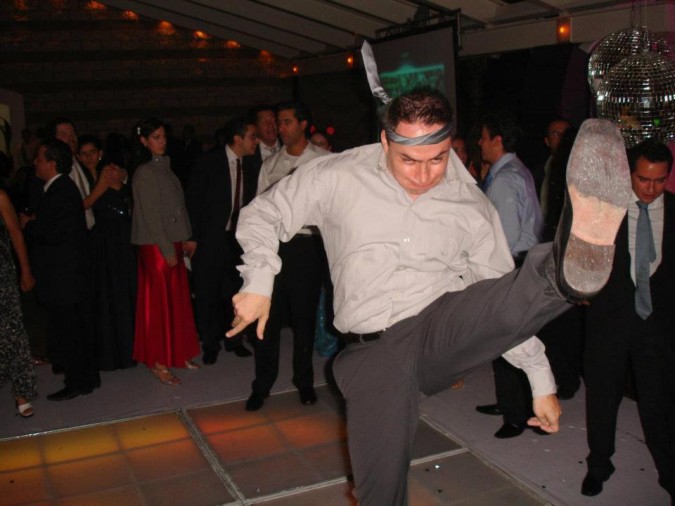 I haven’t been to an enormous number of weddings, and of the ones I have attended… many were in West Virginia and featured a reception in the basement of a church or something similar. There was no booze at most of these shindigs, just non-alcoholic punch and a sheet cake from the Kroger deli. I’m getting a little sad, just thinking about it.

Needless to say, my own wedding was the exact opposite. Toney and I went to the office of a local judge with his own radio show (Legal Action with Gary Jackson), and he did the “ceremony” right there between the conference table and a fire exit. Then we had a booze-fueled party at Swissotel in the Buckhead section of Atlanta. The food was great (I hear), and the alcohol was flowin’. Much of it was a blur, but at one point I was dancing to Kool and the Gang with Sunshine. Ha! It was a good time.

There was a lot of drinking at my brother’s wedding, as well. In fact, I made the indefensible error of mixing wine, beer, and liquor that night, and things took a dark turn. The next day I felt like I’d been embalmed. We had to drive from somewhere in Pennsylvania (Busted Whistle? Upper Slackjaw Township?) to Columbus, Ohio. It’s a long story… But Toney was pissed at me, on account of my asshattery the night before, and I felt like I was in the late stages of cholera, or somesuch. It was one of the more miserable days of my life.

Toney and I also attended a wild wedding on Jekyll Island, Georgia. Supposedly all bar tab records were broken that night, and that hotel has been in business for a LONG time. It was a lot of fun, and people were certainly boozin’ it up. But things didn’t get too far out of hand, as far as I know. Nothing like this happened, unfortunately:

And so… my exposure to wild drunken weddings is somewhat limited. Our older son, however, works at a country club, and comes home with some amazing tales. This place is fancy-pants indeed, and the boy manages the pool during the summer, and works in the dining room during the cold months.

They rent to non-members for special events like wedding receptions, awards ceremonies, etc. Usually it goes reasonably well, but every once in a while they get a rowdy bunch in there. A few weeks ago they had a wedding that was quite possibly the craziest of them all. At least during his two-year or so tenure.

He said a woman well into her 50s slumped forward in her chair, out on the patio, and they thought she’d stopped breathing. An ambulance was called, and paramedics determined she was just very drunk. Also, a guy wound up and hurled a rocks glass across the dining room, like he was Cesar Geronimo trying to throw a runner out at home plate — for no known reason. They called the police and had him removed.

Later, the boy and a couple of other workers were on the patio moving some furniture around, and noticed some dude across the road walking along a high stone wall. He was clearly drunk, and was just walking along. Whatever. They continued to work, and our son said he looked over just as the guy fell off, and did a full header on the lawn. He said he must’ve just passed out in mid-stride, because he didn’t even use his arms to break the fall. They ran over to check on him, and he seemed OK.

A little while later the guy returned to the dining room, covered in dirt and grass stains, and tried to order another drink at the bar. They wouldn’t serve him, because he was so sloshed, and he went wild and touched off a giant fist fight. He was reportedly calling everybody — male and female — a “bitch,” over and over again. The cops were summoned for the second time, and a few people were hauled away.

The boy said they had to keep running drunk ‘n’ wandering people out of areas of the club that were off-limits, and he and his co-workers were outside with hoses spraying vomit off the pavement at 2 am. After everybody finally left, he said, they found about a dozen suit jackets and several shoes — a few pairs and a handful of singles. Heh.

Man, I wish I’d been there. That would be an evening of primo people-watching, right there. I’d just sit back, sip a few Yuenglings, and take it all in.

Have you ever attended an especially crazy wedding? With fist fights and the police, and that sort of thing? Or maybe it was crazy for other reasons? If so, please tell us about it in the comments. I’ve apparently lived a sheltered life in this regard, but hopefully you guys have some stories to tell?

Check out Ridiculous Adventures In Suburbia, Volume One for Kindle, Nook, and Kobo!