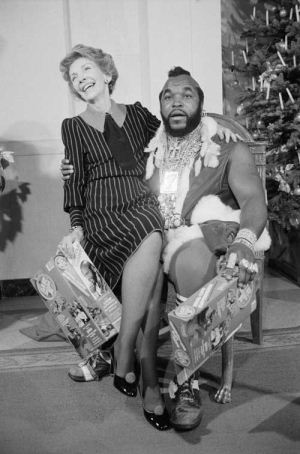 A couple of months ago Toney started working part-time for the company that employs me.  I almost never see her there, it’s a sizable operation, but I’m always thrown for a loop whenever I run into her in the hall, or the break room.  It all just feels… weird and wrong.

I know my wife in certain settings, you see, and work isn’t one of them.  Of course I don’t mind seeing there, it just doesn’t compute; my brain has trouble processing it.  She’s an unlikely presence… like if I saw Condoleezza Rice at a GWAR concert, or footage of Dick Van Dyke on the International Space Station.  It’s bizarre.

Yesterday’s lunch with Chuck, an old classmate from Dunbar High, felt a little like that.  I hadn’t seen him in 30 years, which adds to the weirdness, but also the non-Dunbar setting felt strange.  It was fine, but caused my equilibrium to go slightly out of kilter.

When we were in England a few years ago, our younger son was wearing a sweatshirt with the name of our local high school on the front.  We were at the Tower of London, looking forward to seeing the torture chambers, when some woman walked up and said, “Excuse me, are you folks from Pennsylvania?”  Turned out, her daughter was a teacher at the elementary school, which is located a rock’s throw from our house.  We were in England!  What are the odds?

I remember when I was a kid we’d routinely run into people we knew, while on vacation.  This wasn’t the most amazing thing in the world, since everybody went to Myrtle Beach during the summer, but it always caused my brain to meltdown a little, anyway.  It was unlikely people, in an unlikely setting.  Know what I mean?

And this is a quickie, but it was almost a no update day.  I’ve got challenges here, my friends…  But, I’m hoping you guys will be able to take up my slack.

In the comments section below, please tell us about your mind-blowing encounters featuring unlikely people in unlikely places.  Did you see Willie Mays skiing?  An old co-worker while on safari in Africa?  Or even something a little less exotic?  If so, we’ll need to know about it.

And I’ll try to do better tomorrow.