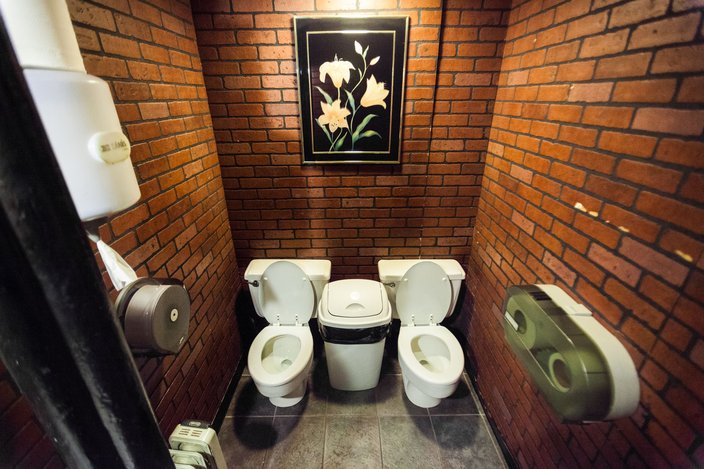 This is going to be super-quick. I hazz no time. So, I’ll just get to the point, ask my question, and let you guys take it from there. Sound good? Good.

A few days ago I went into the men’s room at the Wendy’s near my house. I try not to use public restrooms, on account of the the awkwardness and the shit mist that hangs in the air. But sometimes you’ve just gotta let the piss pony run. Right?

So, I went in there and was instantly reminded of that bathroom’s ludicrous configuration. It’s a small room, weirdly-shaped, and there’s a sink and one stall. But inside that stall are both a toilet and a urinal. So… how’s that supposed to work? Two dudes go in there and engage both pieces of hardware simultaneously, behind a locked door? That’s too weird to even contemplate. Who thought of this layout??

Thankfully nobody else was in there, and I was able to complete my urination equestrian event without incident. But it got me to thinking about the worst public bathrooms I’ve encountered in my life. A few notables jump to mind.

I’ve been in multiple situations where there are no individual urinals, just a big open bathtub-like trough against the wall. So, you have to sidle up to that thing, and pee shoulder-to-shoulder with some stranger. It’s horrendous. Maybe I’m the weird one, but I don’t want to urinate with a bunch of other dudes… wangs out, with the very real possibility of friendly-fire splashback.

The worst such situation was in an old stadium somewhere. I can’t remember where… It was an old place, built during the early part of the 20th Century, it feels like. And they had a big circular piss-catcher in the middle of the floor. There was water running through it, continuously. But what kind of freak thought of this?? You not only have to stand shoulder-to-shoulder like the bathtub thing I described above, but you’re also standing across from some other guy with his schlong extracted from his trousers. It’s unbelievable! It’s as if they invented it with maximum lack of privacy as their goal.

What do you have on this? I’ve also been in bathrooms that were laid out OK but trashed. Like the one in the basement of a rock club in North Carolina. The men’s room was just a big room with a toilet, two or three urinals, and no dividers whatsoever. I walked in there one time and a guy was attempting to take a dump in the toilet, and he was right there. The seat had long ago been wrenched off and was gone forever. So, he was attempting to hover above it and barely able to keep his balance. I think I audibly reacted to that terrible scene, and so did he as I walked through the door. Ugh.

And I remember the bathroom at a ZZ Top/Loverboy show a million years ago, at the Charleston Civic Center. I went in there and it was loaded with drunken hooting hillbillies urinating into anything that was even mildly toilet-suggestive. That included all of the sinks, the trash cans, old beer cups, and the drain in the middle of the floor. People were just pissing everywhere, and it sounded like Niagara Falls in that room. It’s obvious at this point that I’ll be scarred for life.

What do you have on this subject? Please use the comments to fill us in.

And before I sign off, here’s your link to the Thursday podcast episode. And this is the summary:

In this one, I go against my own advice and tell you about a weird dream I had involving a cigarette-smoking 1970s TV star, a job interview that took a surprising turn at the end, my new 256-gigabyte memory card and thoughts about my first computer, which had a 1.3-gigabyte hard drive. I also tell you about my triumphant return to KFC and reveal the Whistle Dick of the Week. Enjoy!