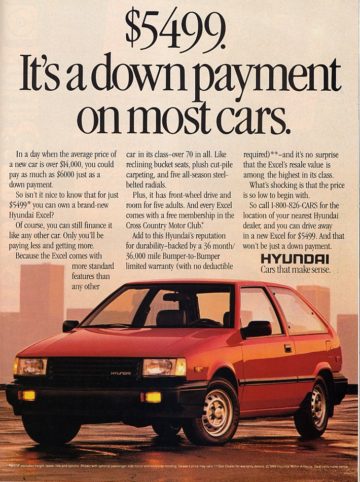 Thankfully I’ve never really owned a complete piece of shit car. I had a couple that started out OK, and I kept driving them until they became pieces of shit. And I had a Blazer that made me crazy. But I’ve been pretty lucky, overall.

I had a Chevy Luv truck that was, perhaps, my favorite vehicle. I don’t remember what model it was, probably 1981 or 1982. I bought it in West Virginia, shortly before I left for North Carolina. And I kept on driving it, until it started to literally disintegrate. The floor was rotting out, and mud would come flying into the cab whenever I drove during or after a rain. I’d routinely arrive at my destination wet and filthy.

I also went to war with General Motors over that truck, because the transmission went out in it, after something like 12,000 miles. I filed a complaint with the Better Business Bureau, and they conducted a hearing on the matter. I was an absolute dipshit in his early 20s, going up against a team of GM lawyers. And I came out of that room practially holding a bloody rag to my ass. They probably spent $5000 to make sure they wouldn’t have to pay me $800. Or something.

But I loved that Luv. It was a great little truck, and I wish I still had it now. But once it started rotting away, and returning to the Earth, I traded it in on the first brand-new car I’d ever owned: a 1989 Hyundai Excel. It was dark blue, looked great, and was impossibly inexpensive.

My dad did not approve. A Korean car? Why not Mexican, or something engineered and manufactured in the Soviet Union? But it was reliable and comfortable, and was a make they didn’t even SELL in West Virginia in those days. I’d go home for a few days, and people would be fascinated by that thing. Until they found out it was Korean. Then there would be meaningful glances exchanged, and half-smirks galore.

Anyway, it was a good car until it reached 100,000 miles. It feels like the trouble started on the exact day it turned over from 99,999. Everything started coming apart on me, and I was paying crazy repair bills. It went from good car to absolute piece of shit almost literally overnight.

Eventually I was driving around with a case of oil in the trunk, and would have to add more to the engine multiple times per day. I parked it on the street when I was at home, because I didn’t want our driveway to be covered in motor oil. I’m sure the neighbors were thrilled. It would take a few hours, but the stuff would eventually transition from the car to the pavement below. I had people look at it, and the repair bill would’ve been more than the vehicle was worth. I needed to off-load that bastard, but still owed money on it.

I remember standing at a dealership, talking to a salesmen, and seeing a rivulet of oil coming down the hill from underneath my car, to where we were standing. I tried to be nonchalant about it, but it kept getting closer and closer. I could see it in my peripheral vision, inching toward our feet. I ended up trading it for an almost-new Mazda Protege, but had to roll the remainder of what I owed on the Hyundai into the new car. Somehow I’m probably still paying for that hunk o’ junk. And that’s not really even a joke.

But the worst vehicle I ever owned was purchased here, in Pennsylvania. It was an almost-new Chevy Blazer. I bought it from a real dealership, and it had a limited warranty. Which apparently means it’s limited to the problems you’re not currently encountering. That thing had electrical problems from the get-go. There was no issue with the engine or the transmission, or anything like that. But the electronics were all fucked-up in it. It made me insane. I wanted to roll it off a cliff, or set fire to it. I hated that thing with the intensity of a thousand suns. I know it’s not fair, but I’m not sure I’ll ever buy another GM product. It was a straight-up lemon.

What about you? Have you ever owned any rolling shitboxes? Please tell us about ’em. My brother had some terrible car that would start to overheat whenever he’d stop at a red light. There’d be smoke coming out from all four sides of the hood. Heh. Do you have any stories like that? If so, please share them in the comments section.

And I’m going back to work! Yes, there’s electricity in the air, my friends.