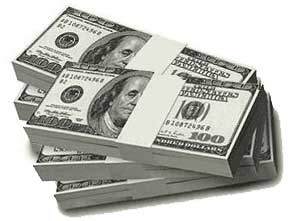 It amazes me when I see people paying for gas with cash.  I haven’t done that in years.  The thought of actually going inside the store and waiting in line behind the cig buyers and li’l chocolate wax donuts addicts, seems like a ritual from a different era.

In fact, I don’t pay for anything, above, say, five bucks, with cash.  Except for fast food and the vending machines at work, I’m almost completely cash-free at this point.  I have two bank cards that get a good workout, and a few credit cards for larger things, and that’s how I roll.

I generally have a few dollars in my pocket, in case of emergency (Snickers), but it’s not unusual for me to go two or three days without seeing real money.  Years ago, in the ’90s or earlier, experts predicted we’d be a cashless society soon, and I thought they were out of their minds.  Now I’m almost there.

Occasionally I’ll hear people at work asking about their paycheck, and what time of the day they can come pick it up.  And it irritates me.  It’s none of my business, and I don’t say anything about it anymore, but come on.  This is, like, 2008 or something.  There’s this thing called direct deposit, popularized during the Reagan years, that works pretty well.

I used to ask people about it, attempting to mask my judgmental attitude, and there seems to be two standard explanations for not using direct deposit.  They don’t trust it, or (and this is my favorite) they say, “I want to SEE my money.”

Maybe both are the same explanation, said in different ways?  I don’t know.  But that second one always got me.  I want to see my money?  Oh brother.  These are the same kinds of people who describe a fender bender by puffing their chests out, hooking their thumbs under their belts and saying, “Welp… Ford and Toyota decided to get into a fight, and Ford won.”  What?  Can you maybe just tell me what happened, without getting all hick-theatrical with it?

Yes, I believe they’re the “see my money” folk.  Them, and the people who back into parking spaces.  But don’t get me started on that…

I just can’t imagine driving to my job on a day off, picking up an IOU printed on a slip of paper, shuttling it across town to a bank, waiting in line at the drive-thru (or inside with the Civil War vets), handing the paper to a person sitting on a hyper-extended chair, waiting for them to hand me ANOTHER slip of paper confirming the IOU has been acknowledged, along with a white moneyvelope, or whatever those things are called.  What is this, 1965?  It’s amazing to me.

Hell, our bank is in California.  We have a local savings account, for the rare occasion when we need to cash a paper check, but 99.99% of our banking is done through a credit union in Hollywood, California.  We liked it when we lived there, and never stopped using it.  Under normal circumstances there’s no need to visit a bricks and mortar bank, and we’re proof of it.  We take cash from the fee-free ATM at Sheetz, and we’re good to go.

Like I say, it’s none of my business, and I’m getting better about keeping my mouth shut, but it bugs the crap out of me when people are afraid of technology.  That’s the automatic reaction, for many.  Not “Holy shit, that’s amazing!” but “Ohh, I don’t know about that… it seems risky.”  That attitude chaps my riffled ass.

I’m not always an early adopter of technology, but it’s generally a case of me not fully understanding the benefits.  Like iPods, for instance, or RSS.  I was late to the party with both.  But it wasn’t because of fear, it was because I didn’t understand how it was an improvement over the status quo.  What’s wrong with CDs?  And what’s so horrible about actually visiting websites?  Now, of course, I couldn’t function without my iPod and Google Reader.

Anyway, I saw someone paying for gas yesterday with cash money, and it got me all whipped up.  I was there buying a Mountain Dew Throwback, and all the stuff above started rampaging through my head.  Until, of course, I noticed the free-standing Mallo Cup display beside the checkout, and my thoughts went rocketing off in a whole different direction.  Shit, maybe it IS 1965?

So, what do you think?  Am I wrong?  How close to cashless are you, at this point?  Do you need to see your money?  Do you start sentences with “Welp?”  Use the comments to set me straight.