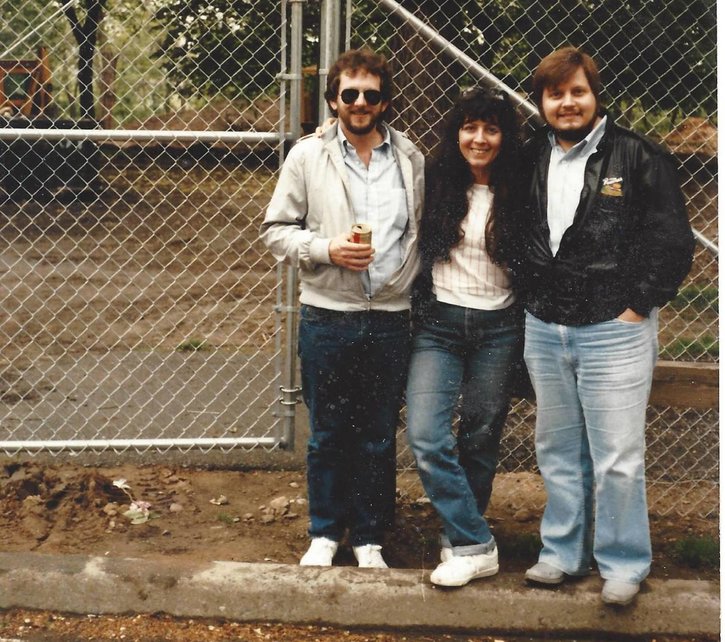 Somebody posted this picture to a Peaches Records & Tapes page at Facebook yesterday. It’s taken in NYC during the early 1980s, in front of what eventually became the Strawberry Fields section of Central Park. The guy on the left, with the can in his hand, was the director of the Greensboro Peaches store when I worked there. And he was one of the best bosses I ever had.

His name is Jeff, and he was curmudgeonly and grouchy, which is something I relate to for some reason. I remember a girl named Cathy called him one day and said she wouldn’t be in, because she was too “stressed out” to work. Jeff said, “Just imagine how stressed out you’re going to be tomorrow when you’re applying for unemployment.” Ha! We need more guys like him in charge.

He also informed me I was getting fat at some point, and needed to cut back on the Twinkies, or whatever. “Your fat ass is bad for business!” he “joked.” It was a simpler time…

And we had a bin near the front door where we offered cassettes and LPs, 2 for $10. Or sometimes 3 for $10. Each month a different record company was featured there, and whenever it was almost time for CBS (now Sony), I placed the order for the product.

One time I got a little fancy with it, a little cute, and ordered 25 copies of The Best of Bill Withers on cassette. His big hit “Lean on Me” had been remade and was all over the radio again. I believed I could sell a bunch of those sumbitches, because the original version of the song was included. Usually I just went with all the early Aerosmiths and “Bat Out of Hell” and the first two Boston albums… I did that too, to a lesser degree, but was also trying to be creative.

Yeah, and when all those tapes arrived Jeff almost had an aneurysm. He kept yelling at me, “Are you under some kind of duress?? Fucking Bill Withers?! Oh my god, my head’s going to explode!! Help me understand what’s going on here!” He went full Sam Kinison on my ass, but I was convinced I’d prove him wrong. I still believed I’d made the right call.

And you can probably guess what happened… I think we sold one copy during the entire month. We had to return 24 tapes, which went against the store’s return allowance. It was an unforced error, and he never stopped bringing it up to me. “Bill Withers…” he’d mumble, and shake his head in disgust.

His use of the word “duress” during that receiving dock meltdown killed me.  I don’t know why, but it still makes me laugh. His eyes were bugging out of his head he was so pissed. “Are you under some kind of duress??”

So, yeah. He was gruff and plainspoken, but he was also a hell of a good guy, and a great boss. He could tell I was into it, and spent extra time with me, teaching me about the music industry, etc. By the time I moved on I was a manager and buyer and even wrote the radio ads for the store. He had me involved in everything, and it boosted my confidence and prepared me for my future job at Warner/Elektra/Atlantic.

He didn’t hesitate to tell me when I’d screwed up (in fact, I think it brought him great joy), but he seemed to believe in me. That’s no small thing, and is fairly rare. Most people can’t be bothered, one way or the other. Jeff put some effort into developing a few of us who showed promise, and it was a big deal for me. It changed my life in certain ways.

We’ve talked about our worst bosses here many times, but I’d like to invite you to tell us about your best bosses today. Why were they the best? Use the comments link to bring us up to date on it.