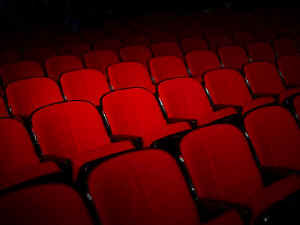 I went to a lot of movies as a teenager, and engaged in a fair share of theater hijinks.  Today I’ll briefly tell you about a few of the disgraceful episodes that jump immediately to mind, and turn it over to you guys.  Hopefully you’ll have some similar stories to share, and we can have a little fun with the subject.  You know… raising unholy hell in movie houses.

Bill and I, and another friend named Tim, attended a midnight movie in Charleston one Saturday night, where they featured a bunch of rare Three Stooges shorts.  Supposedly they had never been shown on television, and had rarely been seen since their original run in theaters, during the 1940s.

It sounded cool, but alcohol entered the picture and everything went circling down the ol’ poop catcher.

We were out drinking beer during the evening of the Stooges, and stopped at a grocery store where Bill worked.  Probably to buy more beer at the unofficial employee discount price of 90% off…  And after our visit there, I learned that Bill now had his jacket pockets filled with all sorts of bizarre shit.

We continued drinking heavily, picked up Tim, and headed to Charleston.  And as soon as the lights were dimmed in the theater, we started throwing the stuff that was harvested from the grocery store.

I remember Bill side-arming a handful of chocolate chips, like a German WWII soldier hurling a grenade from a trench.  They rained down on a group of people seated several rows in front of us, and all of them howled in protest.

After we stopped laughing, we broke into a package of raw hot dogs, and began flinging them, end-over-end into the audience.  One was lofted a little too high, and was briefly illuminated by the projector light, high above the crowd.  This time we couldn’t stop laughing.

Bill also had bottles of beer in his pockets, and we drank those, then rolled them toward the front, underneath the seats.  The noise the rolling bottles made was flat-out hilarious, and we just kept laughing and laughing.

We continued throwing chocolate chips (it sounded like one of those rain sticks when a handful would come crashing down), and uncooked wieners.  Heh.  Can you imagine being hit in the side of the face, inside a darkened movie theater, by a clammy, airborne hot dog?

Miraculously, we didn’t get thrown out of the place, and nobody tried to kick our asses.  But at some point Tim had had enough, and got up and left.  He was a Stooges fan, and also stone-cold sober.  For some reason he didn’t share our enthusiasm for the comedy gold we were generating over and over again.  It’s still puzzling to me…  But he took off, and that effectively ended our evening of advanced film appreciation.

I’ll have to check with Bill or Tim on this, but I think there was a third item we hurled during the movie.  Possibly baloney slices?  I’m not sure about that, but I seem to remember throwing baloney like Frisbees.  I’ll have to get back to you on it.

On a similar note, we went to several screenings of the Rocky Horror Picture Show, and the first one was incredible.  They were selling – actually selling! – throwables in the lobby.  Man, this was a dream come true.  We queued-up and purchased all sorts of stuff.  Amazing.

And when we walked into the theater, it was pure pandemonium.  Everybody was throwing handfuls of rice, and some people were standing on their chairs, taking big wind-ups like baseball pitchers.  It looked like we were walking into a snowstorm, and as we made our way to the seats, I was hit in the side of the face with a load of rice (I guess) that was moving at such a high rate of speed, it felt like a shotgun blast.

“Shit!” I shouted, and we all hunkered down and continued.

Eventually some douche from the local rock radio station appeared, and asked everyone to be quiet.  He finally started his little speech, and Steve jumped to his feet and threw a wadded-up soda cup or paper bag, and hit the guy in the center of the chest.  The crowd roared, the dude gave us all the finger, and stormed out of the room.

During the movie people just continuously, without let-up, hurled handfuls of rice.  I was afraid I might lose my eyesight before it was all over.  And they were throwing slices of toast, pieces of theater seats, random trash from the floor…  It was pure insanity.

At least a couple of people were taken out of there holding bloody napkins to the sides of their heads.  And some unknown girl was hit in the face by a flashlight battery.

It was fantastic!  One of the greatest things I’d ever experienced.  But it would never be repeated, because the theater clamped-down hard the following week.  We returned (of course), but they wouldn’t allow any nonsense.  And what kind of boolshit is that?

I found grains of rice in my jacket for three months, and after I took a shower the next morning it looked like someone had dumped a side dish from Panda Express on the floor drain.  I excitedly told my parents about it all, and they thought I was exaggerating.  But it was as great as I described it.

During that same era, Bill and I and a friend named Vincent, went to see Taxi Driver at a midnight movie.  The place was almost empty, so we sat in the dead center, about halfway back.  We’d been drinking (needless to say), and Vincent eventually fell asleep.

He was out cold, and leaning slightly forward and to the right.  Bill and I were elbowing each other in a “check it out” sorta way.  And one of us got an idea…

Nearby, on the floor, was a discarded popcorn bucket.  We grabbed it, placed it gingerly on top of Vincent’s head – and left.  As we exited the theater we turned and looked, and he was seated, all alone, tilted in that weird way, wearing a popcorn crown.

We waited outside, and within ten minutes he came tearing through the doors, completely and fully pissed-off.  God, I’m laughing right now, just thinking about it.  Funny stuff.

Rocky and I, and probably some other people, went to a midnight movie showing of The Warriors one Saturday night, and I went to the counter to order popcorn.  But, in my compromised state, I unknowingly said the word “pizza” instead of “popcorn.”  The cashier chuckled, and said, “What do you want on it?”  The guy was practically smirking at me.  What the hell?

“Butter!” I shouted, all exasperated, and the dude buckled over in laughter.

I realized what had happened, my face went red with embarrassment, and I said something along the lines of “Yeah, well fuck you and fuck your popcorn machine, too!”  And as I walked away in a huff, I heard the laughter crank up yet another notch.  Good god!

I have a lot of other movie theater stories I could tell, but this one’s getting kinda lengthy.  Like Pinocchio…  So, I’m going to turn it over to you guys now.  If you have any raising hell in a movie theater tales to tell, please do so in the comments section below.

And I’ll see you again on Tuesday.