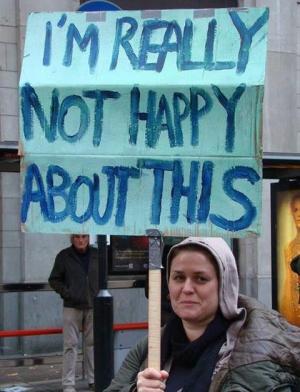 I’m in a horrible mood, and have been all week. I thought today was going to be different, because I don’t have to go to work, and also got a lot of sleep. These are rarities, which usually put a spring in my step.

Indeed, I woke up in a decent mood. I put half-a-pot of coffee on to brew, pulled my phone off its charger, and let Andy out for a quick pee. But I’m waiting on a couple of important emails, and neither arrived while I snoozed. So, that set the tone.

Then the younger boy came home from school, and would barely talk to me. I tried, but he was having none of it. It’s pretty standard with him; he’s detached and aloof, like many 14 year olds. But it pissed me off. I hadn’t seen him since Sunday, and he just got on the computer and tuned me out.

So I went to the library, where I’m writing this update. I’ll try to stop my whining HERE. I apologize. I’m well on my way to becoming one of those old complaining bastards at Denny’s. All that’s missing is a white Sea World cap.

A few days ago I left for work, and almost immediately the Check Engine light came on in my car. I’d never even seen it before, and it freaked me out a little. I went straight to the garage we use, the guy hooked it up to an apparatus, and told me I have two potential problems.

One is no big deal: the gas cap wasn’t on very tight, and some air got into the tank. The older boy had put gas in it the night before, and didn’t properly replace the cap.

However, the dude also said I might have an issue with the catalytic converter. None of it made any sense to me, but it went something like this: “Blah blah blah blah $750.”

I talked to my dad, who was a mechanic, and he wasn’t buying it. And I spoke to a guy at Toyota, who also wasn’t buying it. Both said it was almost certainly not a problem with the catalytic converter. So, I feel a lot better. The light hasn’t come back on, and I’ve been driving it for several days. Hopefully it was just the gas cap. I’m not taking any further action, until I see that terrible light again.

Toney defended the boy. She said, “Don’t yell at him, for not tightening the gas cap.” Like I’m some tyrant. Hell, I wasn’t even planning to mention it to him.

But it got me to thinking about all the times I got yelled at, because of some dumbass action I took in one of my parents’ cars. Here are a few:

One day I jumped into my mother’s Monte Carlo, which was parked inside our garage. I hit the automatic door opener, waited for it to go up, and backed straight into my dad’s car, which was parked on the driveway. In one smooth motion I wrecked both our vehicles. There was some yelling.

Another time I was out drinking with Bill, and we stopped to buy gas. I pumped a few dollars-worth into the tank, and drove off without replacing the cap. I think I left it sitting on top of the pump. My dad discovered it a few days later, and wasn’t happy. How could I be mad at my own son, for doing something not nearly as stoopid as I’d done?

A couple of years later, my dad found a condom wrapper in the back of his station wagon (who said I’m not a genuine West Virginian?!). He didn’t say anything to me about it, but told me he’d cleaned up the car, and asked me not to get it dirty. Then, when I opened the driver’s door, there was the wrapper. He’d left it on the seat, for my benefit. Just so I knew he knew… I couldn’t look him in the eye for a month.

I also got the thing buried to the frame in mud one night (it’s a long story), and had to call a wrecker to pull it out. I tried to spray it off, but didn’t do a very good job. There was some more yelling.

And my girlfriend and I got caught having sex in the Monte Carlo, by a couple of Dunbar cops. They shined a flashlight into the backseat, while we were fully engaged. They asked for my ID, said, “Hey, are you John Kay’s boy?!” and started snickering. They let us go, but I have no doubt my dad was told about it within ten minutes. He knew all those guys. My girlfriend and I went to her house, silent and shell-shocked. We sat on her couch for about five minutes, staring straight ahead. Then we both started laughing, and couldn’t stop. My parents never said a word about it.

There are undoubtedly a dozen more stories I could add to this sad line-up, but I’m going to turn it over to you folks now. In the comments section, please tell us your tales of getting into trouble, while driving your parents’ cars. Hopefully I’m not alone?