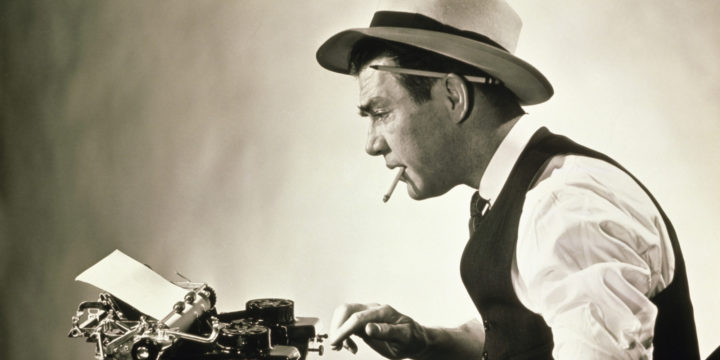 During high school a few people from my journalism class took a trip to Columbus, Ohio, where we participated in some sort of training at Ohio State. I seriously can’t remember much about it, but don’t believe we stayed overnight. If we had there would’ve been shenanigans. And I recall no shenanigans. It feels like we went in somebody’s van, up and back in one long day. All of it’s very foggy in my mind, except for a handful of random memories.

I remember visiting a factory where our school paper (The Kennel) was printed. They had a scary machine with powerful hydraulic blades that would cut through foot-tall stacks of paper, in an instant. To operate it, you had to push two buttons on opposite sides of the apparatus, so both your hands were in use. That thing would lop off an arm so cleanly, it probably wouldn’t start bleeding for a half-hour. It made me nervous, and I gave it a wide berth as I walked past. I thought I might get sucked into it.

Also, I remember everyone playing some kind of big-time nerd game while driving back, during which someone would hum the theme song of a TV show and everybody would try to guess the program. Needless to say, I did not participate. I mean, seriously. However, at some point I did say, “Hey, I got one!” Then I made ticking sounds for about ten seconds. Everybody stared at me in confusion, and I shouted, “60 Minutes!” They all laughed, even the hard bitches who hated me and all I stand for.

But the most vivid memory was of some kind of training session led by a grizzled veteran newspaperman. He was like something off TV: tough, rumpled, and intimidating. It was all classroom, until the end. Then he gave us an assignment (WTF??). He allotted us two or three hours to find some stranger on campus, interview him or her about something they had to overcome in life, write it up as a brief feature article, and return. The people who submitted the best pieces would win awards, he said, and their articles would be featured in a magazine or somesuch.

I about soiled my Towncrafts.

And I’ll give you three guesses what I did… That’s right, I made it all up. I didn’t interview anyone. I invented a person whose life was changed by a recently discovered love of photography, or maybe long distance running, or something along those lines. I created quotes, and a full background story. It was 100% fabricated.

I also made sure the article wasn’t very good. I didn’t have to try very hard, mind you. But I needed to be sure this giant load of horseshit didn’t receive any additional scrutiny. Ya know?

When I turned it in to the real-life Lou Grant, I could feel a bead of sweat run down the center of my back. Incredibly, he was reading each as the authors stood in front of him. Then he dispensed instant, tough-love feedback. He finished mine, grunted, and handed it back to me. “It’s not very good,” he said. (Whew!) He gave me some advice, and also criticized my use of the phrase “Junior High School.” Just say “High School,” he told me.

I walked away relieved and confused. Junior High School and High School are two different things. Right? Hey, whatever. I’d survived this unpleasantness. Lou could go fuck himself.

It worked out well, that day. But I’ve largely given up on bullshitting my way through things at this point. I’d much rather admit that I don’t know something, than to be caught trying to fake it. I’ve seen too many people at work get burned while trying to bullshit their way out of a tough spot, and it’s not worth it. Most of the time, folks appreciate your honesty if you just say something like, “I don’t know, but I’ll certainly find out.”

And today I think I’d try to actually do the Columbus assignment, instead of make it all up. It would be uncomfortable, but I could do it. Of course, the end result would probably be the same: “It’s not very good.” Then it would sting a lot more. So, there’s always a downside to putting in an honest effort, as well.

What are your thoughts on bullshitting? Have you ever tried and failed, in a spectacular fashion? Perhaps you’re good it? Have you witnessed somebody else being burned by trying to fake it? Do you do less of it now than when you were younger? Also, what would you have done if you were in my shoes in Columbus? Am I the weird one? I mean, I never even CONSIDERED actually doing the assignment. That would’ve been outside the realm of possibility. How about you?