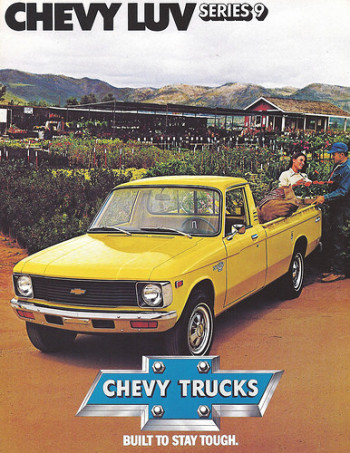 When I moved to Greensboro, NC, at the age of 22 or 23 (there’s some debate) I was driving a yellow Chevy Luv truck, very similar to the one in this ad. It remains one of my all-time favorite vehicles.

Yes, I loved the Luv, However… the transmission went out in it way too soon. It was a long time ago, and I can’t remember specific details. But the truck didn’t have many miles on it, when it completely and utterly shit the bed. I was furious, as well as panicked. My weekly take-home pay at that point was probably in the neighborhood of $200. So, what now?

Ha! Needless to say, I called my parents and they bailed me out. But I was placed on an informal repayment plan, which I couldn’t afford. The whole thing infuriated me, because the truck was relatively new. I had plenty of questionable things going on in my life at that point, but transportation wasn’t one of them. This was NOT something I should’ve been dealing with. In my 22 (or 23) year old opinion, anyway.

So, I got all whipped up with righteous indignation, and started making phone calls. I remember talking to various people at General Motors (hilarious), and trying to be menacing and intimidating. I probably sounded like an eighth grader, making threats and using big words I didn’t fully understand.

But I sincerely believed I’d been wronged, and was getting no satisfaction. All those GM people were trained to say “fuck off” in the nicest way possible. And that just wound me up, tighter and tighter. Eventually, I took it too far. I filed a formal complaint with the Better Business Bureau. I didn’t know what that meant, or what would happen, but liked the sound of it. Unfortunately, it led to nothing but tears and humiliation.

I’d set a series of events into motion, that culminated with me attending a “hearing” inside some mysterious office building in Greensboro. I was, at the time, an even bigger dumbass than I am today. As Phil Hendrie would say, I couldn’t find it with both hands. But I walked in there confident and certain I had The Truth on my side.

The hearing was held inside a large conference room, and there were roughly ten people surrounding the big table. Including a few not-at-all-amused representatives from General Motors. Gulp. They were all wearing business suits, and carrying expensive-looking leather binders. I was probably wearing a Fetchin’ Bones t-shirt, or possibly Scruffy the Cat. And I was carrying nothing but the expression of a person who suddenly realizes they’re in way over their head.

Indeed, it didn’t go well. The mediator was not impressed by the fact I had no maintenance records, or that I’d purchased the vehicle used from an individual I had no information about. My only defense: the transmission shouldn’t have gone out, after so few miles. I just kept saying that, over and over. But I couldn’t prove that I hadn’t abused the truck, or that the previous owner hadn’t pulled it out of the ocean, or somesuch. The people at that table had arrived expecting an interesting conversation, but GM’s people just steamrolled right over me. It was over before it started. I walked out of there holding a metaphorical bloody rag to my ass.

The only real punch I landed was when they asked me where I purchased the truck. After I told them Charleston, West Virginia, some twerpy little shit began rifling through a reference book of some sort, and announced that Charleston is so many feet above sea level, and is situated in hilly terrain, blah blah blah, which could put strain on a car’s transmission. I said, “So, what you’re saying is, nobody who lives in West Virginia should buy a car from General Motors, because they can’t handle it?” That was my one brief moment of glory. But, they had plenty of those moments, and I only had one. It was a rough hour, my friends. Exceedingly rough.

Have you ever gotten yourself all fired up about something, and ended up biting off more than you can chew? Or, just found yourself in way over your head, for some other reason? Please tell us your stories in the comments section. And I’m going to work now: a big super-sized eleven-hour day. My nipples are exploding with delight.