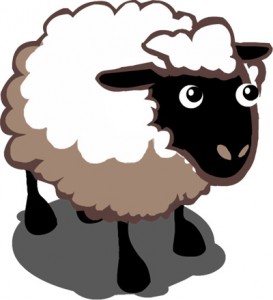 Last week I was at the post office, mailing an armload of stuff that should’ve been mailed a month earlier, and saw something run across the floor.  It was in the back, where the workers work, and was moving at an accelerated clip from right to left.

“I think you guys might have a mouse problem,” I told the cashier.

A chipmunk??  In the post office?  Well, she certainly seemed to be accepting of the situation…  Were there beavers back there too, building dams with shredded Dominos ads, and slapping mail bags with those big tails and whatnot?  A freaking chipmunk!?

Just as soon as she’d relayed this information, in a bored tone, the little bastard ran out into the middle of the floor and stopped.  It felt like he was taunting me: “That’s right, bitch, I LIVE here.”  He held that position for a minute or so, occasionally twitching and facing a different direction, and ran off again.

Weird.  A few minutes later I saw a postal employee walking through that area, absentmindedly stepping around the chipmunk(!), and continuing on his way.  What the hell, man?

And I’m going to use that as the basis for the Question of the Day…  In the comments section, please tell us your stories about “animals in places they shouldn’t be.”  I have three that jump immediately to my mind, and I’ll briefly tell you about them and turn it over to you guys.  Sound like a deal?  Good.

Years ago, my parents used to go to some fancy-ass hotel in Lexington, KY for weekend getaways.  Usually there would be a whole gang of them, and they’d go to this place and decompress.  Truthfully, I don’t fully understand.  Lexington?  Exotic!  Hey, whatever.

Anyway, on one of these visits an aunt and uncle were there.  And one morning my uncle opened the door to his room, and a giant sheep ran in.  My dad told me it was enormous, and brown.  It ran straight to the bathroom, and got into the tub.  It was so big it completely filled the bathtub, and just sat there.

And this door he’d opened… It wasn’t facing the outside.  This wasn’t a motel, it was an expensive HOTEL.  So, what the??

Later they found out some teenagers had put the sheep inside the building as a joke.  And the employees had a heck of a time getting it out of that bathtub.  I guess it was snapping at them, and stuff.  Heh.

Is that bizarre, or what?

And when I was a young kid a rat got into our house, through the dryer vent, and was racing from room to room.  My dad had it cornered with a baseball bat at one point, and it reared up on its hind legs and hissed at him.  Scary!  I think my mother propped open the back door, and my dad coaxed the hideous thing out.

Yeah, I’m still in therapy over that one…  Not really, but it was terrifying.  The hissing… the yellow teef…  I didn’t much care for any of it.

And finally, Bill and I were driving through Dunbar one night, many years ago.  We were drinking beer, needless to say, and had the windows rolled down.  April Wine was probably blasting from the tape deck… when a freaking bat flew into the car!

It was inside, flapping around ‘n’ shit, and we both began screaming and hollering.  I whipped the wheel violently to the right, and we abandoned ship before the car was fully stopped.  What the crap??  We looked inside, and the bat was now perched on the back of the passenger seat, its wings moving slowly up and down.  It was also brown, and also hideous.

I think Bill threw something at it, and it finally exited the car.  And that was certainly an unusual turn of events…  For some reason we both started laughing, and couldn’t stop.  I think it was adrenaline or something, but we just kept laughing and laughing.

And now it’s your turn.  In the comments, please tell us your stories about “animals in places they shouldn’t be.”