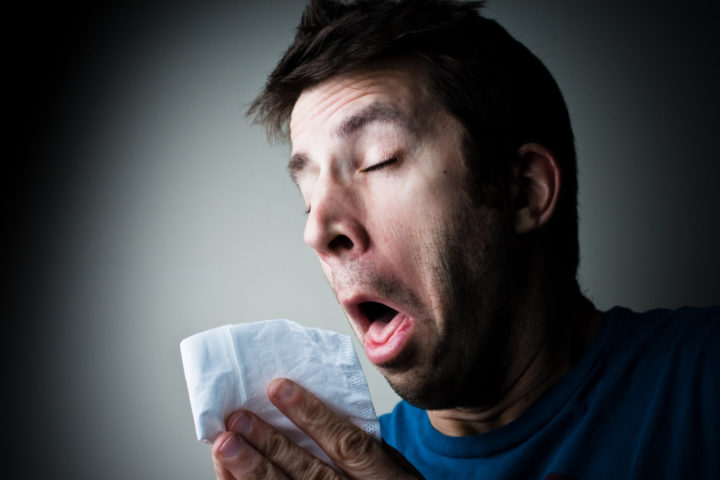 I have some kind of allergy situation going on, and am not a fan. I don’t know what’s triggering it, here in mid-August. Somebody said ragweed, but I got the impression he was just pulling that “information” straight out of his ass. In any case, there’s a constant crystal-clear drippage and itchy eyes and a lot of sneezing. It seems like whenever everybody else is hocking and hacking and blowing their noses, I’m perfectly fine. Then I pay for my smugness during late summer.

Are you allergic to anything? I don’t have anything major in that category, except this crap that’s going on right now. Also, I’m prone to a rash on the inside of my right elbow. It’s happened all my life, at random times. It feels like an allergic reaction to something, but all the armchair doctors I’ve encountered think it has to do with heat or humidity. In fact an actual doctor told me that once, as well. “Yeah, that’s a heat rash,” she said during the third second of her extensive four-second examination. I reject her findings. It’s some kind weird reoccurring allergic thing that I’ve been getting for more than 40 years. It only happens on my right arm, and can kick-in during the dead of winter or the height of summer. But whatever.

What are you allergic to? Tell us about it, won’t you?

And have you ever gone to one of those doctors who supposedly pinpoint the exact stuff that triggers your own personal snot factory? Everybody I know who’s done that has a ridiculously long list of things they’ve clearly memorized and seem exceedingly proud of. It always starts with “dust,” for some reason.

I’ve never been to a so-called allergist, or a chiropractor, or a sleep clinic, or a person who speaks with the dead. Is it unfair that I put all of them in roughly the same category? Probably, right?

I did go to a palm reader once, while semi-drunk, in California. He told me, basically, that my current marriage is doomed and I will remarry and start a second family during my 40s. I thought that was pretty weird, and never mentioned it to Toney. At least not until I was out of my 40s. What in the knuckle-cracking hell??

What niche “doctor” have you visited? I’m not being very respectful, am I? Oh well. How about hypnotism? Aroma therapy? Acupuncture? Did any of it help, long-term?

I worked with a woman who went to an acupuncturist to stop smoking. She’d go to his house, late at night, and there would be people sitting there waiting to see the guy, with envelopes full of money. I think he pushed a thumbtack through one of her earlobes, and she SWORE it cured her for good. Fast forward four months… and she’s outside chugging cigs again on all her breaks. Perhaps she required a maintenance therapy that involved stapling a piece of notebook paper to her upper thigh? Admittedly, my knowledge is limited.

Also, what curious things do you notice people being smug about? Like me and my lack of springtime allergies? I can come up with one, right off the top of my head: folks with unlimited data. Smug motherfuckers… Also, people who have had a lot of surgeries, and have rods and shit. Know what I mean? You can see the twinkle in their eye when they start talking about that stuff.

I need to go now. Another work week awaits! My nipples are exploding with delight.