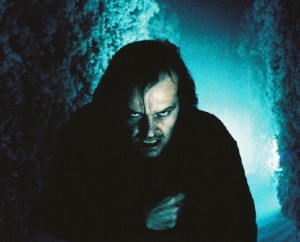 I really need to get out of this house.  I’ve been in front of a computer since Thursday morning, more or less, and it’s starting to take its toll.

I burned a vacation day on Sunday, and made an attempt at using the long weekend to knock a few items off my ever-expanding to-do list.  And even though I didn’t get everything done, I accomplished more than usual.  So, I’m pleased.

However… I feel strange and cut-off from the world.  I’ve been sitting in this babyshit green room for days on end, with my iPod on shuffle play (Dinosaur Jr. to Glen Campbell to REM to Benny Goodman…), to the point of almost complete isolation.  I’m starting to lose it, man!

It would be a gross exaggeration to say I’m looking forward to going back to work this evening, but it’ll probably do me some good.  ‘Cause I think I’m about twelve hours away from building shit-castles in the middle of the living room floor.

Our weekend roll call (ongoing) was amazing.  Thanks to everyone who told us where they’re reading the Surf Report.  Over 320 comments!  It must be a new website record, right?

I tried to make some sense of everything here, and it appears we haven’t yet had Surf Reporters check in from Connecticut, Delaware, Hawaii, Kansas, Montana, South Dakota, Vermont, or Wyoming.  Anyone reading from those places today?  If so, please log it in Thursday’s comments.  We need a full 50-state representation.

And thanks to everyone who participated.  It’s been fun, and mind-blowing.

Thanks especially to folks reading outside the U.S. and Canada.  I always wonder how my ridiculous adventures in suburbia translate in foreign countries.  But some things are universal, aren’t they?

Today our second weekly recap email is going out to subscribers of the mailing list.  I didn’t really know how it would be received, but I’ve gotten lots of positive feedback.  So, I’ll keep it going.

If you’re not subscribed yet, what are you waiting for?  You’ll not only receive the recaps, but also access to periodic super-secret updates.

And just so you know… we’re due to have “visitors” during the coming weekend.  Which means there will likely be bonus material for subscribers soon, very soon.

A few nights ago Toney had something to do in the evening, and the boys and I were on our own for dinner.  She suggested I use a Pizza Hut coupon, and buy several medium one-topping pizzas for $5 each.

I don’t like giving Pizza Hut my business, in an area loaded with incredible mom ‘n’ pop pizzerias and spaghetti houses.  It’s like going to a bar with 25 microbrews on tap, and ordering Coors Light.  It’s almost criminal.

I did, however, like the idea of doing dinner cheaply, and took her advice.  But only one topping?  That’s quite limiting for a man of size…

After stewing about it for a few minutes, I decided to take the easy way out and ordered my pie with pepperoni.  If you could only choose one pizza topping, what would it be?  I feel like my choice was unimaginative and predictable.

And the $5 Pizza Mia?  I thought it was pretty darn good.  For five bucks I was expecting something from a microwave, like at Chuck E. Cheese or a baseball stadium.  But I was pleasantly surprised.  MUCH better than Coors Light.

Last night I was trolling the internet for my daily ration of fucked-upness, and found a short video clip of what appeared to be eight naked Japanese women blowing something liquid out of their asses, onto another naked Japanese woman suspended from the ceiling in a leather harness.

Yep, that’ll do it.  Mission accomplished!

But it got me to thinking…  How long has it been since I’ve been truly astonished by something I saw on the internet?  The bar has been set incredibly high at this point…  If I’d watched that video clip in 1979, my head probably would’ve exploded.  Now?  It was certainly worth a chuckle, but I didn’t even send a link to my friends.  I’m sorry, but it takes more than just a twenty-one ass salute.

Without getting overly graphic and disgusting with it, please use the comments section to tell us about the most recent shocking thing you’ve discovered on the internet.

And I’m going to turn it over to Metten now, and drag myself out from behind this computer, before my skin starts meshing with the chair.