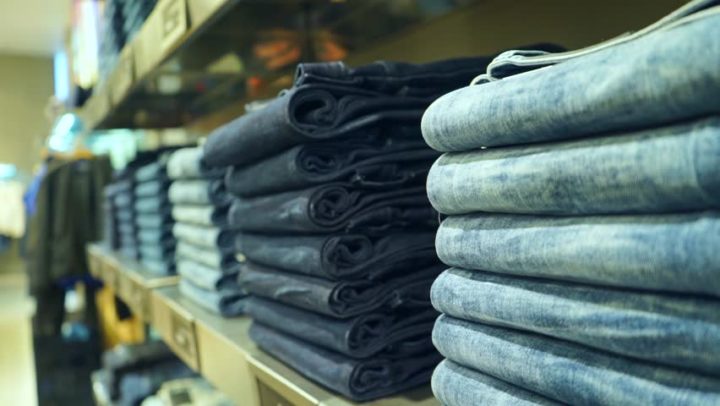 I’m having a jeans crisis. As you guys know, I regularly blow the full ass out of them and need to keep purchasing more. But the ones I like are becoming more and more difficult to find. So, I’m always behind the denim eight ball, forced to buy mysterious brands and unknown styles. And I can’t have that. The ones I like have a specific feel, and a specific fit. But if I buy something else — even if it’s expensive Levi’s or whatever — they’re odd, and I end up walking around adjusting and tugging. Just like when I was going through a horrible underwear crisis a few years back.

A couple of weeks ago I thought I’d found a pair of my old faves at Target, and they were my size. So, I snapped them up, but there’s something off about them. It’s the material. It seemed like the regular stuff, but when I put them on it felt like I was wearing sweatpants. And after about an hour the waist felt like it had increased in size by a full two inches. WTF? I needed suspenders. They’re weird, man.

Like I say, I’ve dabbled with many brands, and none are quite right. Often it’s the location of the crotch nexus. Do you know what I’m talking about? I’m not sure if that’s the actual name of it, but it’s where everything comes together… down in the crotch area. It forms a knot where all the fabric overlaps.  And that thing is sometimes too far back. Or at least it feels like it is to me. A properly located crotch nexus is very important. Also, the sizes are completely wacky from brand to brand. I know what size I wear, at least with the old standbys. But when I buy that same size from a different manufacturer, it’s off the wall.

I don’t need this aggravation. I might have to look into buying jeans by mail, which seems ludicrous to me. Hell, it would be such large amounts of fabric God only knows what the shipping would cost. They might have to send them in by rail. It’s something I’d have to look into. And I don’t know the model number, or whatever. Who knows the model number of their favorite pants?? This is bullshit. I’ve been buying the same jeans for 20 years, now they’re nowhere. I’m getting pissed just writing about it. I’m thinking about seeing a counselor.

I was in the bunker last night, moving some shit around, and I spotted something that made me feel a little ashamed. Or sad, maybe. It’s a digital camera I bought, maybe ten years ago. And that bastard was expensive. For me, anyway. My inner-sensors are saying $500. Something in that neighborhood. I also sprang for a fancy-ass bag to carry it in, which was another $70 or somesuch. I mean, this was a significant purchase. I don’t drop that kind of money very often, mostly because I don’t have it. I never have it. But anyway, when I bought this camera I did months of research, and read everything there was to read on the subject. And I finally pulled the trigger on it. …And never really used the thing. I mean, I probably snapped less than 100 photos with it. I had a little $99 Nikon that I was upgrading from, but continued to use. Due to the fact that it was much more convenient and easy, and took fantastic pictures. So, I basically wasted almost $600.

And I’m off from work for five days in a row after today. There’s also an option on the table to turn it into six days. Oh, I’m toying with that option, my friends. In any case, I just have to complete my day today, and I’m free! For a little while, at least.

Before I say farewell here, I need to remind you about the Amazon links. Please don’t forget to pass through one of our links, any of them, before doing your holiday shopping. Or your personal shopping… whatever. Just click through, and shop as normal. It’s very easy, and it’ll cost you nothing extra. But it helps me a great deal. Thank you guys!

Also, I posted a new podcast episode at 12:01 am today. It was one of the more difficult episodes for me to record, ’cause I was going against my hardwired instincts during the whole thing. It’s available to patrons right here. And here’s your summary:

I’ve been getting feedback from listeners who tell me I use the phrase “ya know?” way too often in the podcast episodes. I was skeptical, so I listened to a couple of recent installments. And sweet Maria! You guys are right. So, I’m attempting to rid myself of that phrase. I tell you all about it in this one, and struggle to refrain from using the words. Needless to say, there are plenty of barely-related jags as well, and all the normal nonsense. Thank you guys for the support, and thanks for listening!

I’ll be back on Monday, my friends.