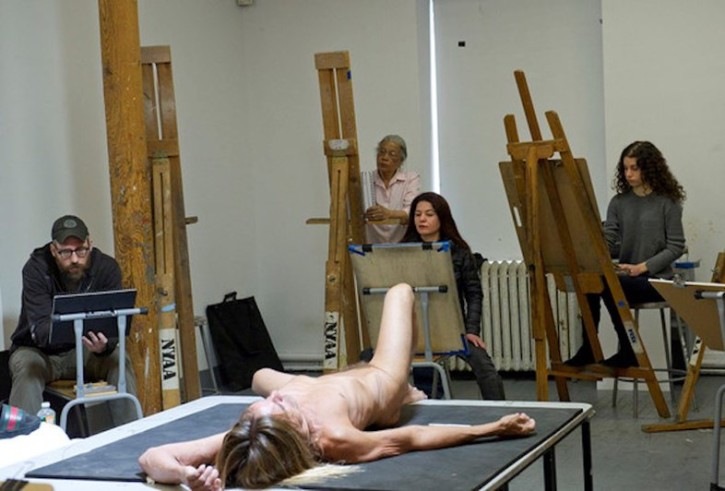 Have you seen this?? It’s Iggy Pop posing nude for artists at the New York Academy of Art. I read a headline about it several days ago, and thought, “Yeah, OK.” All my emotion sensors are burned out by now, and this is my reaction to most “amazing” things.  Then I saw the photo above… Good god! Clearly, a couple of the sensors are still functioning.

Why that pose? You know his balls are resting on the surface of that ping-pong table, or whatever it is. Somebody probably had to Mr. Clean the smudge away, after he left. The scrotal elongation must be approaching critical mass by now. The man is nearly 70 years old! Talk about your low-hanging fruit. Unless, of course, he’s had a nut-lift or a scrote-pleat, or something similar.

And I love the serious expressions on the faces of the artists. I’d be shouting in protest, and probably covering my mouth and nose with my hand. I don’t know… I just assumed he was standing on a box, naked. This “splayed like he fell off a fire escape” pose actually managed to surprise me, which isn’t an easy thing to do.

They’re going to feature the drawings at a museum in Brooklyn, and then send them out on tour? I guess I know what I’ll be getting my mom for Mother’s Day this year!

Toney sent me a link to this video, and I ended up watching it three or four times, because it’s so accurate and perfect. What in the world is going on?! The delicate flowers have, quite literally, never heard a discouraging word.

And it appears the generation after the Millennials is even worse. Somebody wrote ‘Trump 2016’ on sidewalks in chalk on the campus of Emory University recently, and the student body was plunged into crisis. I assume they had to retreat to their “safe space” and watch Spongebob, do some therapeutic coloring, and down a few juice boxes? Diversity is extremely important to these kids, until it comes to ideas and opinions. Then, not so much. Even Bill Maher is disgusted.

Every few decades those delightful Germans decide it might be a good idea to take over the entire world by force. Next time they’ll likely be able to accomplish it by simply shouting unsanctioned phrases, and leaving the guns at home. Wotta a grand gang of pusslets. 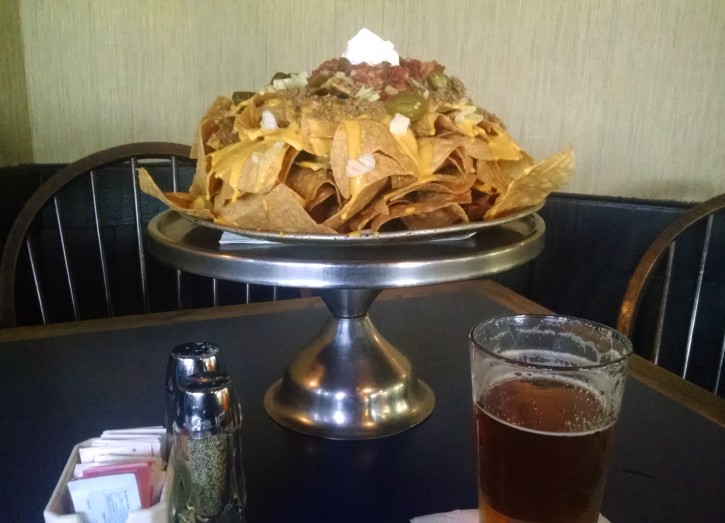 Over the weekend Toney and I had two restaurant meals that featured outrageous serving sizes. This one is an appetizer called the Nachos Pile, from JJ Bridjes, a restaurant/bar near our house. I don’t like that extra J in their name, but am willing to give it a pass. I’m not happy about it, mind you, but they do a lot of stuff right there. In any case… when they brought this thing out, heads were turning. I’m not sure why they felt the need to incorporate an elevation device, but that made it even more ludicrous.

The shit was fantastic, though. The price? $10.95. The beer is a Dogfish Head 60 Minute Ale, which were five bucks per pint. We each had two. So, it was one of those deals where I asked Toney, “Wanna go get a beer somewhere?” and it ended up costing us 40 dollars.

The other craziness was our first visit to Primanti Brothers. It’s a Pittsburgh institution, now with a location here, famous for their enormous sandwiches. I just got ham and cheese, and almost had to unlatch my jaw like a snake. They put french fries on the sandwiches, which is interesting, I guess. But that was the only questionable part of it. Next time I might ask them to hold the fries. I realize that’s probably blasphemy, but there was something slightly off about the whole affair. And I think it was the fries on the sandwich. Not so much the taste, but the texture. Or maybe the temperature? I’m not sure, but I’m going to have to tinker with it a bit. 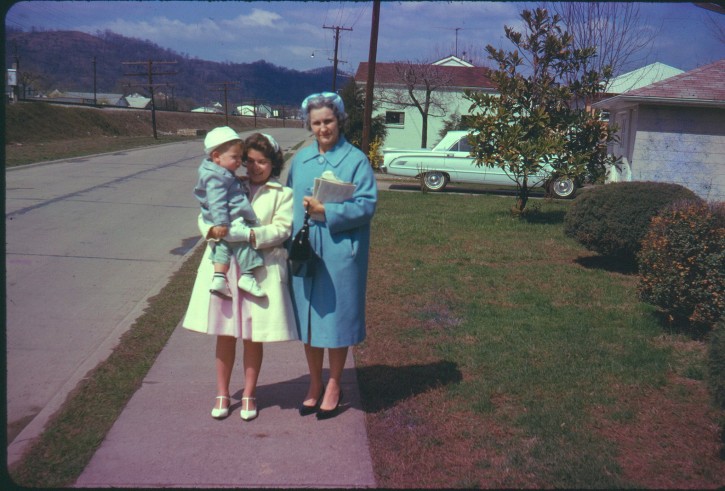 Finally, this is a picture of me, my grandmother, and Aunt Pam. It was taken on Easter, a few years back. I feel a little weird including a photo of my sainted grandmother — one of the finest people I’ve ever known — alongside Iggy Pop and his gaping anus. But they’re adequately separated, I think.

For the record, I didn’t wear a hat this year. In fact, Easter 2016 was about as low-key as it gets. Toney worked part of the day, and I wallowed around on couches in a disgraceful manner. After she was finished with her shift, we went looking at new cars. You know, when the dealerships are closed and the mustachioed and divorced salesman aren’t around? It was fun, but dangerous. If we start doing stuff like that, it’s only a matter of time before we’re in the small room signing papers again.

How was your holiday? We spent Easter 2008 in London, I recall, and it snowed. This one was a lot less memorable. What about yours? Tell us about it — or share your thoughts about any of the other stuff above — in the comments section.