I’m not a tattoo kind of guy. I have no problem if somebody else wants to get one, or 27. I mean… whatever. But it’s not for me. My ass is not a canvas, thank you very much. Although there’s enough room for a mural. A tattoo artist (are they all named Snake?) might take a look at all that real estate and swoon. But, no thanks.

However, it’s fun to think about what “ink” (I’m very cool) I would’ve chosen at various times during my life. I thought I’d quickly take a shot at three specific ages, and what I suspect would’ve been my choice or choices during each period of my life. Then I’m gonna turn it over to you guys, and hope you’ll do the same.

When I was 10 I know for a fact that this, or something very similar, would’ve been my first choice. I was fully obsessed with baseball, especially the Cincinnati Reds. I went to my first game when I was nine, so I was already experiencing the mania by 10. And the thing about it? I’d still be cool with it today. God knows there could’ve been worse choices. 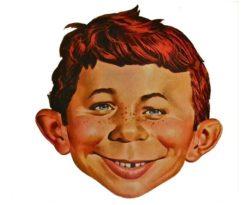 The only other possibility would be this one, of course. At 10 I was also fully invested in MAD magazine, and all that entailed. Including sarcastic remarks around the house, a cynical view o’ the world, etc. Ahhh… MAD always felt so right. Still does.

By the time I reached 20, I probably would’ve gone with something like this. It might be the first one I regret of my imaginary tattoos. Not that I have a problem with The Clash — I still love them, of course — it’s just the whole idea of having a band logo. Ya know? It’s fairly hack. Or am I wrong about that?

Here’s another possibility from the age of 20. Hey, I’m just basing it on my main areas of interest at the time… For some reason, I went through a period when Rolling Rock was “my beer.” I’m very embarrassed by all of it. The fact that I chose R-squared, as my friend Cambo used to call it, and that I even had a “my beer.” Stoopid. This one I would definitely regret.

And finally, at age 30 there would’ve only been one choice. In fact, it’s the only one I ever actually considered. I used to go out drinking with Mark Maynard and he’d attempt to talk me into it. He had me close a time or two. But come on… As I said, I’m not a tattoo kind of guy. I don’t think I’d COMPLETELY regret this one, though. OK, maybe. It’s hard to say.

What do you have on this? Anything? I know most 10-year-olds don’t get tattoos, but what would’ve been your choice? And keep going up by 10 years, and let us know your thoughts for each era. I could enable images in the comments here, but somebody would upload an extreme closeup of a vagina within four minutes. So, just describe it, if you don’t mind.

And before I call it a day here, I want to direct you to the latest episode of the podcast. Right here. And this is the summary:

In this one, I describe the circumstances that led to me leaving a beloved job in Greensboro, NC and moving to Atlanta — one of America’s most intimidating cities — with no means of support and a horrible apartment rented sight-unseen over the phone. During the first few weeks, I was freaking out, man! I hope you enjoy it. Please let me know.

Here’s a half-assed graphic I made for it… last night, after a few adult beverages (not Rolling Rock): 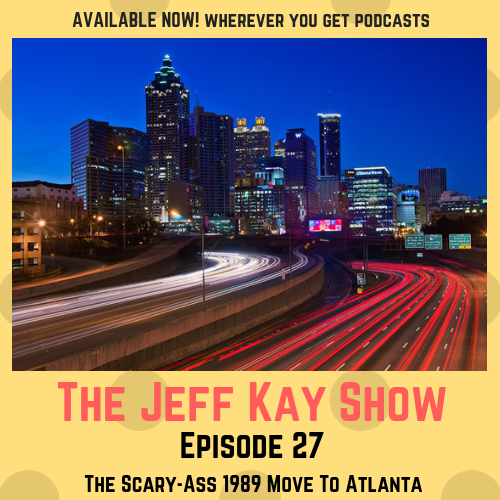