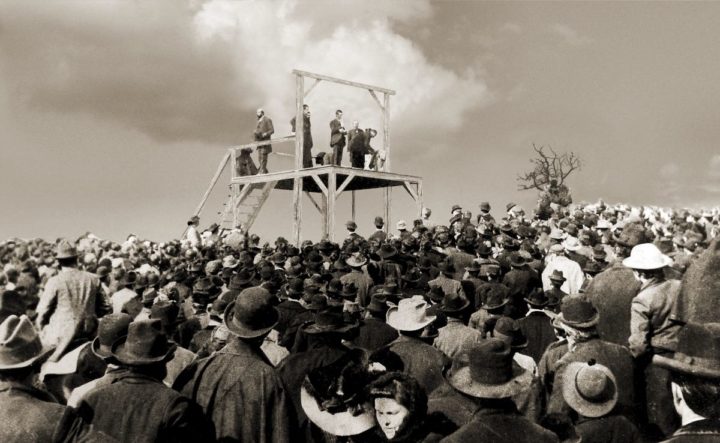 I saw this photo on Facebook a few days ago. It was reportedly taken at the last public hanging in West Virginia, on December 16, 1897. Apparently the event turned into a drunken free-for-all, and resulted in my home state becoming one of the first to ban public executions.

Here’s a short article about it, this is a longer (far more bizarre) one, and here’s a song about the event, by Flatt and Scruggs. I guess that shit was crazy?

And I can’t even imagine going to something like that. Am I alone? Watching some guy suffer and die, as a crowd of drunken hicks holler and taunt and clap their hands like Bryan Adams just launched into “Summer of ’69?” I believe I’ll pass.

Even today, when they execute a prisoner, there’s a small “gallery” as they call it. Why?? Maybe if someone was directly involved in the case, and victimized by the person… But I don’t think I’d be interested, under any circumstance. It’s not a scene I need replaying in my head for the rest of my life, thank you very much.

When we were in England we were on a tour, and the guide told us that hundreds of people were hanged at a certain spot in London, and it was always a big social event. In fact, he said, people would get feather bed-shitting drunk at these outdoor death festivals, and feel like crap the next day. And that’s where the word “hangover” came from.

I find it bizarre. Oh, I’m not going to shed any tears for murderers or rapists, but I don’t need to watch their final sufferings, either. Sweet sainted mother of Ted Bessell. People apparently used to pack up the whole family though, and make a day of it. “He’s almost done fer, Johnny! The spasms are coming pretty far apart now.” It seems weird to me.

I know, however, that public executions would draw HUGE crowds, even in 2017. If they brought them back, thousands and thousands would attend. There’d likely be a Bud Light tent, and hot dog vendors. Maybe a VIP section, or a “snakepit,” like at Metallica concerts. The hangee would probably be required to wear a shirt with an advertising logo on it (State Farm? Carl’s Jr.?), and Ryan Seacrest would almost certainly be the host. Am I wrong?

I didn’t intend for this whole update to be about hangings, but whatever. I’d like to get your thoughts. Please don’t get into politics, ‘cause nobody gives a shit and it’s highly annoying. But what are your opinions on personally attending an execution? Is it something you’d like to do? Maybe it’s something you’ve actually done? If so, we’ll need to get your story. Also, what do you think would happen at a modern public execution? Beyond Seacrest, I mean?

Finally, how do you think they’d capitalize on our renewed enthusiasm for public death? What would the promoters come up with next? Maybe a soothing lazy-river ride through a giant slaughterhouse in the midwest? Please help me out, won’t you?

And I’m going to call it a day, my friends. This is a strange one, I know. Please make of it what you will.