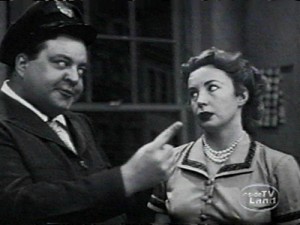 A few days ago I was driving to work, and started thinking about Jackie Gleason. Hey, it happens from time to time…  Specifically, I was remembering The Honeymooners, and how Gleason’s character – Ralph Kramden – was always threatening his wife with a punch to the mouth.  “…Right in the kisser!” he’d roar.

The 1950s audience would laugh and laugh, and I was wondering what might happen if a current show featured a fat blue-collar worker who threatened to knock his wife to the moon, at the slightest provocation.  Then I thought:  “Well, maybe on cable…  And maybe if it was a ‘dramedy,’ so the producers could claim they were trying to encourage an important national dialogue about spousal abuse… or some such thing.”

From there, I began thinking about other sitcoms, and how they might be adapted as modern-day cable dramas.  And below I’ve tried to come up with a decent pitch for a few of the old shows.  Remember, this would happen in an imaginary world where the original sitcom doesn’t exist, but I am trying to sell the premise of each to FX, HBO, Showtime, AMC, etc. as a drama. 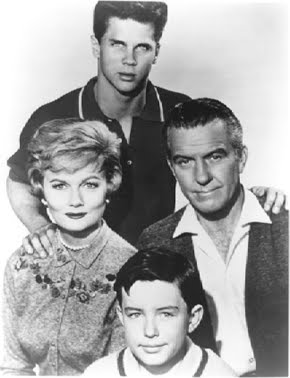 Leave It To Beaver  From the outside, the Cleavers appear to be a wholesome American family: a caring father, a loving mother, and two teenage boys – all living together in a beautiful suburban home. However, looks can be deceiving…

Ward, the patriarch, is a proud and brutal man who runs a successful slaughterhouse on the edge of town.  He wants nothing more than to be perceived as an upstanding pillar of the community, and rages whenever that illusion is threatened.

His wife June cheerfully provides meals to the retarded daughter they keep hidden in the basement.  The girl is named Dolores, but is referred to as “The Reet.”  The family’s friends and neighbors sometimes hear strange noises coming from the house, but have no idea the daughter exists.

Wally and Theodore (aka “Beaver,” short for “Beaver Fever”) are troubled youths, who have successfully intimidated most of Mayfield.

Wally heads up a group that deals Oxycontin to high school students, and Theodore is a chronic masturbator who installs hidden cameras in bathrooms and locker rooms, all over town.  When the devices are discovered, nothing is ever done, for fear of retribution at the hands of Wally.  Around Mayfield, the brothers are sometimes referred to as Uday and Qusay.

At the end of the opening credits, Wally, Theodore, and two of their confederates – Lumpy and Whitey – are shown walking toward the camera in slow-motion, before a massive explosion occurs behind them.  Then, in large red block-letters that fill the screen:  Leave It To Beaver.

The show is a statement about the strange, twisted lives that are often secretly played-out behind perfect facades.  It is narrated by a boy named Eddie Haskell, who used to live in the neighborhood, before foolishly needling the younger Theodore (calling him Squirt, and Creep), and ending up as a zip-tied corpse in a rock quarry. 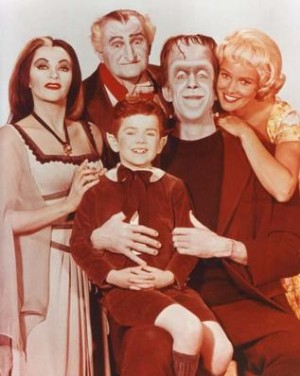 The Munsters  This family of monsters (named Munster) is forced to keep moving from town to town, because the grandfather refuses to abandon his vampire heritage and continues to “feed” on a regular basis.  Herman, the head of the family, is exasperated by the old man, and his stubbornness.  They have numerous arguments about tradition, and the importance of respecting the old ways.

Herman desperately wants the family to integrate into modern American society, but Grandpa refuses to play along.  He prowls the streets of whatever new town they happen to be living in, and feasts on an unsuspecting pedestrian three or four nights per week.  He repeatedly creates a pile of bloodless husks, and a police force looking for answers.

This dynamic is further complicated by Eddie – the son of Herman and his wife Lily – who also happens to be a vampire (it skips a generation).  Grandpa doesn’t encourage Eddie, but doesn’t discourage him, either.  As the boy reaches puberty, local farmers begin to tell of mutilated cattle found in their fields.  Lily says nothing, but is disturbed to find Eddie’s bed sheets stained with more blood than usual.

Herman, who was created from human scraps in a laboratory, is also the victim of prejudice at “the plant,” where he works.  The other men mock the size of his lunchbox, and his effeminate manner.  They say he was clearly given a “fag heart,” which upsets him greatly.

During one such episode Herman begins stomping his feet in frustration, and saying, “Oh darn, oh darn, oh darn, oh darn…”  His super-human strength causes the ceiling to collapse, killing two of his co-workers, and causing a third to be confined to a wheelchair for the rest of his life.

In addition to Herman, Lily, Grandpa, and Eddie, the family also keeps a prisoner on-hand – always referred to as “Marilyn” – to provide spare parts for Herman.  Once the prisoner has been stripped-down to a hollowed-out torso and head, they discard it and grab another Marilyn from the streets.

Herman burns through body parts (and Marilyns) at an accelerated clip, and Grandpa demands to know how it’s any different than his own late-night outings, for which he’s regularly criticized. 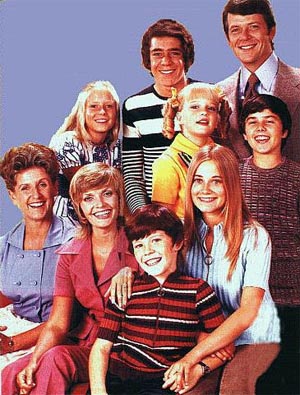 The Brady Bunch  After Mike Brady’s wife is burned to death in a swift-moving industrial fire, he hooks up with a divorcee named Carol Martin, and they form a blended family.  He has three sons, and she has three daughters.

Mike is a successful architect, and they move into a large home of his own design.  It was supposed to be for him and his first wife, but she is dead now and there is no reason to ever mention her again.  Same goes for Carol’s first husband, who was clearly such a monster he wasn’t granted even supervised visitation rights of his own daughters.  The details of his atrocities are left to the imagination.

At first the new family has difficulties, stemming from the fact they are all being forced to live with, essentially, a gang of strangers.  It doesn’t help matters that the kids – both boys and girls – have to share a weird Jack ‘n’ Jill bathroom, with no toilet.  There is major conflict when Peter innocently walks in one day, as Jan is awkwardly defecating into a Quaker Oats box.  Mike is forced to convene a Brady Family Meeting, to quell the uproar.

But, after everyone gets their sea legs, things settle down.  Sure, there are occasional problems, like with any family, but it only serves to bring them closer together.  Here are a few of the young family’s challenges:

And that was fun…  If I’m unable to hook a cable network with one of those pitches, I’ll do three more next time.  And if you enjoyed it, I’d very much appreciate a mention at Twitter and/or Facebook.  If you’d like, you can even use the handy buttons below.

Thanks, and I’ll see you guys next time.